Nearly 900 Palestinians have been detained this last month since the beginning of the clashes with Israeli Forces. 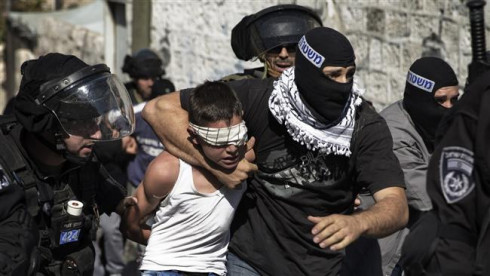 Latest riots in the West Bank, East Jerusalem and Gaza between Palestinians fighting occupation and the Hebrew Army, not only have left almost 60 Palestinians dead but also a big number of arrests this last month.

As informed by the NGO Addameer, until now Israelis have arrested 867 Palestinians on October, 500 from the West Bank, 213 from East Jerusalem and 152 from Israel. This information was confirmed by the Palestinian News Agency Maan.

There’s a disturbing fact about this detentions, 130 of the prisoners are kids, many of them are not even over 12 years old and still they are taken as criminals by Israeli Forces.

Riyad Al Malki, Palestinian Minister of Foreign Affairs said during his statement in the UN Security Council that the source of all violence happening in the region is the Israeli occupation in the zone besides its protection and support to extremist groups generating fierceness against Palestinian citizens.