One of the main topics in the U.S. and the Scandinavian countries summit was the Russian threat. 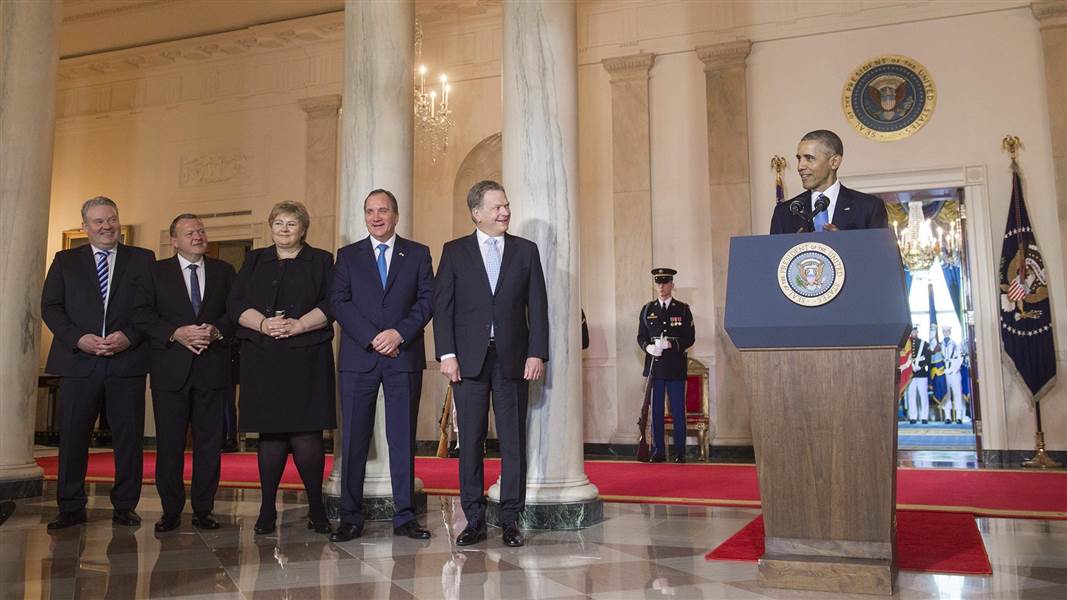 On May 13, the U.S. President Barack Obama met the leaders of the five Nordic countries – Denmark, Iceland, Finland, Norway and Sweden in the White House. The meeting was a continuation of the summit, which took place in Stockholm in 2013. At that time, in a joint communications effort, the participants condemned the use of chemical weapons in Syria. According to the White House Press, the summit allowed cooperation between the U.S. and Nordic countries to continue on a wide range of issues, including the fight against terrorism and extremism, environmental protection, work coordination on Arctic issues, nuclear security and migration crisis.

In fact, the main theme of the event was methods of deterrence of the “Russian aggression”. The demonization of Russia in Northern Europe and rising tensions in the Baltic and Arctic directions became convenient excuses for partnership expansion of Northern Europe with the U.S. and NATO.

“To Save the Baltic States”

An online site War on the Rocks has an article that is dedicated to the U.S. and Nordic countries summit, with an unoriginal title “Bear in the Room”, which of course implies Russia. Denmark, Iceland, Finland, Norway and Sweden are simply obliged to help the U.S. to “protect” the Baltic States and to force Russia to return to “more constructive” relations with its neighbors. “ In order for the summit to be successful, the heads of these six nations must carefully discuss measures to further curb Russian aggression, including methods of intimidation and improving interaction with each other”, says an author of the article, a U.S. Navy officer, Mark Sype.

It must be mentioned that there is no ground on which the allegations of Russian aggression in the region can stand. The “Annexation” of Crimea that so alarmed the Baltic and Nordic countries does not carry a threat. Other actions that are being attributed to Russia are responses to unfriendly steps taken by Nordic countries and NATO. This is how an incident in the Baltic Sea where the US destroyer “Donald Cook” became a victim of a Russian Air Force attack simulation became a type of a response to a civil aircraft of Minister of Defense Sergei Shoigu being escorted by NATO Eurofighter Typhoon aircrafts over the same Baltic Sea.

There was also a warning from the Foreign Minister Sergei Lavrov that in case Sweden joins NATO, the Russian Federation will be forced to increase forces facing Western borders. Russia is already preparing for NATO to restrain itself, because a new generation of missiles will soon be ready to be placed in the Arctic and the Russian Northwest. And there is no reason to confuse what is cause and what is effect here.

Nevertheless, an American military doctrine is set to ensure that the US’s Nordic partners are simply obligated to participate in “intimidation” of Russia in order to promote the security of that entire region. The US National Security Senior Board Director Cliff Kupchan, in turn, said, “The Administration is determined to send a signal that the U.S. is deeply involved in the region’s security, and we will be actively discussing what steps we can take collectively in order to improve the situation”.

In the mean time, it is Washington’s opinion that not everything is going smoothly in the partnership between the U.S. and Northern Europe. Sweden and Finland are maintaining a neutral status, which makes coordinating their military with American counterparts more difficult. A potential issue is the involvement of these countries in NATO’s plan to “save the Baltic states” from Russia. A talk about Sweden and Finland’s entry into NATO has been under way for two decades, but thanks to the anti-Russian information campaign, today, the majority of Swedes and Fins are in favor of their country joining the military alliance. One of Obama’s northern summit’s unadvertised goals is to further pull Stockholm and Helsinki into NATO.

Status neutrality did not become a hindrance for an expanding partnership between NATO and the Nordic countries. In March, a large-scale military exercise “Cold Response – 2016” with the participation of Norway, Finland, Sweden, Denmark, Latvia, Poland, Belgium, Netherlands, Germany, Great Britain, France, Spain, Canada and the U.S. was held.

To have a partnership in the field of Defense between Denmark, Iceland, Norway, Finland and Sweden, the NORDEFCO organization (Defense Partnership of Northern European Countries) was created in 2009. The armed forces in these countries have reached a combined total of 84 thousand, and the mostly American-style military equipment is keeping similar characteristics. Today NORDEFCO is under the complete cover of NATO and Washington.

Norway and the U.S. maintain a particularly warm relationship, where questions on the Arctic remain key. It wasn’t that long ago that an American-Norwegian project on new signals station Globus III, which will be able to observe the Northern fleet became known. A Norwegian Defense Minister Ine Eriksen Sereyde urged NATO leaders to strengthen their military power and their presence at sea and to develop mechanisms to control Russia.

The U.S. is still unsatisfied: a permanent and a more significant military presence is needed in Northern Europe. This alignment may be revised “if the Russian leadership will return to a more constructive way of relating to its neighbors”. Considering the currently underrated potential of the Arctic region and the ever-growing tensions near our Northern borders, it cannot be excluded that a new war can begin in the Northern latitudes. The summit, which is passing under Obama’s presidency curtain, demonstrates that the U.S. policy in Europe is unlikely to change in the coming years, while the expanding relationship, with its anti-Russian direction is of importance not only in Scandinavian countries, but also across Europe.