This article originally appeared at TheSaker

Russia has recently published her new official Naval Doctrine. The full document can be downloaded from the Presidency’s website here (in Russian).

To be honest, there is nothing earth shattering in this document. The document explains the purpose of this doctrine, the missions of the Russian Navy and includes a region by region review of the challenges and opportunities for Russia on the world’s oceans, including the Arctic and Antarctic regions. But there is one sentence which, I think, deserves a lot of attention. On page 20, in the section 54 it says:

Which I would translate as follows:

“A defining factor in (our) relations with NATO remains that for Russia the following is unacceptable: the alliance’s plan to move its infrastructure to the borders of Russia and the attempts to give the alliance a global role“.

As somebody who has translated Russian official documents for a living for many years I can tell you that the Russians are extremely precise in their use of words and that they choice of this or that word or expression is considered very carefully, often with a maniacal attention to detail. So when this official, President-approved, document says that it is unacceptable for Russia that NATO is trying to grant itself a global role – this is at least as official a statement as any public declaration by Foreign Minister Lavrov. Except for Lavrov was not tasked to deliver this message. Take a look at who was: 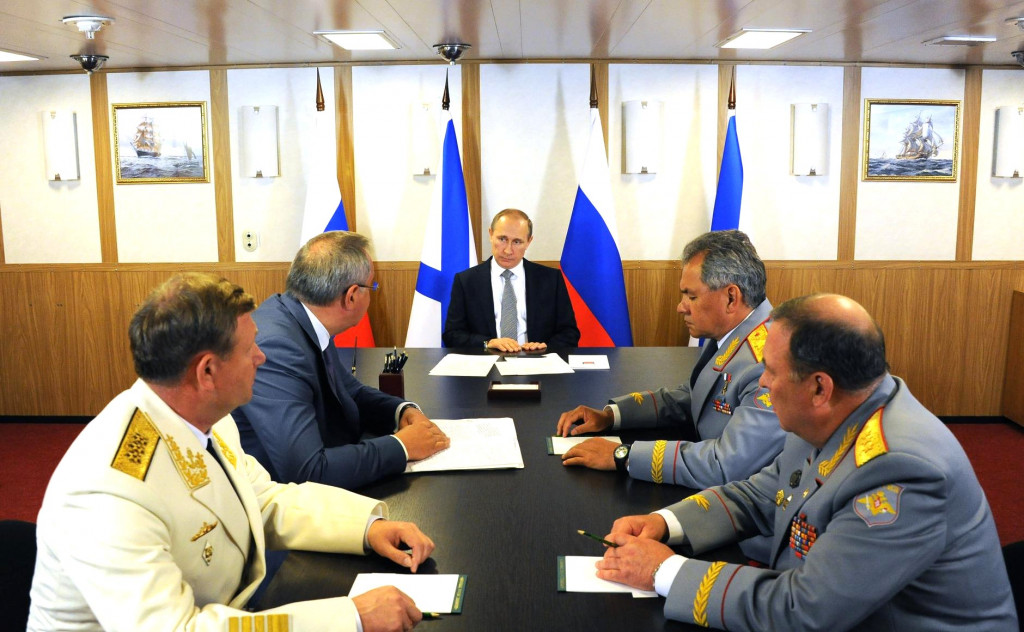 This photo was taken on board the frigate “Admiral Gorshkov” and includes Victor Chirkov, C-in-C of the Russian Navy, Dmitri Rogozin, Deputy Prime Minister of Russia in charge of military matters, Vladimir Putin, Defense Minister Shoigu and the C-in-C of the Western Military District General Anatolii Sidorov.  In other words, these are the men who would be in charge of fighting NATO should a war break-up. 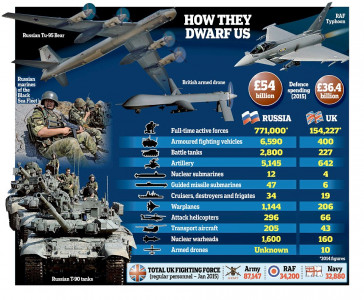 There is clearly a ‘message’ sent here, and it is not sent to Obama, Merkel or any other western politician, nor is it sent to the public opinion of any country, but it is a message sent to those who will carefully analyze this document and this event: US and NATO defense analysts and their bosses and, for them, the message is very clear: we will not let you prevail.

I have often written here that in the Russian culture making threats is seen as a sign of weakness.  So none of the above should be seen as the Russians threatening anybody.  The recent British and US hysteria about Putin threatening the West with nuclear war is utter nonsense.  In fact, the Russian warning is clearly tied to current hostile actions by NATO, namely placing NATO forces on the Russian border and trying to become a global, planetary, police force or, better, colonial pacification and authority enforcement force.  So all the Russians are really doing is going on the record and declaring that they will oppose and resist the AngloZionist attempts to subdue Russia or achieve planetary hegemony.

Putin recently gave an interview to a Swiss TV channel.  To the question “do you believe that a war in Europe is possible?” Putin replied “I hope not. But I really wish that Europe would show more independence and sovereignty and was capable of defending her own national interests, the interests of her people and her countries“.

I don’t know about you – but I find that “I hope not” very disturbing, to say the least.  Do you think that the people of Europe will ever wake up?

Just my opinnion as the answer for the rethorical question but.. Europe is kind of messed up, the young ones are trapped in facebook, twitter, and other social networks, (I see that every day I am one of them), old people cant use internet so they sit in front of TV most of the time and watch western sponsored news, and lets call it productive aged people are more afraid of their jobs, salary and families so they dont look up for independent news.. If they want to hear about whats happening in the world, again, they just turn the TV on and watch the channel with news in their language. They are not stupid, they could see trough this, but they just don’t get whole info about what is happening, they just see what sponsors want them to see. Sorry for english if I made mistakes ;)