The Dutch Freedom Party is working on a project for a referendum for the exit of the state from the European Union. 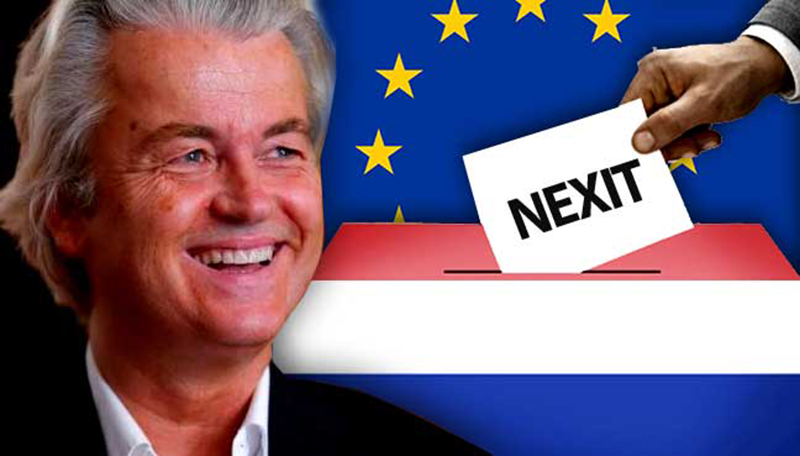 Originally appeared at Izvestia; Appeared in Bulgarian at A-specto, translated by Valentina Tzoneva exclusively for SouthFront

The Freedom Party, which is the third political power in Netherlands, is working on a project for a referendum similar to Brexit. In case the country exits the European Union, the Hague will work on improving relations with Moscow, and will first of all, work on lifting the anti-Russian sanctions. This is what party leader, Geert Wilders, said in an interview with Izvestia newspaper.

“The prosperity of our country depends on our independence and on our ability to make our own decisions. The events of the last months have pointed out that we must, as soon as possible, resolve the question of our membership in the EU through a referendum. Brussels cannot order with whom we may have economic or political relations. The restoration of relations with Russia is a priority for a traditionally trade-oriented country such as Holland. For many centuries, our two countries, regardless of existing conflicts, have benefited from mutual cooperation. The lifting of the anti-Russian sanctions is a necessary condition for our future prosperity,” Wilders said.

The politician explained that the lifting of the anti-Russian sanctions is directly linked to the independence of Holland. According to him, even if the Parliament voted in this direction now, judicially the situation will remain the same (in the EU, the principle of the superior right of the European Union takes precedence over national judicial systems).

“Brussels makes decisions concerning its own interests, without listening to the opinions of the people. This is one expanding monster which is involved in conquering territories and in stealing from our social system, our identity and our democracy. That is why each of our decisions will have legal status only when we are separated from the EU. We will have a stronger economy due to the connections and trade with Russia,” the politician noted.

A number of states in the EU spoke about lifting the anti-Russian sanctions. In April, the lower chamber of the French Parliament voted for the cancellation of the sanctions, and in the beginning of June, a similar resolution was adopted in the Senate. Regardless of the acceptance of these documents, Paris did not recognise them and at the end of July, it supported the extension of the sanctions. Similar resolutions were voted for in the regional parliaments in Italy (Veneto, Liguria and Lombardy) as well as in the Parliament of Cyprus. MPs from Germany, Belgium, Hungary and Greece also did the same. The EU, however, continues on its own external policy course and does not participate in political discussions.

Geert Wilders explained that with its unpopular decisions, Brussels is pushing the countries of the EU towards such actions. He pointed to the political deal with Turkey as an example – the promise for a visa-free regime for Turkish citizens, which is considered as being a threat to the identity of ordinary Europeans.

“Our party has spoken about the necessity of exiting the European Union for a long time, but now after the events in Great Britain, we can rely on Nexit in the short term, before the parliamentary elections (scheduled for March 2017). This speed is related to the protection of our national borders. The biggest threat today is the uncontrolled flow of migrants who, in order to reach the Netherlands, pass through several safe countries. Therefore, the refugees are not looking for safety, but are interested in our social benefits. And together with the migrants, thousands of terrorists are entering and they are the real threat for the European world,” the politician explained.

It is interesting that due to the lack of will to change the course according to the new political situation, many countries in the EU continue the discussion on the future of the Union. Professor Peter Schultze from the Gottingen University explained to Izvestia why the EU must change: “Brexit was the beginning of the process of reconstruction and reform for the EU, because it became obvious that in this form, the project does not respond to the needs of the people.” There are about 50 nations speaking over 200 languages in Europe. This is not a homogenous territory. And Brussels must remember that Europe does not end at the borders of the European Union, but includes Great Britain and Russia, too. It is important for Brussels to review the relations with the countries willing to become members of the EU. First, they must think about a new form of the relationship. They must think about a pan-European perspective. Today, it has become clear that we have so much in common with Russia,” Professor Schultze noted.

NETHERLANDS should leave the EU and NATO. And sign trade deals with Russia and Iran and Lebanon and Syria. And work only with other European countries that leave the EU-empire, and who actually protect the interest of their indigenous tribal peoples.

Here is how the Zionist operation to erase the indigenous European people is being executed.

zionist?? did u not get a lesson from WOII?

i hope as many of the countries that can get out of the eu do so before they are completely taken over by the muslims. strengthen your borders, start thinking for yourselves, start acting in your own best interests…because unifying in spirit as a nation of people is the only measure that will stop the globalists from taking everything you have, and recognizing that the vehicle of delivery for this weapon of mass destruction is the eu is the first step in containment.

The European Union has been highjacked by people who have become mere agents of US interests. As one cannot change this disfunctional EU the only solution is to leave it. And not only the Netherlands.