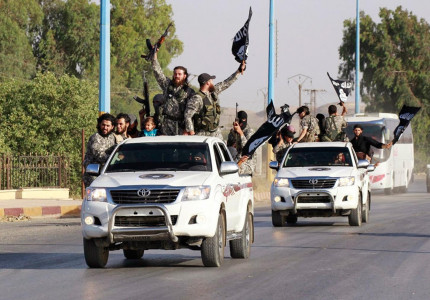 The US Treasury has recently opened an inquiry about the Islamic State’s use of large numbers of brand-new Toyota trucks. The issue has arisen in the wake of growing global suspicion that the US itself has played a key role in arming and funding the terrorist army across Syria and Iraq.

In the ABC’s article U.S. counter-terror officials have asked Toyota to help them determine how ISIS has managed to acquire the large number of Toyota pick-up trucks and SUVs that can be seen in the various propaganda videos of this terrorist organisation. Toyota, however, says it does not know how ISIS obtained the vehicles and it has a “strict policy to not sell vehicles to potential purchasers who may use or modify them for paramilitary or terrorist activities.”

“This is a question we’ve been asking our neighbors. How could these brand new trucks… these four wheel drives, hundreds of them – where are they coming from?” said Lukman Faily, the Iraqi Ambassador to the United States, for the  ABC News.

The mystery of how hundreds of identical, brand-new ISIS-owned Toyota trucks have made it into Syria is solved. Not only has the US and British government admitted this, but their military forces and intelligence agencies are at the borders of Turkey, Jordan, and even Iraq where these fleets of trucks must have surely passed on their way to Syria.

Of course, much of this is not something new. So the question is – why is the US Treasury just now carrying on with this inquiry? Perhaps those in Washington believe that if the US government is the one asking question of how ISIS has managed to create such an impressive mechanized army in the middle of the Syrian desert, no one will suspect they had a role in it.

Of course, the trucks didn’t materialize in Syria out of thin air. They were brought in Syria in great numbers, with the knowledge and/or direct complicity of the US and its regional allies. Asking Toyota where the US State Department’s own trucks came from is another indication of just how lost US foreign policy has become.