“They trained us to overthrow Gaddafi, to overthrow Assad, then they wanted to send us home, not gonna happen NATO. And you want this democracy and to be part of this story, havent you felt it on your skin back in 1999?” 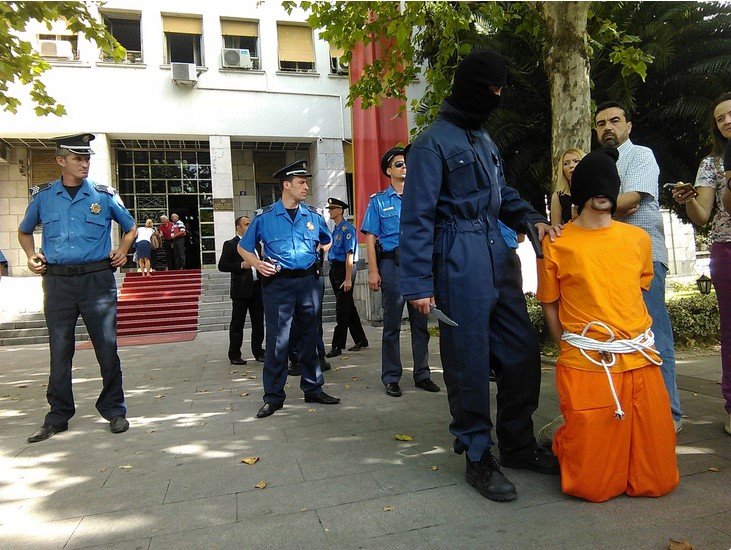 This article originally appeared at Vijesti, translated by Slavko Kovačević exclusively for SouthFront

Montenegrins dont need NATO, a message was sent from the Movement for neutrality of Montenegro, citing that they felt democracy of the Alliance back in 1999.

Movement for neutrality performed today in front of the Parliament, in which they have shown “execution” of the citizen who was tied and blindfolded.

They asked people of Montenegro, how did they jump to the conclusion to get involved in the conflicts on the other part of the planet.

“Where did you get idea to install democracy in our country?” said the partaker of the performance before “executing” the blindfolded citizen.

He said that Montenegrins had no territorial conflict with “them” for years and centuries, they dont border each other and that they cant understand the problems of Montenegro.

“Yet you are still ready to send that few soldiers you have to us. You never led any war of conquest and what are you going to do in the situation where you dont understand the problem?” said the performer.

“They trained us to overthrow Gaddafi, to overthrow Assad, then they wanted to send us home, not gonna happen NATO. And you want this democracy and to be part of this story, havent you felt it on your skin back in 1999?” – it was said as a part of the performance.

They cited that the Montenegrins felt the democracy distributed through NATO bombs in 1999. “Is it time for you to bomb us now?”.

It was also said to the citizens of Montenegro that if they are to get along with NATO and help them in their wrongdoings that they will also have to pay the price, like Croatia did with the unfortunate Salopek (Croatian worker executed in Egypt by ISIS/Croatia is part of NATO)

“This citizen will not be killed by us, politicians will murder him, politicians who are lobbying for the goal you dont want to be part of. So, stay smart Montenegrins, you dont need NATO, mind your own bussinesses.”