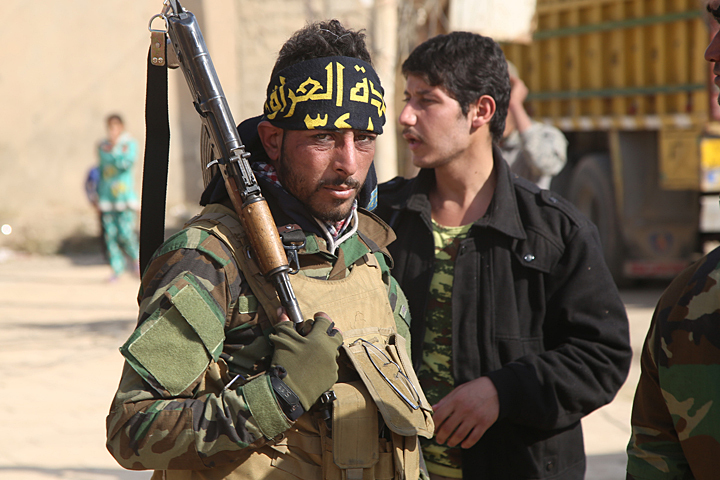 –So you are from Russia?! –I hear the low voice of a guy with a steroid-induced bodybuilder physique and a pistol in his belt. –We are grateful to Putin, the president of Russia, for his help to Iraq, Syria, and Iran! For fighting Daesh with his aircraft! We’re against everyone who supports it, against Turkey, Qatar and Saudi Arabia! Thank you, Putin! We’ll be victorious together!

Remarkably, the closer you are to the front lines, the more people praise Russia and Putin. And the more displeased people are with the Americans which “one day fight ISIS, the next day they don’t”… The assault against Mosul has de-facto stalled in the last few days, and the victorious reports were nothing more than a media-spun myth. Iraqi forces still have not entered Mosul. There is fighting in the tiny outlying towns which are adjacent to the main objective. The humanitarian situation in them is catastrophic. We saw how the inhabitants of an eastern Mosul suburb of Gogzholi ran to get the first batch of humanitarian aid since the operation began. They were left to their own devices since October 17, and were attempting to survive under round-the-clock bombardment without electricity, food, or water. On camera, people thank the military for their liberation. But off camera they tell about how artillery and aircraft massacred entire families.

–Liberation by the Iraqi army and police took our necks out of the noose,–we’re told by an elderly man in another suburb, Khammam-al-Alil, south of Mosul. –No food, no work, couldn’t shave beards, made us wear certain types of clothes, cut heads off on public squres…

Even a day ago, the entrance to Khammam-al-Alil was calm and quiet. Now there is a burned out, ancient Opel right there, surrounded by clumps of earth scattered by the explosion and a distended corpse with awkwardly twisted legs. The corpse is partly covered up with a blanket, but the face is visible. The mustache-less suicide fighter has a short beard tinted bright red. What ordinary people call “ISIS-style.” The terrorist was stopped by accurate gunfire 100m short of a checkpoint. Such “cars with a delivery” don’t surprise anyone in Iraq anymore, and people know how to react. The corpse has been left out in the heat for a reason, even though by custom he was supposed to have been buried yesterday, before the sunset. It’s both punishment and a lesson to future would-be shahids.

Humanitarian aid is being distributed under strict supervision. We barely took out our cameras as the cop who came with us jumped into the crowd, jumped back out and threw two blades onto the floor of our minivan–a knife-bayonet from a Chinese Kalashnikov, and a traditional local blade, double-edged, palm-wide, and curved like a predatory bird’s beak.  He yanked them from behind someone’s belt. “Knives in exchange for food”, one of the KP correspondents joked. Then all of the male aid seekers were told to sit on their heels. So that the street could be clearly observed from one end to the next. Iraqi military are closely observing the situation, and they are not shy to shoot above people’s heads during such missions.

The relationship between the liberators and the liberated is complex and multifaceted. There is both mutual happiness and earnestness which is off the scale. But also suspicion–why didn’t they run? What did they do while under ISIS rule? A soldier complained to us, point-blank, that when Mosul and vicinity are liberated, Iraq will receive one million people who lived under terrorists and weren’t bothered by it. And then the disease will spread into the rest of the country. But at the same time one can’t abandon one’s fellow citizens.

Russia encountered a similar complex moral question in Chechnya. Iraq is yet to face it, and in the meantime it is showering the crowd of refugees with heavy white boxes of canned food, macaroni packets, and rice. As is customary in the Middle East, two lines formed, one male and one female. It is by the women that one can see the level of local umma’s radicalization. There were more women wearing complete niqabs in this town.

We’re moving further north, toward Mosul, along the defensive line that ran along the Tigris. A traditional Arab embankment 2.5 meters high, armored vehicles with a forest of barrels pointing at the opposite bank. We reach the final positions still 10km short of Mosul. They are held by Iraqi federal police. Here, like everywhere else, the offensive has stalled for the last several days. Either they feel no reason to be in a hurry, or the enemy turned out to be more serious than their plans allowed for. The military, naturally, have their own explanation why the assault on Mosul suddenly ground to a halt.
–ISIS is well fortified there, but they are short of weapons, only mortars and suicide vehicles, as far as heavy weapons are concerned,–we’re reassured by Mukhammad Talib Khamid, a federal police lieutenant. –God willing, we’ll soon move on Mosul. Now our forces need reinforcements and rest, we need to bring up munitions, then we’ll resume the offensive and reach the center.

ISIS reminds of itself using a single mortar bomb which explodes in an industrial park across the road from us. The checkpoint comes to life and starts to shower the opposing slope with enthusiastic but pointless automatic rifle fire. Some of the troops are clumsily running after an armored car laying down machine-gun fire, hopeing to empty a few magazines in the direction of the enemy from behind its cover. It would appear that the famous US special training passed this unit by. Because this “attack” appeared comical rather menacing. When the passions calmed down, we saw an entrance into a tunnel into which the militants hid, before moving on to the “dead area” on the other side of the hill.

This swift “operation” that unfolded before our eyes was utterly pointless without a battery of mortars and observers who would have spotted the militants leaving their positions. Naturally, the far slope ought to have been under pre-registered fires, with trained and ready crews and observers ready to open fire at a moment’s notice…But none of that was in evidence here. There are, to be sure, US troops, 600 of them, sitting at their own base that’s closed to everyone else. It seems that the assault on Mosul will in the end fall to them, and they will have to show using their personal example and bravery how it’s done. And some of these Americans, dejectedly smoking cigarettes on the Irbil-Mosul highway shoulder, will lose their lives to atone for the 40 years of their government’s political games with “radical Islam”, be it the Taliban, Al-Qaeda, and now ISIS. Mosul will, naturally, be taken, no matter what losses civilians suffer. But how many other such  test-tube monsters will have to be slain in the next decade?

As has HRC’s bid for presidency. Connect the dots and the square becomes a circle.

Funny how in an article dated the same day Southfront says the ISF have been gaining ground.
Which is it?

Have found over the years following the Syria/Iraq conflicts that various websites
Linked to Iran,Lebanon,Hezbollah,and Syria….skew recent news with confusion
Of information.
You go away thinking the enemy got clobbered….
Turned out to be just a skirmish,
Then only 3 Takfiri killed.

Possibly Syria pushed the SAA victory story to counter reality which was worrying.
Since Russia came in in 2015….The news began to be realistic to theatre event outcomes.

Iraq has been nutsy squirrel world ever since Negroponte set up the murder spree of Shia and Sunni. …bodies dumped each morning with knee caps drilled.

US talks about the battle of Fallujah /Sunni Triangle like it was some great victory.
It was pure chaos and murder…with Takfiri AL qeada tumbling out to become ISIS years
Later.

Empire knows how to grow Opium and Terror. ..
Must be the old British East India Company Book .