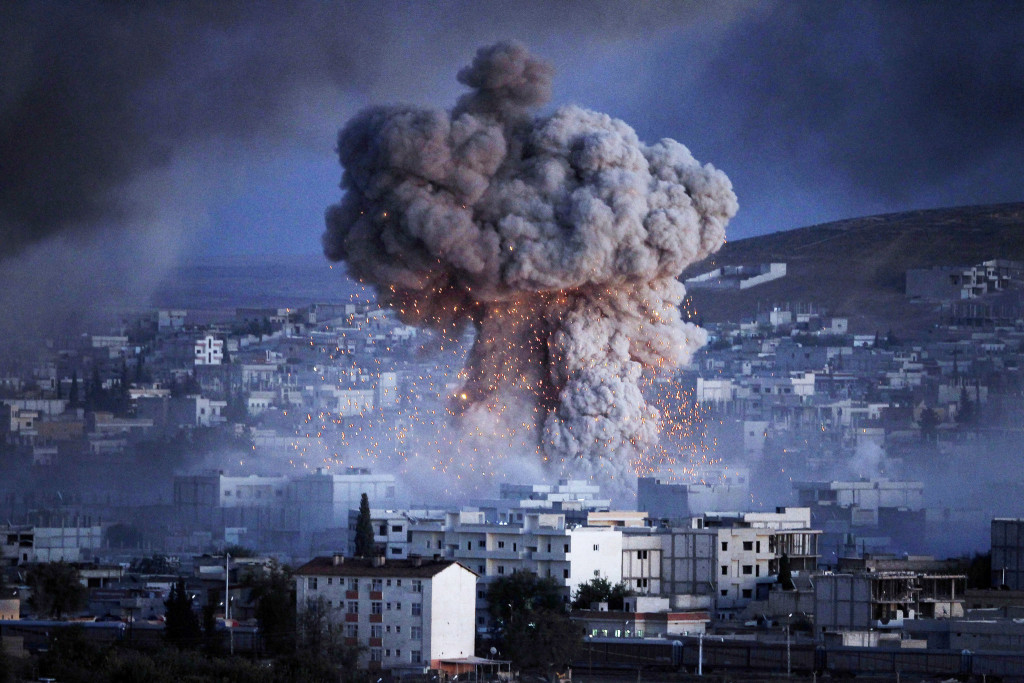 “We must now seriously entertain the possibility that the war in Syria has involved similar, if not greater, levels of manipulation and propaganda than that which occurred in the case of the 2003 Iraq War”.

An incredibly complex and confusing conflict with hundreds of opposition groups and multiple external actors often keen to hide many of their actions, how can journalists and the public get an accurate understanding of what is happening in Syria?

As governments routinely use their public statements to deceive the public, traditionally leaked government documents have been seen as the gold standard of journalistic sources – a unique opportunity to see what those in power are really thinking and doing behind closed doors.

When it comes to Syria there have been a number of US government documents leaked about US policy in the region. However, though these disclosures were reported by the media at the time, they have been quickly forgotten and have not contributed to the dominant narrative that has built up about the conflict.

As Professor Peter Kuznick noted about the American history he highlighted in The Untold History of the United States documentary series he co-wrote with director Oliver Stone, “the truth is that many of our ‘secrets’ have been hidden on the front page of The New York Times.”

For example, liberal journalists and commentators have repeatedly stated the US has, as Paul Mason wrote in the Guardian last year, “stood aloof from the Syrian conflict”. The leaked audio recording of a meeting between President Obama’s second Secretary of State John Kerry, and Syrian opposition figures last year shows the opposite to be true.

Challenged about the level of US support to the insurgency, Kerry turns to his aide and says: “I think we’ve been putting an extraordinary amount of arms in, haven’t we?” The aide agrees, noting “the armed groups in Syria get a lot of support”.

Amazingly, before noting the US had sent an “extraordinary amount of arms” to the rebels, Kerry tells the activists “we can always throw a lot of weapons in but I don’t think they are going to be good for you” because “everyone ups the ante” leading to “you all [getting] destroyed”.

This explanation of the logic of escalation is repeated later in the meeting by Kerry’s aide, who notes “when you pump more weapons into a situation like Syria it doesn’t end well for Syrians because there is always somebody else willing to pump more weapons in for the other side”.

A classified 2012 Defense Intelligence Agency (DIA) report, published by the right-wing watchdog Judicial Watch, provides important context to Kerry’s remarks. In the heavily redacted document the DIA – the intelligence arm of the US Department of Defense – notes “the Salafist, the Muslim Brotherhood, and AQI (al-Qaida in Iraq) are the major forces driving the insurgency in Syria” and “The West, Gulf countries and Turkey support the opposition”.

Speaking at a 2013 Jewish United Fund Advance & Major Gifts Dinner – the transcript of which was published by Wikileaks – former US Secretary of State Hillary Clinton confirmed that US ally Saudi Arabia “and others are shipping large amounts of weapons – and pretty indiscriminately – not at all targeted toward the people that we think would be the more moderate, least likely, to cause problems in the future”.

It gets worse. Discussing the crisis, the DIA report notes “There is the possibility of [the opposition] establishing a declared or undeclared Salafist Principality in Eastern Syria… and this is exactly what the supporting powers to the opposition want, in order to isolate the Syrian regime.”

This appalling revelation was seemingly confirmed by General Michael T Flynn, the Director of the DIA from 2012-14 (and now National Security Advisor to President Trump), in a 2015 interview with Al-Jazeera’s Mehdi Hasan – and also, it seems, by Kerry when he told the Syrian activists:

“The reason Russia came in [to the conflict] is because ISIL [the Islamic State of Iraq and the Levant] was getting stronger. Daesh [another name for ISIL] was threatening the possibility of going to Damascus and so forth… And we know that this was growing. We were watching. We saw that Daesh was growing in strength. And we thought Assad was threatened. We thought, however, we could probably manage – you know, that Assad might then negotiate, but instead of negotiating he got Putin to support him.”

In summary, the leaked information wholly contradicts the popular picture of western benevolent intentions let down by President Obama’s ineffective leadership and inaction.

Instead the evidence shows the US has been sending an “extraordinary amount” of weapons to the armed insurgents in Syria in the full knowledge that Salafists, the Muslim Brotherhood, and al-Qaeda in Iraq were the “major forces” driving the insurgency. They did this understanding that sending in weapons would escalate the fighting and not “end well for Syrians”.

Furthermore, the US has long known that its regional ally Saudi Arabia and other Gulf states have been supporting extremists in Syria. And, most shocking of all if true, both Kerry and the DIA report seem to show the US allowed forerunners to IS to expand and threaten the Syrian government as this corresponded with the US’s geo-strategic objectives.

More broadly, by highlighting how the US welcomed the growth of IS in Syria, the leaks fatally undermine the entire rationale of the “War on Terror” the West has supposedly been fighting since 2001. These are, in short, bombshells that should be front page news, with lengthy investigative follow ups and hundreds of op-eds outraged at the lies and hypocrisy of western governments.

Instead, the disclosures have disappeared down the memory hole, with the huge gap between the importance of the revelations and the lack of coverage indicating a frighteningly efficient propaganda system.

It is worth noting however, that as an observer and newsreader – rather than seasoned expert – there may well be important context or information of which I am unaware, which provides a different take on the leaked material. This would lessen its importance and, therefore, justify the media having largely ignored it.

Of course, the best way of confirming the accuracy and importance of the leaks is for the media to do its job and thoroughly investigate the disclosures, to devote significant resources and manpower to the story, and to ask awkward and searching questions of established power.

I’m not holding my breath.

Ian Sinclair is a freelance writer based in London and the author of The March that Shook Blair: An Oral History of 15 February 2003. He tweets @IanJSinclair

So time has come to judge for oneself WHO are the real terrorists and send them to court as such: Obama, Kerry, Clinton, and their little puddles Hollande, Merkel & co. “Bande de salauds!” “Shame on you bastards!”

Excellent piece, and yes, you are reading the information correctly, especially if you add the NYTimes pieces on how Sec. Clinton was involved with supplying arms via Qatar to the Muslim Brotherhood and other jihadist fighters in Syria. There are no extenuating circumstances that would change the context of the leaks, etc.

Supporting jihadist fighters for the sole purpose of overthrowing Assad has been US policy from 2006 under President Bush through 2016 under President Obama. It has nothing to do with bringing democracy and other US values to Syria, as the Syrian government has no problems with having free-and-fair elections to decide the future of the country (notwithstanding what Sec. Kerry says on the taped recording).

I prefer this piece by W. Engdahl on topic: http://journal-neo.org/2016/11/04/the-real-huma-gate-crime-is-the-muslim-brotherhood/

Interesting piece. There are so many players, all with different agenda’s that I don’t believe anyone of them is in control. I look upon it as finding allies, and there are enough allies who find benefit from removing President Al-Assad that the US had held onto to this concept through think and thin. It’s only the Russians and their military might (along with the Syrian people’s support of Assad and country) that have defeated all of them.

Al-Araby took this article off their website because Ian Sinclair was so obviously talking out of his arse, You can still find it here and at Global Research, your one-stop shop for conspiracy theories.

And why do you say Ian Sinclair “as so obviously talking out of his arse”? He has documented everything he said.

Take the leaked audio recording of Sec. Kerry. The NYTimes first reported it here: https://www.nytimes.com/interactive/2016/09/30/world/middleeast/john-kerry-syria-audio.html?_r=0 but only used snippets of the conversation so it would fit the story they wanted to tell. CNN put the full recording on their website but then took it down per someone’s request the same day. It was then released in full by WikiLeaks. Further, you can only find the full recording on non-US websites, similar to trying to find the audio recording of Assistant Secretary of State Victoria Nuland and the US Ambassador to Ukraine, Geoffrey Pyatt talking about Ukraine.

So that you don’t have to listen to the full recording: http://www.thetruthseeker.co.uk/?p=145224 or on this site: https://southfront.org/leaked-audio-of-us-secretary-of-state-john-kerry-shows-obama-wanted-isis-to-grow/

““I think we’ve been putting an extraordinary amount of arms in, haven’t we?” The aide agrees, noting “the armed groups in Syria get a lot of support”.”

and to me the most damaging part at time 26:10 where Sec. Kerry says

“The reason Russia came in [to the conflict] is because ISIL [the Islamic State of Iraq and the Levant] was getting stronger. Daesh [another name for ISIL] was threatening the possibility of going to Damascus and so forth… And we know that this was growing. We were watching. We saw that Daesh was growing in strength. And we thought Assad was threatened. We thought, however, we could probably manage – you know, that Assad might then negotiate, but instead of negotiating he got Putin to support him.”

Sounds convincing to me. Am I missing something? Not sure why Al-Araby took down the article. Would love to know. If you have any information please share.

‘We must now seriously entertain the possibility that the war in Syria has involved similar, if not greater, levels of manipulation and propaganda than that which occurred in the case of the 2003 Iraq War’. Err, Hillary Clinton’s leaked emails have shown that it was clearly evident it was a Muslim Brotherhood armed uprising that the US backed in 2011, for desired result of regime change, and that Qatar and Saudi Arabia were primary financiers and intermediaries for recruitment, weapons acquisition and wages of domestic and foreign Islamist’s thereafter.