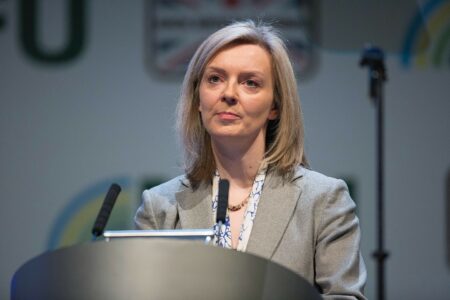 Never underestimate the power of failure.  As the Liz Truss Disaster Show demonstrates, the next pitfall is probably just around the corner.  The UK Prime Minister has shown, along with her distinctly oblivious Chancellor of the Exchequer, how to balls up the economy in the shortest timeframe imaginable.

Chancellor Kwasi Kwarteng’s “mini-Budget” delivered on September 30, designed to evade the eagles at the Office of Budget Responsibility, was greeted with shock from the market boys and girls to the chattering classes.  The Bank of England took it upon itself to exercise some sober restraint in the face of rampant fiscal recklessness.

The ailing British pound received another battering on October 5 after Truss’s speech at the Conservative Party conference.  It had risen relative to the US dollar on October 3 in response to the decision to abandon the policy of removing the top 45p tax rate, only to suffer another precipitous decline.

Her comically abysmal, half-hour speech, delivered to party members increasingly unsettled by her recent performances, was peppered with ideological dross and economic denialism.  Conservatism, she stated, was about “a belief in freedom, in fair play and the great potential of the British people.”  She was “not interested in how many two-for-one offers” a person bought from the supermarket or “how you spend your spare time, or in virtue signalling.”

What did interest her was attacking the “anti-growth coalition”, a mysterious cabal that has it in for the British economy.  They comprised Labor, the Liberal Democrats, and the Scottish Nationalist Party, not to mention the unions, the talking heads, the Brexit deniers, Extinction rebellion and “some of the people we had in the hall earlier.”

This was a coalition on the warpath, spreading its wings, busying itself wanting more taxes and restraining economic gain.  And they would dare express such views in the BBC offices.  To combat such forces, she offered an unconvincing, managerially massaged formula: growth, growth and growth.  Explaining the decision to reverse the scrapping of the 45p rate of income tax as something of a distraction, Truss insisted that low taxes was the way to go.  Stamp duty, the basic rate of income tax, and the corporate tax rate would be cut, while the rise in national insurance would be reversed.

In trying to sound chummier with voters, she went for the personal touch. “I have fought to get where I am today.”  She had “juggled” her career while raising her two daughters.  She had “seen people left with no hope turning to drugs” and “families struggling to put food on the table.”  Interestingly enough, the period during which these things took place was one marked by divisive, ruinous Tory rule.

A peculiar touch came with recalling what seemed to be a particularly scarring incident.  Poor Liz recalled “as a young girl being presented on a plane with a ‘Junior Air Hostess’ badge.  Meanwhile, my brothers were given ‘Junior Pilot’ badges.  It wasn’t the only time in my life that I have been treated differently for being female or for not fitting in.”  Never fear, it made the psychologically wounded aspirant “determined”.

The awfulness of the dull display would have been more complete had it not been interrupted by two young boisterous women from Greenpeace holding the yellow sign sporting the words “Who Voted For This?”  This galvanised the conference attendees, who managed to turn on the protestors with envigored venom.

In the end, the words from Truss hardly mattered, their inconsequential sprinkles vanishing down the drainpipe of vacant rhetoric.  There was no plan for generating actual economic growth.  There was nothing to address the one fundamental problem the UK faces: that it invests too little.

For Iain Martin, writing in The Times, it would have made little difference even if the speech had been the movingly equivalent version of the Gettysburg Address, or something like the Sermon on the Mount.  “[I]t would not have shifted the underlying reality.”  That reality entailed one unmissable fact: the new Conservative leader is simply not liked.

Senior market analyst at Hargreaves Lansdown, Susannah Streeter, humourlessly observed that Truss’s mention of one word three times did little to sway things.  “She may have hoped that her triple promise of growth would have calmed markets further but with nothing new to offer on the table, her words have not had the desired effect so far.”

The Truss Disaster Show has even left a number of conservatives worried, even panicked.   According to Paul Goodman, editor of Conservative Home, she has been left with no good options.  Sticking to her mini-Budget measures would guarantee defeat in the Commons, thereby eroding her authority.  Abandoning them would have much the same effect.

The Spectator has also been running a number of querying meditations and the decline and fall of the new PM.  “There’s something not entirely grown up about the Prime Minister,” Lloyd Evans suggests. “She has a permanent air of naïve euphoria – like a bouncy new teacher taking the class on a jolly exciting trip.”

Barely into her prime ministership, Truss has laid the basis for its demise.  When she and her party return to Westminster, the sense of vultures circling will be palpable.  While recent years tell us that polls are nonsensical excursions of fancy, rarely to be trusted, it is hard to sense that the current figures are off.  Should they remain at their current levels, a massacre at the ballot box is in the making.

GOOD. SOONER ENGLAND DIES THE BETTER. THEN OFF WITH THE EU AND USA

They could lost Scotland, but won’t die, there were many more dangerous situations in history of England. Sleazy Lizzy will be a punching bag, a lightning rod, a scapegoat when economy collapsed. All the existing mistakes made over the decades will be attributed to her.

Another fake freemason leader won’t change anything. ” I am a huge zionist” This empty headed wench traitor gushed at her first opportunity. Translation: I put jews first. When you are a “subject ” you have no rights because you are under Talmudic ( Admiralty ) Law and are considered livestock. We need to restore the Common Law and ban odious usury. The entire english speaking world is neither Christian nor democratic. It is zionist and masonic. It is not “democracy” the commoners should seek but rather freedom. Economic, social, religious, and jurisdictional. Time to end tyranny and let freedom reign.

No one can get rich without usury. Either you take usury, or you collect your pence from your uncle when he comes home from the coal mine…………………….LOL.

If I were you, I’d start driving on the right side of the road. If enough people do that, the last vestiges of empire living in limey heads will collapse like a pricked balloon.

They “invested” in lockdowns, mARN and other dubious “vaccines” and in Ukronazis… Who needs engineering, ecology or productivity of necessary goods when you can support a bloody war în Ukropistan?! Invest in ZeleNsky…

The pound was forecast to fall against the dollar at the start of the year plus it’s been on a long term downtrend since about 1950, so no surprises there, the news just provided a suitable excuse for the predicted movement. Small poor countries see their currency devalued the fastest to ensure they stay poor and the rich end up with their money instead. The Euro, GBP and USD currently seem headed for parity – coincidence or design?

A cheaper pound would under normal circumstances boost the economy by boosting exports but since the UK has nothing other than mayhem and destruction to export, it’ll do them no good. Even worse, much of their stocks of mayhem and destruction are being retained for domestic consumption and increasing their trade imbalance even more than anticipated.

In short and in deference to their simply adorable monarchy, the UK is royally screwed.

This old Anglo-Saxon whore should be raped with a rusty knife, then her throat slit.

No, she should see no cock until she slits her own throat out of despair.

She’s so nasty, a sex-starved Congolese wouldn’t even approach that stinkin’ snatch!!!

They somehow managed to find ever worse imbecile than Boris…. David Cameron The Pigfucker, Theresa May female Mr Bean, Crazy Boris and now this bitch…

plus
Reply to  BoJo The Clown

Антон
Reply to  BoJo The Clown

You mentioned Boris twice, he is your favorite clown. Boris the Drunk looks like political giant compared with the clown of London. But wait for Annalena, i bet on her, she will compete with Lizzy after Adolf Scholz.

Isn’t that being redundant?

I like my Zenn, er I mean Venn diagrams, you know – where the little circles overlap each other. They remind me of Hunter’s paintings. I used to color them in myself, when I was prosecuting black folks for holding a joint or waiting by the phone for someone important to call me.

Liz the Sleaze or Sleazy Lizzy, like Dirty Harry (Kasparov). Great successor of two clowns: Boris and Teresa. I can’t believe how low and stupid western leaders are. Looks like Annalena will be the next Chancellor, this is alles kaput.

Any article on Truss that does not mention she is a graduate of the World Economic Forum globalist seminars is not worth reading. Much of all gov’t’s are full of these people on all “sides,” liberal or conservative, etc.

The UK started with the unelected Chucky the clown, Boris Johnson for the whole of game of medical genocide ‘Covid show’, and now we have the unelected bride of Chucky sitting in as the chief puppet for the Rothschild baby killers…to promote the European suicide mission in Ukraine. Statistically speaking, for every globalist banker pawn you can kill, you will save the lives of at least 50k real human beings… That’s how dangerous bankers are. Only about 43k lives saved for taking out medical directors, and only about 26k if you take out 3-5 5G weaponized cell towers.

The few left in the Tory part membership were only given the choice of TWO candidates. Let the Membership select the candidates next time.