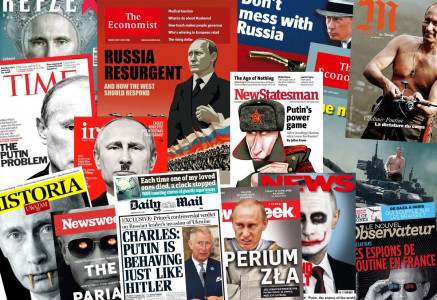 First here, are a group of lies that all are false, all for the very same reason — that they all blatantly contradict the actual (as is to be documented here) history (just click onto each given lying phrase below, to see instances in which the given false phrase has been reported as being instead true — and, then, I shall here document them all to be not just false but the reverse of truth, the exact opposite of the reality):

Any alleged report that employs any such phrase is propaganda — lying ‘news’ or ‘history’ — that bases itself upon the false unstated assumption that Russia’s invasion of Ukraine on 24 February 2022 started the war in Ukraine, instead of responded to a war in Ukraine that U.S. President Barack Obama’s Administration (including Joe Biden) — the American Government — had actually started there, in 2014, against Ukraine’s adjoining nation of Russia. America is planning ultimately to invade Russia from the only nation that is only 300 miles away from Moscow (Russia’s central command — far closer than Cuba was to Washington DC during the 1962 Cuban Missile Crisis).

Here, as proven in the links, are the historical facts, documenting the U.S. Government’s increasing aggression against Russia — using Ukraine as its primary springboard in its plan to conquer Russia:

The Obama Administration perpetrated in February 2014 a bloody Ukrainian coup (hidden behind popular anti-corruption Ukrainian demonstrations that the CIA and State Department had trained and organized local racist-fascist anti-Russian Ukrainians to lead) overthrowing the democratically elected President of Ukraine and replacing him by a racist-fascist (ideologically nazi) regime that immediately replaced Ukraine’s generals with ones to ethnically cleanse pro-Russian Ukrainians and kill some and terrorize the others to flee into Russia so as to get rid of the people in the Ukrainian regions that had voted 70% or more for that democratically elected President — and this ethnic cleansing would enable the nazi U.S.-installed regime in Ukraine to be ‘democratically elected’, and so to continue the U.S.-Government’s control over that country, on Russia’s border.

For the full details, see this.

The war in Ukraine started with Obama’s coup, not with Putin’s ultimate response to it (which occurred soon after America’s rejection on 7 January 2022, of Russia’s demand, NOT to allow Ukraine into NATO).

America’s plan here is to place its missiles on Ukraine’s border with Russia, only a five-minute-missile-flight away from blitz-nuking The Kremlin and thereby beheading Russia’s central command — too fast for Russia to be able to launch its retaliatory missiles.

What is the power of lies?

In a U.N. General Assembly vote on November 14th, the U.N. General Assembly (which has no power) voted by 94 votes for, 73 abstentions, and only 14 votes against, a Resolution to demand that Russia pay restitution to Ukraine, for the war in Ukraine — that America started against Russia by its 2014 coup.

even my small town weekly owned by one…

Per Dorup
Reply to  Amazing Frank

No, That is not relevant in this context. What it is about is supporting og fighting the no-nazis in Kiev.

Aunt Polly
Reply to  Per Dorup

Oh – you’re trying to put the con in context? How juicy of you.

Are you saying SF is a purveyor of lies? Any examples?

One of the reasons the Kremlin retreated from Kherson without a fight is because they know they are going to have to pay restitution for all the senseless damage they caused in their misguided effort to do what Putin understood to be some vaguely termed SVO demilitarization and denazification of Ukraine.

kanye said it better, its the jewish media

Unless you identify the JEW, you are either an idiot or puppet of the JEW. Putin is just another puppet of the Jew like Zelensky. Until stupid Slavs rise up and KILL the Jew, Putin and Zelensky they will be slavic pussy slaves of the jew.

The Masters of the Universe were Exceptional, the only nation the world could not live without… even conquered Germany and Japan and China last century and put their minions to rule in Germany and Japan (China was liberated thanks to MAO), then they created Israel as an advanced outpost to conquer and slave the Muslim World… the Masters of the Universe are so awesome they think all Mankind belong to them, that they created all the World just the last thursday (world created last thursday theory) and they are so close to achieve full world slavery over this planet earth or should I call it Prison Planet that belongs to the Exceptionals. And only the countries they do not own or controlled by the Masters of the Universe are the Evil of this World and must be conquered by them the Good ones and the Exceptional ones.

WELL!! The idiot taxpayers MUST like it they pay for all this nonsense and JEW bullshit ,wars and murders!!

The kosher banksters run this fake war. The give the orders, but secretly the Russians and the jewS are allied. The purpose is to turn it into a world war against the real enemy. Ask the UN who the real enemy is.