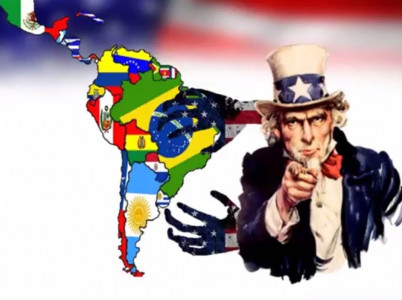 Latin America and the Caribbean are part of the geopolitical and geo-economic confrontation that dominates the international scenario in these moments, that can be qualified as “critic” considering the latest events characterized by terrorist attacks, humanitarian tragedies, the advance of conservative forces, the emergent new democratic forces, a generalized political system, destabilization, military invasions, chaos and wars.

The US government maintains its strategic line of re-conquering its role of a unique power, economically, militarily, culturally and of course politically. The military confrontation in the Middle East is one of their axes of action, taking advantage of inner conflicts of the warring and nearby countries in the zone, which is absolutely strategic, since the biggest amounts of oil that feeds the industry, the commerce and the telecommunications in the world are extracted from there.

The other axis is destabilization and political defeat of popular governments in Latin America. If both objectives, planned by the imperialism, are accomplished, the unipolar hegemony led by the US will be restored, but history does not end there thus it’s not its final stage.

For centuries, the presentation card of the US elites was to show themselves as the perfect democracy, the perfect political system, the example to follow, the measure pattern of all political regimes. Nevertheless, that triumphalist vision, indisputable, unbeatable, has been vanishing, mainly when it was disclosed that the applauded north American democracy was nothing but a plutocracy, the absolute opposite of a government of the people, by the people and for the people, according to the widely-known Lincoln’s formula.

People have become aware that the US despoiled relationship with other countries in the world is contrary to any democratic principle, also, with the economic crack of 2008 and so on, it has been revealed that social inequities deepen in the temple of capitalism. The US, a country of migrants, is building walls today to prevent the entrance of people who want to live the “American dream”. Is the US political and socio-economic system heading to its historic limit?

The criticism to the North American plutocratic political system is not new at all. The only new and defiant aspect has its origin in the impact that Latin American radical democracies provoke in the world, as a political action and as a theoretical reflection as well; the constitutive assemblies and the political changes impose processes that inaugurate a new State/citizen relationship, popular participation, the attention to plurality and the rescue of a fundamental principle: POPULAR SOVEREIGNTY. The subordinate classes are starting to play a protagonist role, and that fact terrifies the elites.

The answer of the imperial policy think-tanks showed up right after. The powerful framework of the media dictatorship expresses in its master lines that Latin American popular processes are “populist”, “authoritarian”, “dictatorial”, and further they use a much more dangerous argument: origin is not the only important thing of a democracy, but also development, this means that it’s not enough to govern with the majority of the electorate, but that government which doesn’t follow Washington’s rules is anti-democratic, “violator of human rights and freedom of speech” and…even “suspicious” of having links with terrorists. A whole political construction that aims to undermine democracies and prepare the public opinion to run seditious plans to legitimate coups, which are, definitively, their favorite method, which can be noted taking a look to the recent history of the region.

Every day, the spokespersons of the Department of State and of the Congress of the US, show their concern due to the situation of democracy in countries with popular governments, they re-join the oligarchic and neoliberal right-wing, they fund NGOs which are not other thing but facade structures for their destabilization plans and, obviously, they use their whole economic strength, at the service of their anti-popular strategy which by the way takes advantage of all kinds of struggle, street violence, parliamentarian coup, coup d’ Etat, and the electoral way, besides the biggest North American political aberrations, namely: “risk country” qualifications with which they push and financially block nations whose governments dare to raise the flags of social redemption and independence.

Far before the disappearance of the Soviet Union, part of the Latin American left-wing debated about democracy as a revolutionary principle from a specific reality: the opposition to dictatorships is the common basis of the popular struggle, from Río Grande to the South Pole. When the left-wing assumed the flag of democracy, it became a massive social force.

The democratic fundaments of the left-wing have their origin in a practical action and a theoretical reflection which, once it becomes a government, it tries to run with more-less success, the integral democratization of the society and the State, but all that takes place in between the battle.

Inside some countries there is a contradictory situation, popular governments walk towards the eradication of social inequities, fighting poverty and exclusion, but at the same time they are in a defensive position, they can´t perceive the new demands of society and, as the criticism is nefarious from some stances, a sort of conservatism is dangerously expanding in the dominions of the left-wing.

The historic experience notes that the effervescence in the struggle of people doesn’t last indefinitely in time, once the objectives are fulfilled or not, the movement goes through a recoil phase, the combats in the barricades are now replaced by other forms of participation. In those moments, for popular governments, the capacity of response to material needs of people becomes the axis of policies.

It’s a matter of priority, for the left-wing in power, to have a correct economic policy in a moment of cheap raw materials in the international market. That’s the critical point of the current political matter.

It’s relevant to note some facts: the left-wing didn’t manage to advance in the elections in Mexico in 2012, amidst the commotion of the physical absence of Commander Chávez, chavism wins but its votes decrease in 2013,; the right-wing applies an ingenious plan in Brazil in the presidential elections where Dilma wins, although the left-wing is moved to a defensive position, the last Salvadorian elections mean a triumph for FMLN but with a small margin, on the other hand the victory of Frente Amplio (Wide Front) in Uruguay is significant, By the end of 2015 the right-wing defeats the Peronism candidate and in the parliamentarian elections in Venezuela it happened the same way  where Bolivarian forces lost the majority in the National Assembly.

The abrupt turns in regional politics also reach Bolivia where the revolutionary government lost the referendum in which it was going to be decided if Evo Morales and Álvaro García Linera could postulate once again in the next elections. Another case is the one registered in Ecuador where, after a spectacular victory in the parliamentarian elections, Alianza País lost in the main cities the elections of local governments.

A new popular political articulation is not seen in the nations where the right-wing rules. Some analysts believe that the lack of unity of the left-wing doesn’t contribute to its advance, and that’s true, but such argument is insufficient, the shortcomings are linked to an inappropriate reading of reality, to the inexistence of an integrating national-popular project; basis over which an actual unity and a political power plan can be built.

The central problem of every revolution is the problem of the power of the State, without a clear certainty on this issue it would be impossible to lead the revolution and delineate a perspective of structural changes to the neoliberal capitalist system.

The left-wing in the middle of the storm is obligated to a deep reflection in regards to the current political scenario, to identify the mistakes made in the economic field to quickly correct them, to hold and expand the social block that made all the changes possible and to emphasize in the humblest, the very core of the revolution.

Also to renew the speech, to eradicate conservatism, to denounce the right-wing and its neoliberal practices, to propose programs that respond to aspirations, needs and feelings of the people.

The pamphlet speech is worthless, prepotent and arrogant attitudes are repudiated by the people, bureaucracy and corruption shall be fought always, because a left-wing that doesn’t know how to combine politics and ethics, in a daily basis, turns into right-wing. The best policies are the policies of principles.

Political obstacles require a big will to be defeated, but not an empty voluntarism. For that reason, revolutionary parties and popular movements must retake their role of articulating social struggles, public policies, their role in the battle of ideas. It’s inconceivable that in the lights of historic experience, the left-wing doesn’t face difficulties, because in contradictions life can be found and big ideas and history-changing movements emerge.

Tags:economy, Latin America, politics, the us