Every time you think the corporatocracy’s manufactured anti-Semitism hysteria cannot possibly get more absurd, they somehow manage to outdo themselves. OK, stay with me now, because this is a weird one.

Apparently, American Hitler and his cronies are conspiring with some secret group of “Jewish leaders” to stop British Hitler from becoming prime minister and wiping out all the Jews in Great Britain. Weird, right? But that’s not the weird part, because maybe American Hitler wants to wipe out all the Jews in Great Britain himself, rather than leaving it to British Hitler … Hitlers being notoriously jealous regarding their genocidal accomplishments. 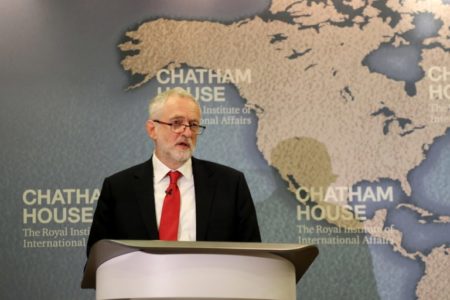 No, the weird part is that everyone knows that American Hitler does not make a move without the approval of Russian Hitler, who is also obsessed with wiping out the Jews, and with destroying the fabric of Western democracy. So why would Russian Hitler want to let American Hitler and his goons thwart the ascendancy of British Hitler, who, in addition to wanting to wipe out all the Jews, also wants to destroy democracy by fascistically refunding the NHS, renationalizing the rail system, and so on?

It doesn’t make a whole lot of sense, does it? In any event, here’s the official story.

In “a recording leaked to The Washington Post,” and then flogged by the rest of the corporate media, Reichsminister des Auswärtigen, Mike Pompeo, told a group of unnamed “Jewish leaders” that American Hitler (i.e., Donald Trump) will “push back” (i.e., intervene) against British Hitler (i.e., Jeremy Corbyn) to protect the lives of Jews in Great Britain if British Hitler becomes prime minister (and is possibly already doing so now). The identities of these “Jewish leaders” have not been disclosed by the corporate media, presumably in order to protect them from being murdered by Corbyn’s Nazi hit squad. Whoever they were, they wanted to know whether American Hitler and his fascist cabinet were “willing to work with [them] to take on actions if life becomes very difficult for Jews” after Jeremy Corbyn seizes power, declares himself Führer of Communist Britannia, and orders the immediate invasion of France.

To anyone who has been closely following the corporate media’s relentless coverage of Jeremy Corbyn’s Nazi Death Cult (i.e., the UK Labour Party) and the global Anti-Semitism Pandemic, it comes as no real surprise that this group of “Jewish leaders” (whoever they are) would want to stop him from becoming prime minister. I doubt that their motives have much to do with fighting anti-Semitism, or anything else specifically “Jewish,” but … well, I’m kind of old-fashioned that way. I still believe there’s a fundamental difference between “the Jews” and the global capitalist ruling classes.

I realize that both the neoliberal establishment and the neo-fascist fringe disagree with me, and that both are determined (for different reasons) to conflate the two in the public’s mind, but that’s my take, and I’m sticking to it. I don’t think the world is controlled by “the Jews.” I think it’s controlled by global capitalism.

Go ahead, call me a conspiracy theorist. Here’s how the anti-Semitism panic in the United Kingdom looks to me.

After nearly 40 years of privatization and restructuring, British society is on the brink of being permanently transformed into the type of savage, neo-feudal, corporatist nightmare that the USA already is. The global capitalist ruling classes are extremely pleased about this state of affairs. They would now like to finish up privatizing Britain, so they can get on with privatizing the rest of Europe. The last thing they need at this critical juncture is Jeremy Corbyn to become prime minister and start attempting to remake their nascent neoliberal marketplace into a society … you know, where healthcare is guaranteed to all, you don’t need a mortgage to buy a train ticket, and people don’t have to eat out of trash bins.

Unlike in the USA, where there is no functional political Left, and where the non-parliamentary “two-party system” is almost totally controlled by the corporatocracy, in the UK, there are still a few old-fashioned socialists, and they have taken back the Labour Party from the neoliberal Blairite stooges that had been managing the transformation of Britain into the aforementioned neo-feudal nightmare. Jeremy Corbyn is the leader of these socialists. So the corporatocracy needs to destroy him, take back control of the Labour Party, and turn it back into a fake left party, like the Democratic Party in the USA, so they can concentrate on crushing the right-wing populists. Thus, they need to Hitlerize Corbyn, so they can fold him into their official narrative, Democracy vs. The Putin-Nazis.

And, see, this is what makes the corporatocracy’s War on Populism so seemingly psychotic … at least to anyone paying attention.

In the USA, the populist insurgency is primarily a right-wing phenomenon (because, again, there is no Left to speak of). Thus, the neoliberal ruling classes are focused on Hitlerizing Donald Trump, and stigmatizing the millions of Americans who voted for him as a bunch of Nazis. Hitlerizing Trump has been ridiculously easy (he almost Hitlerizes himself), but the ultimate goal is to delegitimize the populist sentiment that put him into office. That sentiment is primarily neo-nationalist. So it’s a one-front counter-insurgency op (i.e., neoliberalism versus neo-nationalism).

In the UK, things are not that simple. There, the neoliberal ruling classes are waging a counter-insurgency op against populist forces on two major fronts: (1) the Brexiters (i.e., nationalism); and (2) the Corbynists (i.e., socialism). They’re getting hit from both the left and right, which is screwing up the official narrative (according to which the “enemies of democracy” are supposed to be right-wing neo-nationalists). So, as contradictory and absurd as it sounds, they needed to conflate both left and right populism into one big scary Hitlerian enemy. Thus, they needed to Hitlerize Corbyn. Presto … Labour Anti-Semitism crisis!

Now, anyone who is isn’t a gibbering idiot knows that Jeremy Corbyn is not an anti-Semite and the Labour Party is not a hive of Nazis. It’s a testament to the power of the corporate media that such a statement even needs to be made … but, of course, that’s the point of the smear campaign the neoliberal corporate media have been waging for the last three years.

Smear campaigns are simple and effective. The goal is to force your target and his allies into proclaiming things like, “I am not an anti-Semite,” or “I’ve never had sex with underage boys,” or whatever smear you want to force them to deny. You don’t have to prove your target guilty. You’re just trying to conjure up a “reality” in which every time someone thinks of your target they associate him with the content of your smears.

The corporate media have done just that, to Jeremy Corbyn, to Donald Trump, to Putin, and to assorted lesser figures. They did it to Sanders in 2016. They are doing it now to Tulsi Gabbard. The goal is not only to smear these targets, but also, and more so, to conjure a “world” that reifies the narrative of their smears … a binary “good versus evil” world, a world in which whatever they want to accuse their targets of being linked to (e.g., terrorism, fascism, racism, or whatever) is the official enemy of all that is good.

Since the Brexit referendum and the election of Trump, the ruling classes have conjured up a world where “democracy” is perpetually under attack by a global conspiracy of “Russians” and “Nazis” (just as they previously conjured up a world where it was perpetually under attack by “terrorists”). They have conjured up a post-Orwellian reality in which “democracy” (i.e., global capitalism) is the only alternative to “neo-fascism” (i.e., anything opposed to global capitalism).

And this is why Corbyn had to be Hitlerized, and why Putin, Trump, Assad, Gabbard, Assange, the “Yellow Vest” protesters in France, and anyone else opposing global neoliberalism has to be Hitlerized. Socialism, nationalism … it makes no difference, not to the global capitalist ruling classes. There are always only two sides in these “worlds” that the ruling classes conjure up for us, and there can be only one official enemy. The official enemy of the moment is “fascism.” Therefore, all the “bad guys” are Hitler, or Nazis, or racists, or anti-Semites, or some other variation of Hitler.

The fact that this “reality” they have conjured up for us is completely psychotic makes it no less real. And it is only going to get more insane until the corporatocracy restores “normality.” So, go ahead, if you consider yourself “normal,” and try to force your mind to believe that Jews are no longer safe in Great Britain, or in Germany, or France, or the USA, and that Donald Trump is a Russian asset, and is also literally Adolf Hitler, and an anti-Semitic white supremacist who is conspiring with Israel and Saudi Arabia in their campaign to destroy Iran and Syria, which are allies of his Russian masters, as is Venezuela, which he is also menacing, and that Jeremy Corbyn’s secret plan is to turn the UK into Nazi Germany, with the support of Trump, who is trying to destroy him, and that the Yellow Vests are Russian-backed fascists, and that Julian Assange is a rapist spy who conspired with Russia to get Trump elected, which is why Trump wants to prosecute him, just as soon as he finishes wiping out the Jews, or protecting them from Jeremy Corbyn, or from Iran, or brainwashing Black Americans into reelecting him in 2020 with a handful of Russian Facebook ads.

Go ahead, try to reconcile all that … or whatever, don’t. Just take whatever medication you happen to be on, crank up CNN, MSNBC, or any other corporate media channel, and report me to the Internet Police for posting dangerous “extremist” content. You know, in your heart, I probably deserve it.

LINKBOOKMARKC. J. Hopkins is an award-winning American playwright, novelist and political satirist based in Berlin. His plays are published by Bloomsbury Publishing (UK) and Broadway Play Publishing (USA). His debut novel, ZONE 23, is published by Snoggsworthy, Swaine & Cormorant Paperbacks. He can be reached at cjhopkins.com or consentfactory.org.

Corbyn is a courageous and good man who has exposeded the Zionist and Jew manipulation of western societies, politics and media. The whole Jew fake narrative is being exposed and the hooked nosed vermin are up in arms and as usual labeling him with tags of their Nazi mentors AshkeNAZI is 100% more evil than its Nazi role models..

Corbyn most likely fucks or has fucked a kid. He is being blackmailed. All top politicians are under control of the Banking cartel

“The corporate media have done just that, to Jeremy Corbyn, to Donald Trump, to Putin, and to assorted lesser figures.”