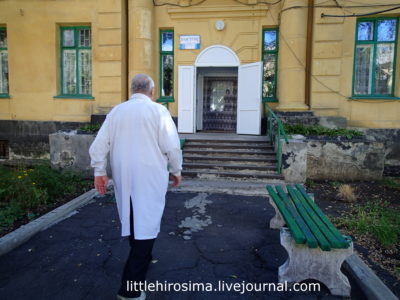 I want to tell you about one individual.
The report ought to be not about him, but rather about a place where people are dying.
But it turned out the story is really about him.
Because the world is full of such simple people. Simple and needed.
We phoned the Gorlovka hospice already from Moscow:–Nikolay Nikolayevich, we heard your hospice is in a bad state, we’d like to bring aid.
–Many, many thanks. We’ll happy to get anything at all.
–Give us a list of what’s necessary. Write as much as you can. We’ll try to do our best.
–I understand that we’ll get whatever is left over, I’ll make a list right now.
–Nikolay Nikolayevich, we’re coming specially for you, and we’ll make purchases specifically for the hospice.
Nikolay Nikolayevich was speechless.
We didn’t understand why at the time. There was still much we didn’t know at the time.
The trip to Gorlovka frightened everyone. But for some reason I was the exception. I owed this hospice already from earlier trips. The hospice and Nikolay Nikolayevich didn’t know that.  We never called anyone, but I remembered him since we were told they are in a really bad shape and that they are not receiving much of anything–they are the lowest priority. Nobody needs the dying. Nobody. Even their own kids.
We wanted to bring aid but the city was being mercilessly shelled.
But already then I decided–we will help. We’ll get through.
I was certain there wouldn’t be shelling. Both Zhenyas were looking at me with concern.

The trip from LPR to DPR was smooth enough.
Me having aid requests from the hospice and wearing short shorts made sure of it. We started to unload bottles, diapers, pails, supplies.
Only women were scrambling around. They summoned a physician from a neighboring department to help.
Nikolay Nikolayevich, the director, simply and earnestly walked up:
–We’ve been waiting. Everyone has been on pins and needles.
Nikolay Nikolayevich is round-faced, reminds me of Leonov, and wears a white smock. He invited me to his cabinet. I overheard one of the medical orderlies:
–Why are you carrying everything? We’ll still have to give it back.
I didn’t understand what she was talking about.
I ran up to the director and grabbed him.
–Nikolay Nikolayevich, show me the hospice.
–Of course. But nearly everyone there is bedridden, what more need I say? Ready?
–Let’s go.
–How many ill do you have?
–22, of them 18 bedridden.
We walk up to a room.
–That’s Anatoliy Babay. From Debaltsevo. His house was pounded to rubble. Soldiers got him out of his cellar, he was wounded, spent time in surgery. Then he was sent here. That’s how it was during the winter. I can’t even express it. Our facility is right along the road to Debaltsevo. Whole crowds came our way. This is where everyone was resettled. The whole floor was full. People slept everywhere. When there was no electricity we all cooked outside on open fires–the workers, neighbors, everyone who was temporarily housed here. The administrative office became a kindergarten, all the employees’ kids were here. We couldn’t deal with anything. I walked behind him and simply listened.
–In other words, we had something like 200 people in my department.
–But there’s no room here. Where?
–People slept right on top of one another. We slept here too.
Nikolay Nikolayevich smiles. A real physician, a genuine sense of humor. Black humor. He’s constantly trying to joke, to distract us. He’d often say “just between us girls”, even though my healthy Zhenyas left a rather different impression.
–Somehow we slept at night. I slept in my cabinet, the senior nurse slept in the nurses’ room. And then suddenly, in the middle of the night, and I’m thinking it’s all over. A direct hit. I fall off the couch and crawl toward the door. I open the door and I see the nurse crawling out of the nurses’ room toward me. We met head to head in the hallway, both of us on all fours. And we hear a voice down the corridor–”oops, sorry folks, I dropped it.” An orderly dropped a bottle with frozen water. The whole department had a big laugh. But at the time I thought it was all over, the scumbags blasted us to bits.
We walk up to the next room.
–This woman was evacuated from Uglegorsk. No documents at all. –When the water was turned off, we carried everything from the cellar–it was flooded, and we used that water to wash the ill. We boiled it, then used for washing. Many thanks to the neighbors who came, brought their detergent and helped us do laundry. Otherwise we’d have drowned in excrement.
–The basement was flooded? So what do you do when there’s shelling?
–Nothing. What are we to do? We cover the ill with mattresses, to protect them from fragments. We ourselves lay down on the floor, under mattresses. We didn’t suffer direct hits. Only right next to us. One window was blown out. We still can’t get the higher-ups to install a new one. At least they gave us plywood, and we covered it up using masking tape. How’s it going to be in winter?
He dismissively waves his hand: “Who needs the dying?” All the windows in the hospital are taped shut. Like everywhere else on the Donbass.
A marker of time and place. And this is Lidiya Duvanskaya. Paralysed, terminal stage of cancer. Understands everything. She was a distinguished teacher. She got cancer only recently. Her colleagues sometimes visit her. But her daughter dropped her off and hasn’t visited once since: “Call me when she dies.”
I’m trying to muster outrage.
–But that’s her mother! 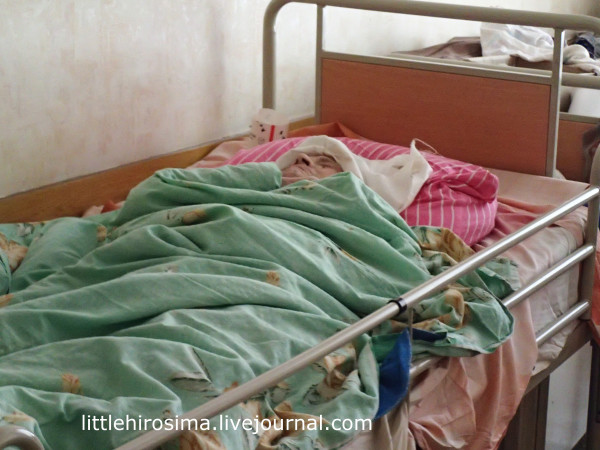 The psychologist who stood right next to us only smiled.
–The majority of people in the hospice are in the same situation. The kids dropped them off and disappeared. See that woman under the pink blanket? That’s Gurzhiy. She had two heart attacks. Her son signed her apartment over to himself, sold it, and vanished, leaving his mother here. 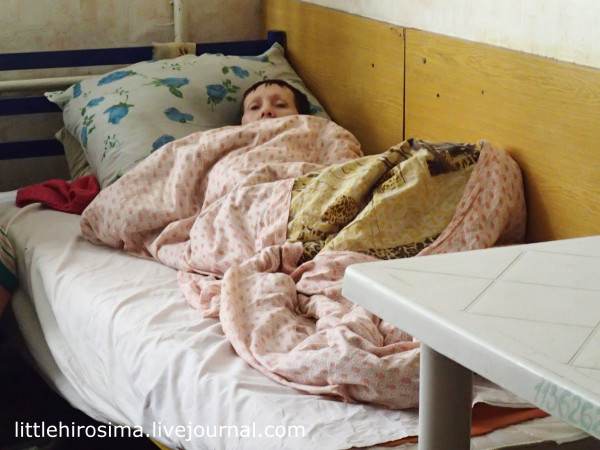 –You see the granny on the green pillow? That’s Kurnosova. She’s hard of hearing after the heart attack. Bedridden. But fully conscious. Her son brought her “for a week” to recover, and split.
I already wrote about the bedridden elderly many times. And I got responses to the effect “that’s how they raised them” more than once. But that’s not right. Because sometimes there are two children, of which one does everything for the parents and the other vanishes. And the amount of attention and butt-wiping doesn’t make a difference. Some mothers did not raise their kids at all, but the kids are helping them. There are mothers who completely abandoned their kids and led their own lives, but their kids worship them. And sometimes it’s the other way around. I’ve seen so many different cases that I can say one thing for certain–there is no case in which one could say “they didn’t love enough, or paid too much attention.” It beggars understanding. One could conduct entire research projects about why and when kids spit on their dying, powerless, or simply aging parents. Why they abandon them when their parents washed their behinds and fed them when they themselves had nothing to eat. The fact remains: there are monstrously many cases of abandonment. And we are also in one way or another betraying our parents. Nikolay Nikolayevich is walking up and down the floor and knows everyone. Every story. When we went back to his office, I once again overheard concerned voices among the nurses. The director tried to steer me away from all that, but was too late.
I hear from the nurses:
–They’ll take it all away.
I came in and asked what happened. They started to talk all at once about how one of the hospital workers saw the diapers and told the chief physician about them, and then it hit the fan. I don’t understand anything.
–Nikolay Nikolayevich, what happened?
–The hospital will take nearly all of it away.
–But we brought it for the hospice, what’s the hospital got to do with it?
–It makes no difference. Everything goes on the hospital account, then they distribute it among departments. We get almost nothing. We haven’t gotten any medicine for two months.
–Wait, this has to be a mistake. What does the Chief Physician have to do with it? We haven’t brought it for the hospital, only for you!
Then I hear the nurses:
–Girls, maybe we’ll at least hide the underwear and powders? Otherwise they’ll grab it all from us.
Zhenya and I are grabbing the diapers and start writing “For Hospice Only” all over the packages. I know that nobody gives a damn, who cares about the dying. Who cares how the rooms of those who don’t have much time left are washed.
–It’s all the same to them. They’ll open the packages, the writing be damned.
There is a sound of bitterness in their voices. And I lost it.
–Take me to your Chief Physician. We’re gonna have a fight.
They closed ranks. Nikolay Nikolayevich looks at me.
–I won’t given them anything. We are covered by the 2002 regulation concerning therapeutic departments, not hospices, where the majority are bedridden. I have one nurse and two orderlies on each shift. For 22 ill. But that’s only enough people for 5 bedridden. I don’t know why they listen to me and how. I don’t know why they still haven’t left this place where they get almost no salary. Where there are no cleaning and personal care supplies.
In the meantime the nurses are growling.
–What do you mean, you won’t give them anything. They’ll take everything. We need to hide something before they see it. You should have come to us at night.
Zhenya went to butt heads with the Chief Physician over the phone. She spent 20 minutes informing him what’s meant for the hospice and what for the hospital. In the meantime the workers are saying that the hospice won’t get a thing. Kafka is here and the nightmare begins.
A dried up old lady showed up after 30 minutes–the hospital’s accountant.
–We’ll compile an act of receipt, together with a list of everything that was delivered to the hospice. What organization are you from, what should I write?
–Write Sheremetyeva Yevdokia. Write it down.
–It doesn’t sound reputable, it can’t be. What organization?
I’m trying to explain, but their eyes fog over.
–No, that can’t be.
So I tell them:
–Write “Horns and Hooves.”
The doctors and nurses burst out laughing.
The old lady doesn’t get it.
–So write my full name. I’m a private person, I’m not an organization and I’m not a foundation. If you want me to make something up, write “Horns and Hooves”. And yes, it’s only for the hospice.
I look down, and she writes down my name.
We fought for a long time. Zhenya was waving the sword, and I ran around writing on everything with a marker.
I go back to Nikolay Nikolayevich in shock. I know that he’ll get a big chewing-out.
–Nikolay Nikolayevich, what’s all that about?
–We’re used to it. Thanks for helping us keep the aid.
Nikolay Nikolayevich has already relaxed and treated us like his own. We were on the same side of the barricade.
We started talking about the war, Gorlovka, shelling. And when we said our goodbyes, he added:
–By the way, the war actually helped me. You know how? Several shells hit my mom’s garden. And you know what? I threw out the fragments and didn’t need to dig up the soil–it was all dug up. 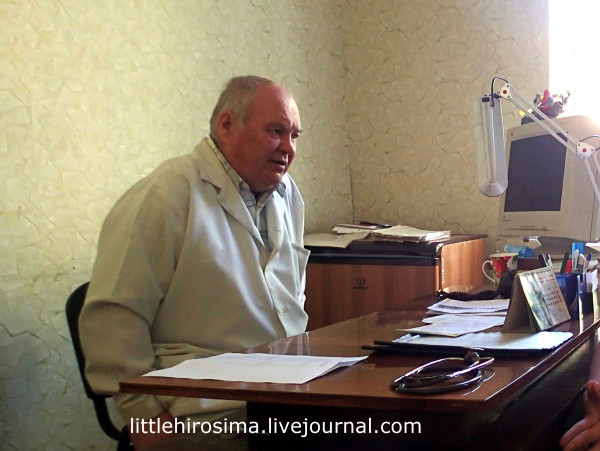