“We are independent in the gas issue”, – happily announces Poland having finally built a terminal for receiving liquefied natural gas (LNG). However, the new marine way of delivering gas from Qatar instead of saving financial resources will entail even much higher costs than earlier. Warsaw is already paying – now, that it has not yet received one single cubic meter of gas. 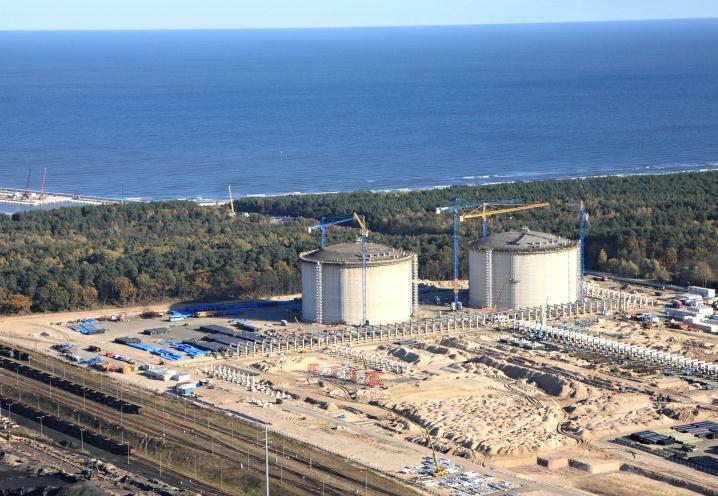 Terminal is under construction

Originally appeared at VZ, translated by Alena Scarecrow for TheSaker

“Poland has achieved her strategic goal: we are independent in the gas issue” said the Polish Prime Minister Ewa Kopacz at the opening ceremony of the new LNG terminal in the city of Swinoujscie, obviously referring to the cherished dream of the Polish government – giving up Russian gas.

“Now we can get 90% of gas from other sources. Next year, provided we work hard, we will become 100% independent from gas supplies from the East”, Kopacz said. According to her, the terminal will allow Poland to purchase liquefied gas from anywhere in the world and get it by sea. “This independence will enable us to negotiate gas price”, the Polish Prime Minister added.

The project has taken 10 years to be carried out. It was initiated in 2006, with subsequent signing a contract with the contractor Saipem (a subsidiary of the Italian energy giant Eni) in 2008 and getting down to construction works in 2011. Initially scheduled to have been completed by 2013, the construction of the terminal was delayed for 2 years.

The terminal will open not earlier than in mid-2016. Prior to the commercial launch it is necessary to obtain and deliver technical or buffer gas which will develop the pressure required for pumping commercial gas. The first two shipments of LNG from Qatar arriving at Swinoujscie in mid-December 2015 and February-March 2016 are going to be used in performing start-up works, maintenance tests etc., which will further postpone the terminal coming into full-scale operation for several months.

Assuring that the new LNG terminal will render Russian gas no longer necessary, the Polish Prime Minister is stretching the truth. The reality is that the country’s energy is still highly Russian gas dependent. In 2014 Poland consumed 15.5 billion cubic meters (bn cu.m.) of gas, with only less than 28% (4.4 bn cu.m.) of it covered by domestic production; the rest 70% (11 bn cu.m.) was imported. In its turn, 80% (8.4 bn cu.m.) of that imported gas was supplied by Russia and only 20% of it came from Germany, Czech Republic and Norway.

The storage capacity of the new terminal, intended to be further extended by 50%, at the present constitutes 5 bn cu.m. which amounts to a third of the annual demand of Poland.

Now Warsaw has provided itself with a new sea route for gas delivery, but at what cost? Qatar, the only supplier Poland has concluded a contract with so far and only for the delivery of 1.5 bn cu.m. of LNG, will allow to utilize not more than a third of the terminal capacity. The remaining two-thirds have not yet been contracted – probably, owing to the disappointment in LNG which turned out to be too expensive.

The contract with Qatar, under which Poland undertakes for 20 years to purchase around 1.5 bn cu.m. of LNG from Qatargas per year on “take or pay” terms, is extremely unfavorable for Polish consumers. The price of Qatar gas is 2.5 times higher than the one offered by Russia – 700 and 265 dollars per one thousand cu.m. correspondingly, as the analyst of “Alpari” Anna Kokoreva told us. Paradoxically though it may seem, last year Poland asked not Qatargas but Gazprom for a gas price discount.

Thus, 8.4 bn cu.m. of Russian gas would cost Poland 2.2 billion dollars, whereas the same amount of Qatar gas – 5.9 billion dollars. Preferring Qatar to Russia would be a great folly, would it not? Nonetheless, Warsaw will have to purchase that 1.5 bn cu.m. so that not to violate the contract. Moreover, it has already been paying for it.

The thing is the contract had obliged Poland to start purchasing Qatar LNG in 2014, given that the LNG terminal had been planned to be built by 2013. However, the construction lagged but Qatar still insisted that the contract obligations should be met. In the end the parties agreed upon Qatar selling the contractual LNG to other buyers at a lower price with Poland compensating the price difference, told us Alexei Grivach from the National Energy Security Fund. So it happened that Poland cannot physically accept the gas from Qatar yet but has already been paying for it. The first two tankers from Qatar scheduled on December and early next year are delivering technical gas under a different contract signed this September.

Thus, the project on Qatar gas supplies has already proved ruinous for Poland. Warsaw will need decades to recoup the cost of the LNG terminal construction that amounted to 977 million dollars.

As it was stated above, Poland has no choice but to buy the 1.5 bn cu.m. of LNG from Qatar. Unless the domestic consumption increases, gas supplies from Russia will supposedly be reduced by the same amount. In this case we are only talking about the diversification of sources of gas supply to the country, not about the outright rejection of Russian gas – Warsaw will merely reduce the share of the Russian gas import from 80% to 60%. Such a diversification will come at a dear cost – Poland will have to overpay 652.5 million dollars for the purchase of 1.5 bn cu.m. of Qatar gas at 700 dollars instead of the Russian one at 265 dollars. To pursue so economically unreasonable a policy will be nothing but a sheer madness.

It should be noted that in order to utilize the spare LNG terminal capacity Poland is planning to obtain gas at the spot market. It has one peculiarity, though, which is its strong dependency on supply and demand – in the summer period when the European gas consumption dies down, the spot gas price might be lower than pipeline deliveries, whereas in the winter time the demand dramatically goes up and the limited market supply sends gas prices sharply higher. Thus, dealing with the spot market buyers can have no assurance their gas needs will be satisfied (unlike Gasprom which guarantees steady supply throughout the year).

Some time ago Warsaw was considering another variant of turning Russia down in the gas issue. Last year Poland initiated reverse gas supplies from Germany by “Yamal–Europe” pipeline, which had been made possible through the modernization of “Malnov” gas-pumping station in East Germany (its reconstruction was started in 2012). Poland threatened at the time that this project would provide her with up to 5.5 bn cu.m. of gas a year in case Russia halted supplies. However, despite all her ambiguous political statements and discontent over prices, Poland has not ceased purchasing Russian gas.

Either way, choosing reverse supplies from Germany means Poland will continue buying Gazprom gas but through an intermediary. As for Gazprom, it will just make up for the lost volumes by increasing supplies to Germany with Warsaw subsequently having to pay also a margin to the intermediary. That is exactly what the Ukraine – which bought only reverse gas from Europe from June to mid-October this year – is doing now.

It seems Russophobia is a disease which attacks that the cognitive and reasoning centers of the brain leaving its victims absolute idiots as evidenced by the Poles.

Blockheads from Eastern Europe even unable to understand what is good for them or what is bad!

It seems to give credence to ” Wood stoves made in Poland, from real wood!