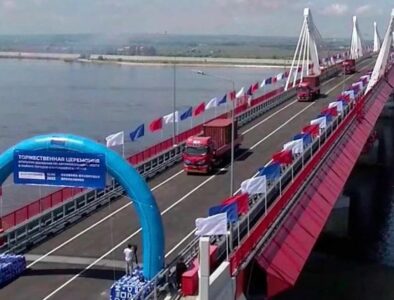 The first bridge connecting Russia and China was opened in the Russian city of Blagoveshchensk and Chinese city of Heihe. The opening ceremony was held on June 10, 2022. The bridge was planned to open back in 2016, but the coronavirus pandemic was to blame.

Presidential Envoy to the Far Eastern Federal District Yuri Trutnev commented on the opening of the bridge: “In today’s fractured world, the Blagoveshchensk – Heihe bridge between Russia and China has a special, symbolic meaning. It will become another thread of friendship that connects the peoples of Russia and China. Construction of the bridge began in 2016, thousands of people were involved in the construction, working around the clock from both the Chinese and Russian sides.”

Hu Chunhua, deputy premier of China’s State Council, also commented that the opening of the bridge shows the readiness of both countries to deepen all-around cooperation.

He said: “The Chinese side is ready to jointly use the opportunities of the launching of the bridge crossing with the Russian side, constantly promote transport interconnection, provide better logistics services for personnel movement, and consolidate trade communication.”

The transport bridge connects the Russian village of Kanikurgan near Blagoveshchensk and the Chinese village of Changfa near Heihe. The first cargoes, such as oil, lumber, car parts, and electrical equipment, have already crossed the river.

The capacity of the bridge is 630 trucks, 164 buses and 68 cars. The length of the access roads is 18 km. It is two-lane, and the total width of the roadway is 11 meters. It includes six kilometers of road in China and 13 kilometers of access roads in Russia, in which another 278 meters is a bridge across the Kanikurgan channel. The price to cross the bridge is $150. The local administration wants to lower the price, but only after 20 years. The Russian authorities have invested 14 billion rubles in the construction of the bridge, while the Chinese donated 4 billion rubles. However, the bridge was built equally, 540 meters each, and the headquarters was built in Heihe, while the branch was located in Blagoveshchensk.

Passenger cars will also be allowed to cross the bridge after Beijing facilitates COVID restrictions.

Previously, when there was no bridge, all trade, and transportation of people was carried out by ships. For the first time since 1995, the countries began to cooperate in the construction, although the idea of the bridge existed in the 1980s. The Chinese completed the bridge faster, and in 2019 the parts were connected. Although bridges between China and Russia have been built before. For example, they previously built a railroad between Nizhelensky and Tongjiang in the Amur region, but later suspended construction.

Another win for the multi-polar world.

For sure, huge development!

Just another link in the ever-expanding BRI. The psychotic western inbreed pedo puppet leaders continue to lead their countries down the drain. These puppet leaders that serve the Talmudic Tapeworm deserve to be hung.

Remember, ALL WARS ARE BANKER WARS. Why? Because wars are expensive, a waste of resources, and non-beneficial to humanity. War funding ONLY enriches a few at the cost of many.

This strategic bridge cuts the distance to western Russia by 930 miles and allows road vehicles rather than ships to quickly reach each others countries. It would also help transport military vehicles in times of war with the west.

That is exactly what I was thinking. I think it is time for Russia, China and other allies to form their own version of NATO that way if one nation is at war, all the nations can use each other’s military as a cohesive fighting force. A type of Eurasian military alliance comprised of Russia, China, Belarus, North Korea and other nations can join the bloc down the road as well. I actually think Russia and China are already planning to announce such an alliance in the near future. Imagine having China as a military ally with its massive productivity, manpower and industrial base. Russia having the most advanced weapons and military tactics, oil, gas and resources coupled with China’s tremendous industrial output and infrastructure.

Also the whole Middle Eastern axis of resistance. With Iran underground air defence bases to slow down enemy Air Force, with Hamas, Hezbollah, PMF, Houthis etc will be able to stop NATO coming from the sea, sky and ground because these militias have the weapons to halt all nato activities. Also man power of trained guerrilla soldiers from years of experience in real life scenarios will lower the morale of NATO troops. Like you said Russia has the techniques, so does Hezbollah. Hezbollah mastered the Russian Maskirovka technique which was partly trained to them by Russia and Iran (Russia trained Iran as well) and because Hezbollah military leaders have studied every single war dating back to our Islamic wars, but mainly focusing on guerrilla tactics. For example Hezbollah used the Vietnamese and Korean bunker and tunnel tactics to beat Israel. Russia, Iran, Syria and Hezbollah have years of join operations in an actual operation room together, so their chemistry is amazing and has been put to the test.

For example If NATO wants to use Pakistan and India as a base to fight China, they’ll most likely utilize the Arabian Sea/Gulf of Oman. Houthis in Yemen and Iran will easily shut it down, and give China some breathing room. Tajikistan has recently created a huge drone factory with Iran, and I believe Russia will also join in. Tajikistan is also a neighbour to China.

Another example can be Azerbaijan for Russia, which will be even harder. even though the government of Azerbaijan are puppets to the west, there’s a militia in Azerbaijan part of the axis of resistance, Iran is right next to them, and also Kazakhstan.

There’s multiple other scenarios that will benefit this alliance, and will literally fuck NATO up so bad, countries will leave NATO to stay neutral

I disagree with that article 5 where if one nation is at war, they all are at war. The belligerents START wars even when others actually go in. They should have a military alliance WHEN the circumstances are there for one. The UN is heavily compromised and although there are many good things with regard to the UN, an alternative should be created. Africa deserves a few vetoes and the EU should only have one veto.

Land routes always faster, but sea routes much cheaper, were cheaper before that ship with containers stuck in Suez. Following restrictions of western insurance companies after beginning of embargo war against Russia makes land routes more profitable for delivery companies.

The bridge was scheduled to open in 2016 but Covid prevented that. That part could use a rewrite.

What premonition… That Convid deep state/NWO crap is still coming up. Shame on China, and Russia for playing along.

This is actually a HUGE story. China is going all in fully backing Russia, no turning back now.

Yep, NATO is going to use this as an excuse to the world that China is using this bridge to transport military equipment. They might use this excuse to sanction China, and China will actually help Russia

The US of A opposes this bridge due to it will affect their”democracy” . Says diaper wearing Biden

'OSLO FREEDOM'=TEORRISTS
Reply to  Your mama

This opens the possibility of ‘all truck & container’ shipping. It opens a substantially cheaper and quicker way to ship. China wants the Russian natural resources, Russia wants electronics that China can provide. Bridges and pipelines between the tow make is easier.

China is a masked giant. That scares me.

Russian trade increasing with many nations—-thanks to moron sanctions, Russian reserve fund increased 13 billion euros May 2022….US media claims denazification in Ukraine will bankrupt Russia….”if you can get people to believe absurdities you can get them to commit atrocities”. Voltaire

Better late than never,besides logistics and defense advanced even further to compliment trades.

I don’t think that’s a good thing. to tell the truth, I think that China represents a greater danger for Russia than NATO and the West. as the chinese get stronger, they become more and more aggressive, they have never given up their claims on siberia. Russia should avoid providing means of indirect colonization for the Chinese. This bridge is a very bad idea…

You’re wrong, history proves it. There were tens, may be hundreds, wars from western direction and just 2 from eastern: 1 in 13th century –attack of mongols; and 1 in the beginning 20th century — attack of Japan. All that we had with China is boarder accident, this is nothing compared to existential threat coming from west. Russia came to the Far East in 19th century, but if to count wars from this moment only, the balance will be also negative for the west. China is very peaceful country compared to any western or eastern european, even Romania attacked us twice in 20th century, it’s the same Romania, which was our ally in WWI and was created by the will of russian emperor or they could stay under Turkey. Same with Bulgaria — liberated by Russia, but was in hostile alliances in both world wars, because their governments were controlled by germans. Now they are controlled by anglo-saxons. Even Italy (including Kingdom of the Two Sicilies) and Spain (Blue division) attacked us. Spain! So who is the threat is not the question.

The Chinese are much more powerful today than in the 19th or 20th century. Their political commentators do not hide the fact that they consider Siberia to be Chinese and that Russia took advantage of the weakness of the Chinese empire at the time to seize it. The Chinese leadership has predatory behavior, just look at how their “help” in Sri Lanka has become a kind of colonization with a port and several other infrastructures that they “rent” for 99 years (which is very reminiscent of the situation of Hong Kong and how the British leased the port from the Chinese for 99 years). The Chinese behave like the expansionist Japan of the Meiji and Shōwa eras. I am not saying that the West does not present a threat to Russia, far from it, I am saying that China with its predatory behavior, and in view of the current difficulties that Russia is encountering in balancing its economic relations, represents a danger far greater than the danger represented by the West. Russia will imperatively have to diversify its economic relations and reduce the share of Chinese in its trade. This bridge is a step in the wrong direction

It seems, in the modern world, that all roads will lead to Beijing. Meanwhile western shysters are busy trying their hardest to hold together their old order, yet calling it a new one. Where have we heard that before.

This is exactly what Kissinger was warning about a Russia that is out of the west’s grasp to exploit… The end of the WEF global cabal.

and the US will jump up and down and refuse to see that the world has changed. but in the meantime, they can play war with the, UK-NAZI and drag the Poland into it and alienate Germany.