Iraq has been facing the threat of the terrorist group since its offensive in the country in June, 2014. 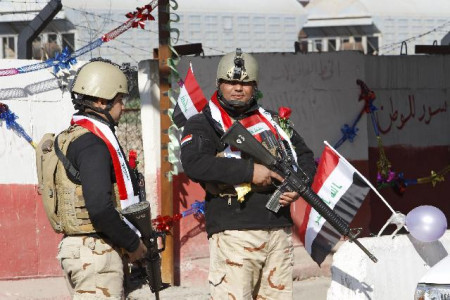 Throughout its history, Iraq has continuously being threatened by armed conflicts that have driven the nation into deep instability stages and humanitarian crisis.

Nowadays, Iraq’s occupation by militants of the Islamic State mostly in the north and the west of the country has plagued the terrorist-seized territories with violence; but also, with occupation, resistance emerges as well.

The fight against Daesh in Iraq encompasses a series of groups such as the Iraqi Armed Forces and Popular Mobilizations Units which, with international support are continuously seeking to regain territories held by the extremists in joint and coordinated operations.

Iran is an important part of this international cooperation with the support provided by its Armed Forces and government.

Brigadier General Hossein Dehqan, Defense Minister of the Islamic nation held a meeting with Faleh al-Fayyad, Iraqi National Security Adviser in Tehran on Sunday. Dehqan stated that: “…unity among Iraq’s Shia and Sunni groups in the campaign against terror has been a major achievement”. Iraqis should remain united until the day of final victory over Daesh Takfiri terrorists, he added.

Important territories have been regained from terrorist dominion with the intervention of the Iraqi Army and popular fighters, Fayyad said.

Iraqi government forces are managing to push the terrorists from key urban areas in the north and the west of the territory.

But combat on the ground is not the only thing going on in Iraq. Humanitarian crisis has deepened dramatically in the country. As an example of that, Bagdad has recently released information that shows how they are not able to fund more than 43% of the needs of Iraqi citizens from its budget. Over USD 1.5 billion are needed to give a proper response to the humanitarian crisis that the fight against the Islamic State has originated.

More than 3.3 million people have been displaced by war in Iraq since 2014. Shias, Sunnis, Kurds, Christians, all of them have been under attack of the militants of the criminal organization with no distinction.

Crisis in Iraq has also worsened with a significant reduction in the government budget (revenues) due to the slump in the prices of oil in the international market. For that reason, Iraqi government has called the international community to help bridge “the “deficit or financing gap”.