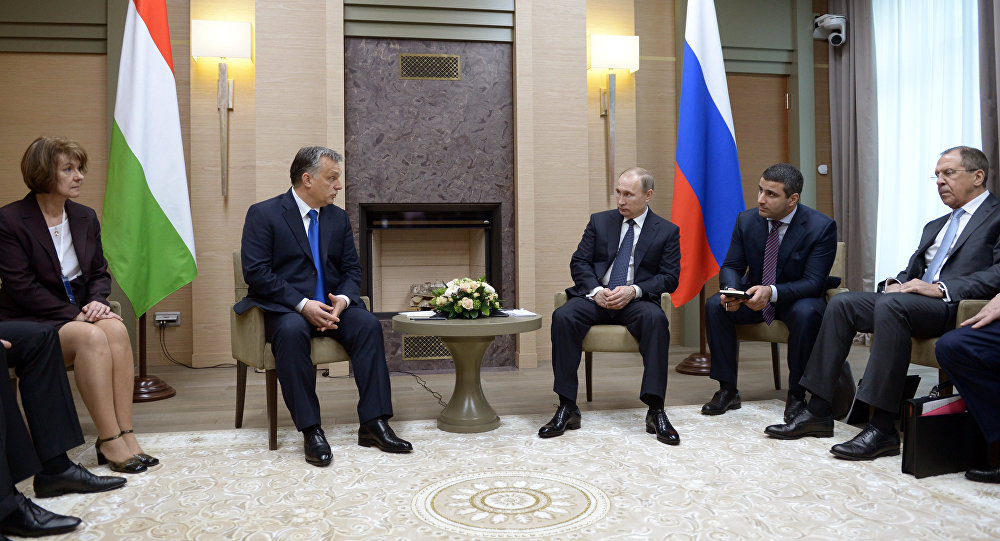 Originally appeared at FSKSRB, translated by A. Đurić exclusively for SouthFront

In the EU ranks are growing voices in favor of the abolition of anti-Russian sanctions. As the Federal Chancellor of Germany Angela Merkel made it clear that she is “ready” to lift the sanctions, even harder about it pleaded the Slovak Prime Minister Robert Fico. He called the EU sanctions against Moscow a “nonsense” and said that “as soon as they are abolished, it will be better.” Head of the Slovak Cabinet believes that blame for the conflict in Ukraine should not be put only on Russia, instead, for the end of the Ukrainian crisis it is necessary to reach agreement between Russia and the United States. [http://fapnews.ru/234632-slovakiya-prizyivaet-snyat-sanktsii-s-rossii/]

Even if one takes into account that the passage of Robert Fico on the Russian-American agreement was apparently imposed by the development of the situation around Syria, it is difficult to deny that the Europeans are all tired of the “war of sanctions” with Russia. Especially as the financial and economic interests require of them a completely opposite approach. This is especially confirmed during the visit of Prime Minister of Hungary Viktor Orban to Moscow, which was held these days – who has called Russia “a partner” of his country and who said maybe naive but very current thought: “Without proper good economic contacts between Russia and Hungary, the Hungarian Industry will be dysfunctional “. [http://www.kremlin.ru/events/president/transcripts/51352]

Suffice it to recall that Russia ensures the needs of Hungary in oil – 75% and natural gas – 65%, and in December 2015, “Gazprom” extended the contract for the supply of Russian natural gas with Hungarian partners to the end of 2019. About 40% of the electricity used in Hungary, is produced in nuclear power “Paks” which was built with the participation of Russia, and which should be again modernized by the Russian company “Rosatom”. [http://www.vestifinance.ru/articles/67627]

Hungarian Prime Minister has made it clear that at the upcoming June summit of EU, anti-Russian sanctions will not be extended automatically, but will be subject to a comprehensive review.

Of course, financial and economic considerations are a strong argument in favor of gradual “sobering” of Europeans – many of whom are becoming aware of who has, in fact, a pleasant time during interruption of trade relations of the EU and Russia. Jean-Pierre Thomas, one of the authoritative French entrepreneur, head of investment company Thomas Vendome Investments, testifies that anti-Russian sanctions do not allow its country economy to grow around 0.5% of gross domestic product per month. Although the political initiative in this case came, and still comes from the United States, Europe suffers losses – which trade volume with Russia exceeds ten times over the analogous indicators for the Russian-American trade. “So, who’s at a loss? Europe is at a loss, not the US “- said Jean-Pierre Thomas. [http://www.vestifinance.ru/articles/67010]

Germany suffers losses too. According to the IFO National Institute of Economic, index of business sentiment in the country declined in February, much stronger than assumed even  by analysts that are pessimistic: up to 105.7 points compared to 107.3 in the previous month and taking in account the forecast of 106.7 points. It is a continuous deterioration when it comes to the perspective the strongest economy in Europe – German experts testify that this circumstance associated with the continuation of the crisis in trade and economic relations between Germany and Russia. February’s preliminary purchasing managers index registered a decrease in business activity in the manufacturing sector of Germany to the 15-month minimum. [http://www.vestifinance.ru/articles/67795]

However, the economic losses are only one side of the problem with sanctions. The other side is connected to the deepening social and political crisis in the EU – who, entering into a conflict with Russia, at the same time found itself under the impact of the problem of refugees. It turned out that the European Union is “powerless” against the massive migration from the Middle East, European politicians – “are lying”, influx of the refugees is a most “serious issue” with whom the EU has faced since the time of its formation – such is the opinion of the minister of foreign affairs and foreign economic ties of Hungary Péter Szijjártó. According to the forecast, the current crisis will remain a problem “for many years”, and a number of people residing in the EU in 2016 will be even higher than in 2015.

Europe needs to protect its external borders, demanding that migrants comply with the rules of the EU countries into which they enter, and then to seek the “root causes” of migration on the continent, including the war in Syria. And here, according to the head of the Hungarian foreign policy department, Russia which is under EU sanctions, can help the European Union. Without the agreement of Russia and the US the solution of “the Syrian crisis would not have been possible” – says Péter Szijjártó. [http://www.vestifinance.ru/articles/67599]

But there is another important factor that drives the ruling elite in Europe to seek the path of rapprochement with Russia, despite the position of Washington and Brussels – the mood of their own voters. Opinion polls in most EU member states show a rise in the popularity of patriotic forces that stand against the dictates of the European Commission, which advocate for the consistent defense of national-state interests and the development of cooperation with Russia. Closest “standoff” is expected in parliamentary elections in Slovakia (the fifth of March) – EU there can expect shock in the form of success of the People’s Party “Our Slovakia” led by Marijan Kotleba.

According to data from the Slovak independent media, Kotleba can collect more than 12% of the vote, taking second place, just behind the SMER of Prime Minister Fico. Officials sociological services do not even try to engage the People’s Party “Our Slovakia” in the questionnaires – forgetting that in November 2013 Marijan Kotleba, despite all predictions, won the second round of elections for governor of the Slovak region Banská Bystrica, with 55% of votes.

So the EU is changing before our eyes. And the Russian propaganda – that Brussels love to allude – with that has nothing to do. Simply the overall policy of the EU in recent years had little in common with the interests of European countries and nations – including those who now dream to find them self as a part of this organization. When this is understood, as usual, it is painful. But this is exactly the case when it is said – better late than never.