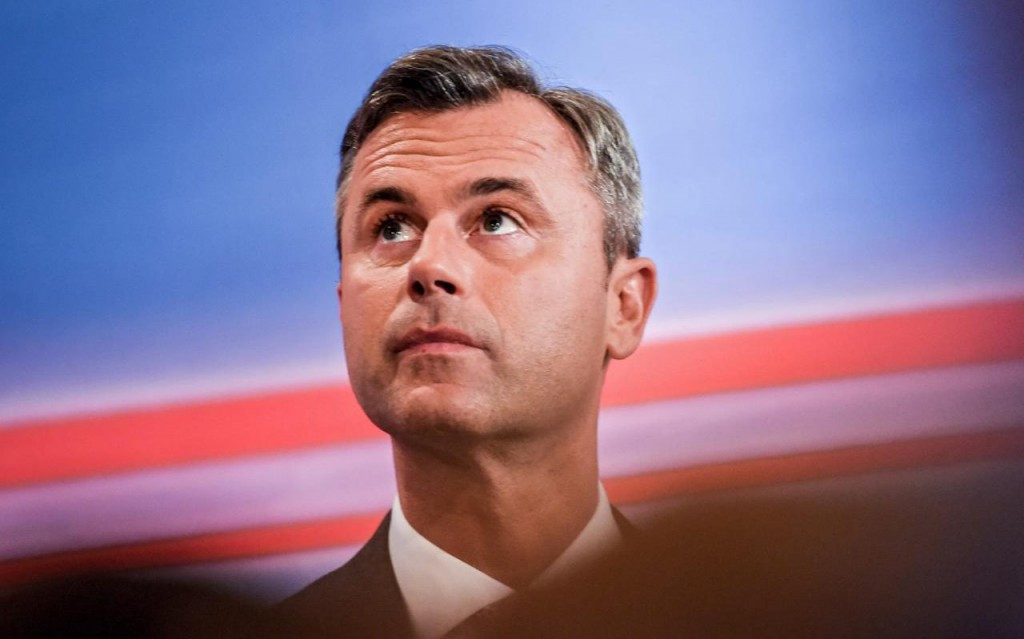 Europe will never be the same. Literally before our eyes, it makes the sharpest turn in all its post-war history. Evidence of this are the presidential elections in Austria and the stunning first round victory, that attained the right wing Eurosceptic, supporter of the Russian Crimea and an independent Southeast Ukraine – Norbert Hofer. What could this mean for Europe, Russia and the world? The outcome of the elections in Austria on April 24, 2016 exceeded the wildest predictions of sociologists and political scientists.

The emergence of the new right wing

Since 1945, the political situation in Austria is determined by the interaction of two political forces: the Austrian People’s Party and the Social (1991 – Socialist) Party of Austria. The first always had a moderate-right conservative positions with elements of liberalism, analogous of the German Christian Democratic Party. The second is a classic left-wing party, which over time made a turn to the center and even created a coalition with the Conservatives. For more than 70 years one of these two parties has consistently been present in the coalition government. And the president of Austria has always been a representative of either party. But now the results of the first round of the presidential elections in 2016 are the first breakthrough of this system, which can finally be broken on may 22.

Created in the 50s, the Austrian Freedom Party (FPÖ) has long been the “third force”, but played a role in the background, combining a national radical rhetoric with that of cooperation with the Socialists. Maintaining about 10% of national elections for a long time, the Austrian Freedom Party could claim the status of parliamentary opposition, or the place of assistant of the Social Democratic Party.

In the 80s the leadership of the Austrian Freedom Party tried to change the nationalist platform with a liberal one, which led to a profound Party crisis and a sharp drop in its rating. In response to this unfortunate political decision, a new party leader was elected – Joerg Haider , a nationalist and conservative who created good preconditions for its revival.

In the 90s, during Austria’s accession to the EU and the intensification of migration processes, the popularity of the Austrian Freedom Party began to grow rapidly. The peak of this growth were the elections in 1999, when the Austrian Freedom Party received almost a third of the votes of all voters and persuaded the Austrian People’s Party in 2000 to create a common coalition in power. The entry of the far right in the Austrian government angered the European authorities so much, that for while Vienna was subjected to a peculiar boycott. But on the other hand, its entry in power in alliance with the ideologically remote Austrian People’s Party and the complicity of the Austrian Freedom Party in some unpopular decisions in the government, led to a deep party crisis and a steep drop in popularity at the elections in 2002. As a result, Haider left the party in 2005 and began the creation of a new right political project – “Alliance for the future of Austria”, but failed to repeat the success of 1999 as a new alternative force. Three years later, Haider died in a car crash and his political project dissipated. On the other hand, the Austrian Freedom Part is experiencing an unprecedented surge in popularity.

A breakthrough in the Austrian elite

After the withdrawal of Haider, the Austrian Freedom Party was headed by Heinz-Christian Strache. And one of the brightest personalities in this Eurosceptic party was a former aeronautical engineer Norbert Hofer, who in 2013 was elected deputy chairman of the parliament.

The Austrian Freedom Party took an uncompromising stance on the further EU integration of Austria, of the adoption of the EU Constitution and of Turkey’s entry into the EU, as well as on immigration and the Islamization of Europe. This ideological consistency, along with a deep stagnation that gripped the Austrian economy during the rule of the coalition of the Austrian People’s Party and the Social Democrats, gives a startling effect today.

Even during the election campaign for president, sociologists promised a future sensation. All signs pointed that the candidates of both major parties will not be able to reach even the second round. As it happened. But no one expected the stunning results at the end of voting.

According to sociologists, the leader in the presidential race in the first round was to be Alexander Van der Belen, who earlier headed the Green Party. Sociologists predicted 26 percent of the votes fro him, while the candidate of the Austrian Freedom Party was given much more modest results. But it happened entirely differently. According to the results of the first round, a convincing winner with 35.4% is exactly Norbert Hofer.

Alexander Van der Belen is after him with more than 14%, gaining the sympathies almost every fifth voter. In third place is the former chairman of the Supreme Court, Irmgard Gris, who is supported by the local liberals. And here’s the paradox: the representatives of the parliamentary pro-European parties – the Austrian People’s Party and the Social Democratic got to fourth and fifth place, as each of them get about 11% of the vote. No one is willing to make unambiguous predictions for the final campaign. The voting results are not definitive. About 10% of Austrian voters voted by mail, but their voices are just one accent and will not change the outcome. More unpredictable are the results of the second round, which stand on May 22. On the one hand the supporters of candidates could theoretically drop and unite in support of Van der Belen – so that the far right Hofer does not become president. On the other hand, what representatives of the Austrian People’s Party and the Social Democrats have been saying recently, in some respects coincides exactly with the ideas of Hofer. Amid the migration crisis and anti-European rhetoric across Europe, Austrian Eurosceptics, including moderates could mobilize in support of Hofer. Moreover, Hofer’s success can be explained to a certain extent, by the increase in turnout – people who normally do not go to the polls voted; but these people definitely do not agree with the policy, which endangers their security and violates their usual lifestyle.

So what are Hofer’s ideas? What makes him such an important figure? He is a convinced Eurosceptic and a supporter of the traditional family, as well as a radical opponent of the migration policy of the EU. Hofer supports the idea of tough measures to combat crime and to put it mildly, he dislikes Turkish President Erdogan . A Hofer interview in March for Die Presse has gained immense popularity and caused an absolute hysteria in Kiev, as commenting on the events of 2014 in the post-Soviet space, he directly said: “The main mistake was made ​​long ago, when it was announced that Crimea is no longer Russian.” As a candidate for president of Austria, Hofer stated that the referendum in Crimea should have been held immediately after the collapse of the Soviet Union, and that regardless the presence of international observers, the inhabitants of the peninsula will support accession to Russia. In addition, Hofer called for a referendum on the sovereignty of eastern Ukraine, i.e. he recognizes the right of the population of historic Novorossiya, to determine their destiny. Hofer also calls on Europe to be pragmatic and to repeal the anti-Russian sanctions, as both Russia and Austria suffer from them. With this, Hofer immediately set off angry posts on social networks by Ukrainian politicians and diplomats, which seem to not bother him at all. Ukrainian media begun to call him the “pro-Russian candidate” which is false. Hofer is not a pro-Russian candidate, but a completely independent and pro-Austrian politician. If you look at things realistically, then any European patriot, should be interested in removing sanctions and developing relations with Russia, because it is beneficial mostly to European countries and their independence from Washington .

After the announcement of the election results in Austria, the “Europhile’s” are griped by an absolute panic. Analyst Herman Rudolph at Germany’s Tagesspiegel writes: “One third of the vote for the leader of the far-right Austrian Freedom Party! – the catastrophe could not be worse … Politics in neighboring Austria are on the brink of the abyss. The success of the Austrian Freedom Party is in favor of rearranging the political map of Europe, particularly noticeable in the eastern part of the EU.”

Austria occupies a particular place in Europe. Vienna has been one of the main centers in the entire Western civilization for a long time, and even today it is difficult to assess its cultural, political and economic role in Europe. Austria has something to be grateful to Russia. Fundamentally, Vienna was not perceived as an accomplice in Nazi crimes, but as a victim. The USSR voluntarily withdrew its troops out of the territory of Austria after the war. Even today Austria keeps the monuments of the Soviet soldiers …

After the start of the “new Cold War” Austria became the first country in the West, where Russian President Vladimir Putin made ​​a purposeful official visit with a delegation. By virtue of its geopolitical placement and history, Austria is like a bridge between East and West, and unlike many of its neighbors, it has kept traditionalism and conservatism healthy. Although Austria submitted to the Eurovision the infamous Conchita Wurst not all in the country actually support this person. Representatives of the Austrian Freedom Party pointedly refrained from any congratulations after the singer won the contest, unlike many EU politicians and officials. The success of the Austrian Freedom Party in the presidential elections in Austria, and the Eurosceptic anti-Kiev referendum in Holland, is a sign that Europe is rapidly changing. Of course, Hofer has not won the elections yet, and besides an acting president in a parliamentary Austria, does not have such powers as the president in France. But the fact that Hofer has won the first round with almost twice the representatives of the power coalition put together, states that the executive branch in Austria has completely lost public support. In the best case, after such a failure, the MPs and ministers should resign and go to new elections. It is not excluded that in early summer we can expect such a development.

The consequences for Russia and the West

The success of the Austrian Freedom Party and Hofer give new opportunities for the future. First, there is a high probability that Austria will block sanctions against Russia, which would mean that their automatic extension in the EU will no longer be possible. Second, the question of formal recognition of Crimea as part of the Russian Federation will be raised in the West. Third, in the West will appear a serious factor, supporting the separation of Novorossiya, which will contribute to a real federalization of Ukraine or its de facto partition.

The Austrian success could have a major impact on skeptics in other EU countries. Right-wing and left-wing opponents of a united Europe, under the dictates of Brussels and Washington could dramatically strengthen their positions. In Germany, Spain, France, Italy and the Netherlands, various politicians warmly welcome the success of Hofer, which in turn calls into question anti-European projects such as TTIP and the European integration of Ukraine. And along with that Erdogan, whom Eurosceptics traditionally dislike.

The European Union has exhausted its potential in its existing form and now Hofer has a chance to become the hero who can knock down the house of the Brussels mutant, and unlock the process of its transformation into something harmonious and viable. In any case, the citizens of Austria can contribute to this, but will they use this chance, we will find out on the 22nd of May.