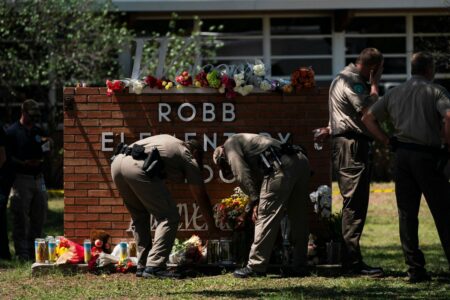 Societies generate their own economies of tolerable cruelties and injustices.  Poverty, for instance, will be allowed, as long a sufficient number of individuals are profiting.  To an extent, crime and violence can be allowed to thrive.  In the United States, the economy of tolerable massacres, executed by military grade weapons, is considerable and seemingly resilient.  Its participants all partake in administering it, playing their bleak roles under the sacred banner of constitutional freedom and psychobabble.

Just as prison reform tends to keep pace with the expansion of the bloated system, the gun argument in the US keeps pace, barely, with each massacre.  With each round of killings, a script is activated: initial horror, hot tears of indignation of never again, and then, the stalemate on reform till the next round of killings can be duly accommodated. “It isn’t enough to reiterate the plain truth that the assault weapons used in mass shootings must be banned and confiscated,” observes Benjamin Kunkel.  “Instead, every fresh atrocity must be recruited into everyone’s preferred single-factor sociological narrative.”

In Uvalde, Texas, a teenage gunman (they do get younger) made his way into an elementary school and delivered an unforgettable May 24 lesson.  When he had finished at Robb Elementary School, 19 children and 2 adults had perished.  But even this effort, in the premier league ranking of school killings, failed to top the mass shooting at Sandy Hook Elementary School in Newtown, Connecticut in December 2012.  On that occasion, 26 lost their lives.

The horror and indignant tears were duly cued.  President of the United States, Joe Biden: “Why are we willing to live with this carnage?  Why do we keep letting this happen?” he rhetorically intoned at a press conference.  “For every parent, for every citizen in this country, we have to make it clear to every elected official in this country: it’s time to act.”  This would involve the passing of “common sense gun laws” and combating the gun lobby.

The next day, Vice President Kamala Harris reiterated the formula.  “We must work together to create an America where everyone feels safe in their community, where children feel safe in their schools.”

The politicians are duly accompanied by the talking heads, such as Ron Avi Astor, described by NPR as “a mass shooting expert”.  With this unsavoury appellation, we are told that this UCLA professor is puzzled as to why negligible changes to gun laws have taken place since Sandy Hook.  In coping with such puzzlement, he suggests an old academic trick: reframe the problem to lessen its gravity.

With some gusto, Astor proceeds to say that schools in the US have been doing fabulously well in coping with violence – as long as you take the long view. “If you look over the last 20 years, really since Columbine, there’s been a massive, massive, massive … decrease in victimization and violence in schools.”  Diving into the silver lining in his own massive way, he finds “reductions” in violence in the order of 50 to 70 percent.

It never takes long for the economy of tolerable massacres to generate the next round of scrappy arguments, with the corpses barely cold.  The common one is that of shooting frequency.  Was this a good year relative to the last?  This year, the United States has suffered 27.

Since 2018, Education Week, showing how school deaths should very much feature in planning curricula, has taken a grim interest in the whole matter.  Reading its compiled figures – “heartbreaking, but important work”, the journal claims – is much like dipping into stock market returns with the requisite amount of sensitivity.  In 2021, there were 34 school shootings, a real bumper year.  In 2020, it was poor on that front: a modest 10.  Both 2019 and 2018 saw higher returns: 24 each.

If you wish to be entertained by the ghoulish nature of it all, Education Week also gives us some infotainment with a graphic on “Where the Shootings Happened.”  Dots feature on a map of the country.  “The size of the dots correlates to the number of people killed or injured.  Click on each dot for more information.”  Where would we be but for such valuable services?

To give credence to the seemingly immutable nature of this economy on shootings, platoons of commentators, equipped with various skills, argue about responses, most showing that common sense, in this field, is a noble dream.  The conservative National Review takes the view that “tougher background checks” would hardly have worked for the Uvalde shooter.  There was no paper trail flagging him as a threat, nothing to suggest that he should have been prevented as a “legal adult from purchasing a firearm.”  The implicit suggestion here: only nutters kill.

The business of guns is the business of a particular American sensibility.  With the school shooting still fresh, various members of the GOP and Donald Trump affirmed their interest in appearing at a Memorial Day weekend event hosted by the National Rifle Association.  In a statement on the shootings, the NRA expressed its “deepest sympathies” for the families and victims of “this horrific and evil crime” but preferred to describe the killings as the responsibility “of a lone, deranged criminal.”  Leave gun regulation alone; focus on school security instead.

With that brief formality discharged, the NRA expressed its delight at its forthcoming Annual Meetings and Exhibits event to take place at the George R. Brown Convention Center, Houston between May 27 and May 29.  “The Exhibit Hall is open all three days and will showcase over 14 acres of the latest guns and gear from the most popular companies in the Industry.”  It promises to be fun for the whole family.

Then comes the thorny matter of definitions, a sure way to kill off any sensible action.  From boffin to reactionary, no one can quite accept what a “school shooting” is.  Non-profit outfits such as the New York-based Everytown for Gun Safety include any discharge of a firearm at school as part of the definition.  “In 2022,” the organisation claims, “there were at least 77 incidents of gunfire on school grounds, resulting in 14 deaths and 45 injuries nationally.”

Everytown for Gun Safety is keen to paint a picture of annual murderous rampage: 3,500 children and teens being shot and killed; 15,000 shot and injured.  Some 3 million children in the US are exposed to shootings each year.

The tone underlying such a message is much at odds with the rest easy approach taken by Astor – what Australians would call the “she’ll be right, mate” caste of mind.  It is certainly Panglossian in nature, aligning with the views of cognitive psychologist Steven Pinker, optimist extraordinaire on the human condition.  Taken holistically, he keeps insisting, we live in far better, less violent times than our forebears.  Such massacres as those at Sandy Hook should not be taken to mean that schools have become less safe.  “People always think that violence has increased because they reason from memorable examples rather than global data.”  For Pinker, the 2013 joint survey by the Departments of Justice and Education on such statistics as rates of victimisation since 1992 to non-fatal victimisations was sufficient rebuke against the pessimists and moaners.

The Uvalde massacre will, in time, be absorbed by this economy of tolerable violence.  The anger will dissipate; collective amnesia, if not simple indifference, will exert its dulling sleep.  The dead, except for the personally affected, will go the way of others, buried in the confetti and scrapings of statistics.

When is Project Blue Beam going to be rolled out?

Ukraine has lost already its exit to Asov sea forever. Better for the nazi-fascist regime lead by the comedian jew-nazi Zelensky to make peace with Putin before they also lost its exit to Black sea.

All i will say is that there is a sick, coordinated, evil force in the US who make these things happen