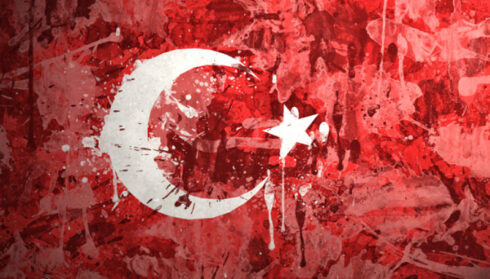 Turkey in the 21st century began to rethink its place in the international system. Turkey is not satisfied with the role of a junior partner of western countries; it is aimed at the status of a regional and even world power. If Turkey first acted in an economic and cultural spheres, now Ankara is conducting an aggressive and offensive foreign policy. Now it is not afraid to openly declare its interests and dictate its own rules of the game. Leaving aside the doctrines of “Zero problems with neighbors” and “Strategic depth”, Ankara has begun to implement the “Blue Homeland” doctrine.

The doctrine of the “Blue Homeland ” was developed by Admiral Cem Gürdeniz in 2006 and refined to the level of state strategy by the former commander of the Turkish Naval Forces, Rear-Admiral Cihat Yaycı. The essence of the doctrine is that the continental shelf and the water area of Turkey have the same importance and significance for the state as its land. Therefore, Turkey should promote its interests at sea, as actively as on land. 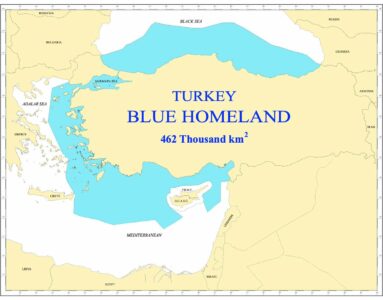 Yaycı conducted a scientific study and determined that the total area of the Blue Homeland, including the continental shelf, the water surface and the waters of the seas, is 462 thousand square kilometers. Turkey’s maritime jurisdiction areas are determined by the following principles, as stated by Admiral Cihat Yaycı:  1) equity (States with opposite coasts share the seas fairly), 2) superiority of Geography (Based on the mainland as the delimitation means that the islands that are on the opposite side of the bisector line have sea authority as much as their territorial waters), 3) proportionality (In the delimitation, it means that the maritime jurisdiction states will have is proportional to their coastal lengths), 4) the State of ‘Not closing’ (means that the islands close to the coasts of another state should not prevent this coast from sailing). Thanks to the doctrine, all these activities from fishing and shipping to naval policy began to acquire a structured and logical form that meets the interests of the country. In addition, it is the doctrine that allows it to build verified and pragmatic relations with the countries of the region, based not only on cultural and religious similarities, as it was before, but on the real interests of the country. 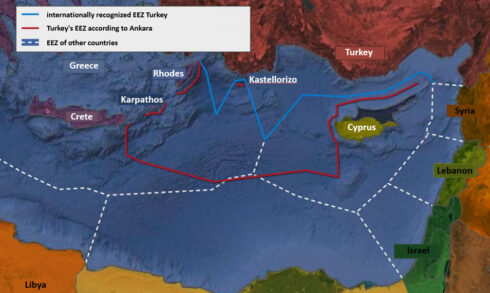 This doctrine is an open attempt to redistribute the balance of power in the sea areas adjacent to Turkey. With the help of this document, Ankara makes its claims to the role of a strong maritime power. The goal of the strategy is to return Turkey to a dominant role in the Mediterranean and strengthen the country’s military and trade power. The implementation of such an ambitious program requires well-developed naval forces. It is necessary to analyze the state of the Turkish Navy in order to understand what Ankara is capable of in the implementation of its doctrine.

At the moment, Turkey has the following samples in service:

The Turkish Navy also signed an agreement with HDW on the joint production of six Type 214 submarines with an air-independent propulsion system. These submarines will be built jointly, but with the maximum amount of local equipment at the Gölcük Naval Shipyard. Turkey is trying to reduce its dependence on the United States and NATO partners in the production and operation of submarines. Ankara receives missiles, containers, test and auxiliary equipment, spare parts, technical documentation on Harpoon anti-ship missiles from Washington. The Pentagon trains Turkish naval personnel, provides technical support for the delivery of AGM-84L missiles and performs other tasks for the material support. 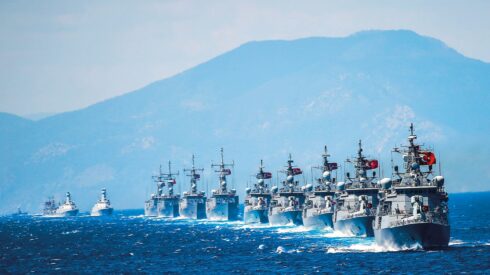 The Turkish command provides for the simultaneous operation of 13-14 units of submarines capable of delivering a torpedo or missile attack on the enemy at any time. Such a number of submarines will allow Ankara to fully control the Black Sea Straits and the entire Black Sea basin, as well as respond to challenges in the Mediterranean Sea.

The MEKO 200 class frigates are not designed for sea superiority. Frigates serve for defensive purposes. In addition, this type of frigates is technically outdated and needs to be replaced. 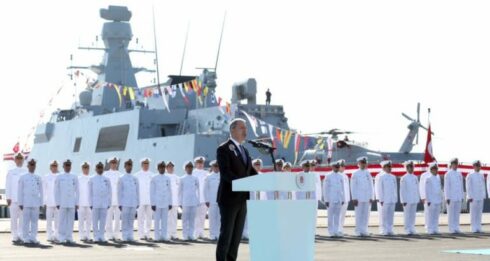 OTHER TYPES OF SHIPS

At the moment, the universal landing ship Anadolu is under construction. The ship has a displacement of 27.5 thousand tons. Initially, the ship was supposed to be an aircraft carrier with 12 F-35B aircraft. Due to Turkey’s withdrawal from the F-35 program, it is expected that the ship will be designed to carry helicopters and attack UAVs. Also, Turkey has moved towards the development of its own TF-2000 class destroyer. TF-2000 is an air defense destroyer that is currently being developed by the Turkish Naval Institute. The class will provide survivability in the presence of an air threat, as well as support mission functions such as command, control and communications, reconnaissance, early warning, surface warfare, anti-submarine warfare and electronic warfare. 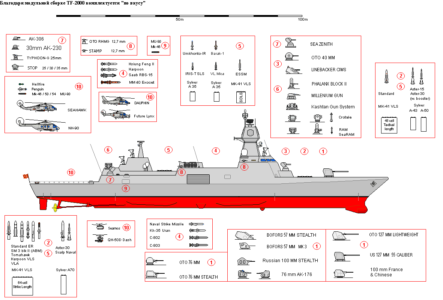 Turkey has a powerful navy on a regional scale. In the short term, these ships are enough to project their power in the waters. Taking into account the fact that no one in the Black Sea region is putting pressure on Turkey, all the main power is directed at the Mediterranean region. It is in this region that Turkey has begun the systematic implementation of the “Blue Homeland”.

Implementation of the “Blue Homeland” doctrine.

The doctrine’s special interest in the Mediterranean is connected with the complex of problems that Ankara has faced in the region:

– the wealth of energy resources of the Mediterranean shelf.

The first step towards the implementation of the doctrine was the signing of a Memorandum on the delimitation of maritime zones in the Mediterranean Sea between Turkey and Libya. As a result of this agreement, the Greek islands were deprived of the right to the continental shelf and the exclusive economic zone. Shortly after, Turkish vessels were sent to the disputed areas to conduct seismic surveys. Due to threats from Greece, as well as to demonstrate strength, each seismic vessel is accompanied by warships.

At the same time, Turkey held the largest naval exercises in the history of the country. The exercises were held in three seas at once: the Black, Aegean and Mediterranean. The entire naval and air force of the country was involved in the exercises. The symbolism of the name and the scale of the exercise clearly demonstrated Turkey’s readiness to defend its interests in the region by harsh methods. 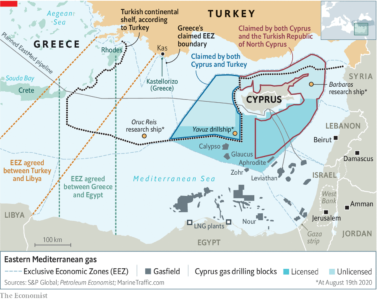 Turkey’s actions to implement the doctrine of the “Blue Motherland” are tough and expansionist in nature. Turkey proceeds from the understanding that no one will dare to open a conflict with it, so it behaves this way in the region. In the medium term, most of the ships will become technically obsolete and will not be able to provide the country’s defense capability. In the context of the crisis in relations with Western countries and the economic crisis in the country, Turkey has no opportunity to purchase new ships. The construction of its own ships is also impossible, Ankara does not have a technical base for this.

Based on this, it can be assumed that Turkey’s actions are not aimed at ensuring the country’s resource base. The “gas war” is just a cover for real purposes. Gas production from the Mediterranean shelf is currently unprofitable and will not bring any dividends to Turkey. In addition, Turkey does not have the technology to extract offshore gas in such difficult conditions. Turkey’s aggressive actions are primarily aimed at stopping all economic projects in which Turkey is not involved. Ankara creates conditions under which no issue in the region will be resolved without it.

Turkey has lost the ability to solve all problems alone. Given the difficult situation in the issue of armament renewal, we should expect Turkey’s actions to intensify in the space of the “Blue Homeland”. Ankara will go all-in to take the most advantageous position while it has the opportunity to do so. There are no states among the regional players that would respond to the challenge from Turkey. We see the emerging alliance of Greece and France, but so far it does not go beyond words.

France is good at words… the proffered a lot of them to Armenia as Turkey launched and managed both Turkish and Israeli drones… France is pathetically impotent with a Muslim invasion and a globalist nothing as a leader.

You can write your dream article, which is total crap. Just wait for the surprises.

What Turcophilic bs is this? Editors Choice? Are Editors now told to support Turkey on this site?

I must be blind as I couldn’t find the author of this piece.

What is with all the crap spam “work from home” ads in the comments? No one watching what is going on ?

Thank you, good article. Now, of course, no nation has the ability to solve problems “alone”, everything is interdependent. The question is, where does Turkey want to go on the long term, with its hard-power approach? E.g. in Syria but also seen in the building up of domestic defense industry. The latter is quite a feat and, as the article suggests, it might be that Turkey will be more active in the region to get its share via a more balanced hard-power / soft-power strategy.

“Going to war without France is like going hunting without an accordion” Norman Schwarzkopf, 1st gulf war, 1990

So, an open and clear imperialistic stance from Turkey, which shows it’s true colors. The Law of the Gunboat is back. Turkey obvsiously misses the Age of Colonization so much, even though it’s not the same state anymore as the Ottoman Empire (half of the people that were once part of the Empire, are not part of it anymore)… But, hey! Let’s call it Turkic Empire now! “Proclamation: All the lands from here to China, Crimea, Sudan, and half of the Aegean islands are now ours. Hell, all of the Med is our lake!” [Evil Laughter]…

And the funny thing is that there are people here who believe this is a serious, realistic claim. So what’s next? Try to bombard Athens because Turkey doesn’t like that Greek PM’s creepy face? Maybe send troops to the Pakistani-Chinese border to enforce Pan-Turkism? How about a Naval Base across Marseilles and plan the Invasion of Vienna 2.0 and Paris, to “free the captive Muslim populations”? It is a different thing to claim an Exclusive Economic Zone and fairly share the resources in the sea and a totally different thing to claim foreign lands from everybody, or claim that the EEZ is national waters and lands (not the same thing). I guess the people in AKP are so drunk from their self importance, palace schemes and everyday power trips, that they fail to see the difference.