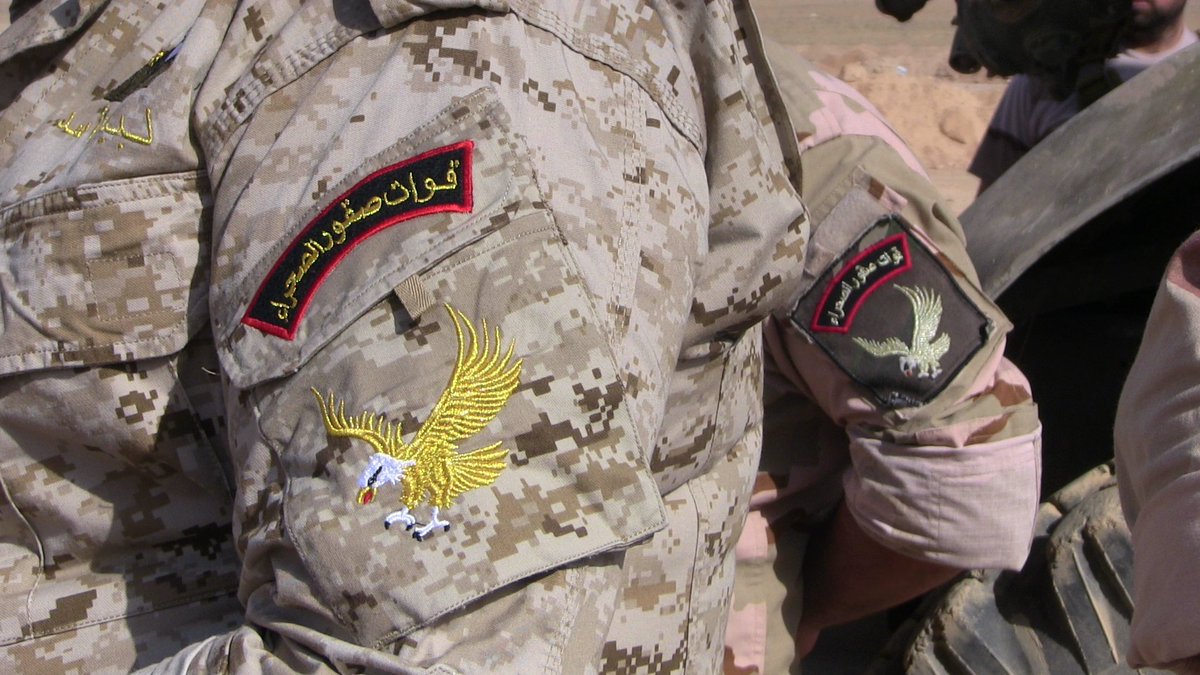 The Desert Hawks Brigade (or Liwa Suqur al-Sahara) was established in 2013 when Al-Qaeda’s presence in the Syrian-Iraqi deserts became a major threat. The force was established as a private security force to protect oil and gas wells in the Syrian desert from ISIS and Jabhat al-Nusra (now known as Hayat Tahrir al-Sham) terrorist groups. Legislative Decree № 55 allowing private companies to get government contracts to protect oil and petroleum infrastructure against militant attacks issued in August of the same year was the legal basis for the creation of the brigade. Decree № 55 was part of a broader government effort to boost security of the energy sector and to replenish the Syrian Arab Army’s manpower problem emerged as a result of desertions, conscription evasion and casualties after two years of the war.

Syrian businessman Ayman Jaber founded the Desert Hawks. He delegated its leadership to his brother Mohammad Jaber. Both businessmen had broad contacts in the energy, iron, steel and concrete industries in Syria. 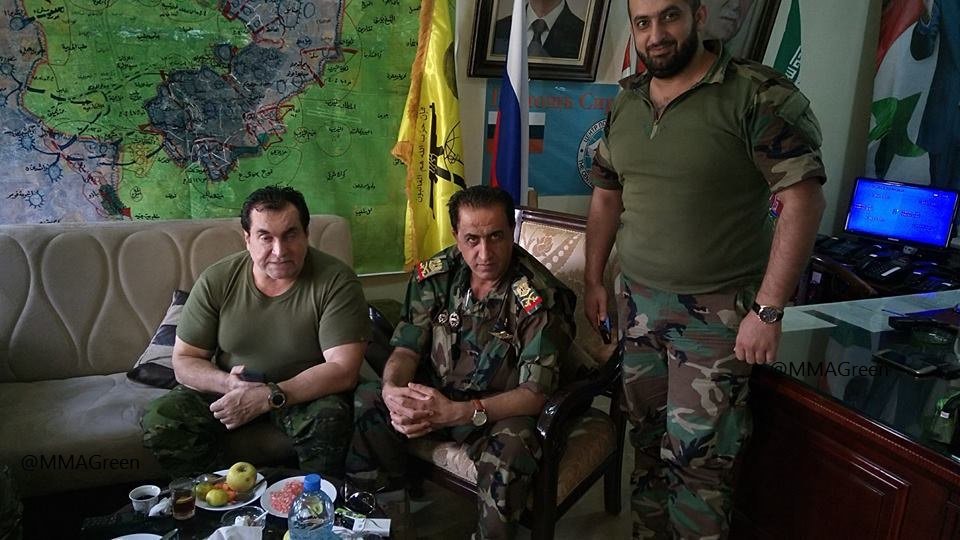 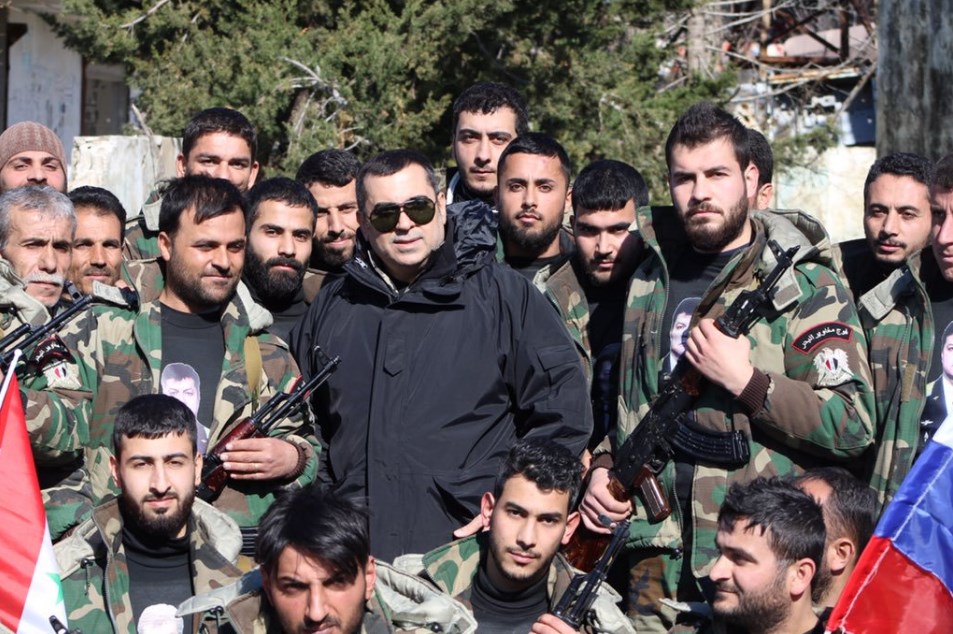 The Desert Hawks Brigade numbers about 5,000 fighters, most of whom are from Latakia and Homs. Former military officers and veterans and former members of other pro-government militias are a core of the Desert Hawks. They mainly own two bases: one is a part of the T4 Airbase while the other is in Jableh’s countryside. The majority of their financing comes from Ayman Jaber and the Ministry of Oil and Mineral Reserves, as well as the Syrian Ministry of Defense. The force is a part of the Syrian Military Intelligence, which directs their operations through a number of field commanders.

At the outset of 2013, the Desert Hawks launched two types of operations. The first of which was the protection of oil wells in the Syrian Desert between Deir Ezzor and Palmyra from continued attacks by ISIS and Jabhat al-Nusra. Those terrorist groups would launch dozens of attacks during as they focused on the Syrian oil and gas infrastructure. The second assignment of the Desert Hawks was ensuring the safety of the oil convoys during their passage between different oil wells and facilities in addition to their trips to Iraq and vice versa. Even with the loss of a number of oil wells, the Syrian economy was able to survive due to oil activity and trade in the Syrian Desert even with its crippled rate of production. The Iranian help also plays an important role in resolving the Syrian energy crisis.

By the end of 2013, and with the rise of ISIS as the main power in the Syrian Desert, the pressure increased exponentially on the Desert Hawks who were unable to protect many of Deir Ezzor’s important oil and gas fields. At the outset of the 2014, ISIS launched a major offensive in an attempt to capture all the Syrian oil and gas fields, however the Desert Hawks managed to successfully protect and recapture most of the wells that were lost in the previous year. The Al-Mahr fields, Jazal fields, Al-Sha’er fields, and Arak remained operational and productive even during late 2014 when ISIS was at thepeak of its power.

Following the success and experience accumulated from the battles they were engaged in and with the launch of the Russian intervention, the decision was taken to expand the Desert Hawks operational duties beyond protecting the oil wells to supporting offensive operations launched by the Syrian Armed Forces. At the same time, Russia began a massive armament and retraining operation at the beginning of 2016 to empower pro-government forces and bolster its number.

The Latakian countryside witnessed the first Desert Hawk participation in a non-desert operation. The Desert Hawks would support the newly formed Syrian Marines in capturing over 90% of Latakia’s northern countryside including the rebel strongholds of Salma, Kinsabba, and Rabi’ah.

Perhaps the largest of the Desert Hawks’ setbacks was the failed attempt at reaching Tabqa’s Military Airbase. After a swift advance that had them capture over 30 km of the Khanasser-Tabqa Highway, they were countered by a surprise ISIS offensive with dozens of VBIEDs leading to significant losses in equipment. Though, the unparalleled experience of the Desert Hawks fighters prevented an equally massive casualties count, as they were able to retreat with non-critical losses in the manpower.

As for their most significant contribution, it was their participation in Operation Dawn of Victory battle that liberated Syria’s largest city and industrial capital, Aleppo. The Desert Hawks helped the Syrian Army in repelling Jabhat al-Nusra’s and the Free Syrian Army’s joint offensive in southwestern Aleppo and re-enforced the siege through the Ramouseh district. The Desert Hawks would then repel countless assaults by Ahrar al-Sham and Jabhat al-Nusra during their second offensive on the city from the northern sector. In the end, fighters from the Desert Hawks played an important role in storming the remaining rebel-held districts in eastern Aleppo from the Sheikh Lutfi direction.

The Desert Hawks are considered some of the best military forces in the Syrian conflict as they operate a variety of vehicles. Some of them are locally enhanced by installing protective armors on pick-up trucks and adding 14.5, 23, or 57 mm guns.

The Desert Hawks’ anti-tank missile operators who use Konkurs ATGMs are some of the best gunners in Syria as they had proven their worth in the Latakia battles.

The group received a large number of advanced Russian weaponry and equipment throughout 2015 and 2016 when they were given a load of T72B1 and T-90 battle tanks before the start of the Battle for Aleppo in addition to BMP-2s. 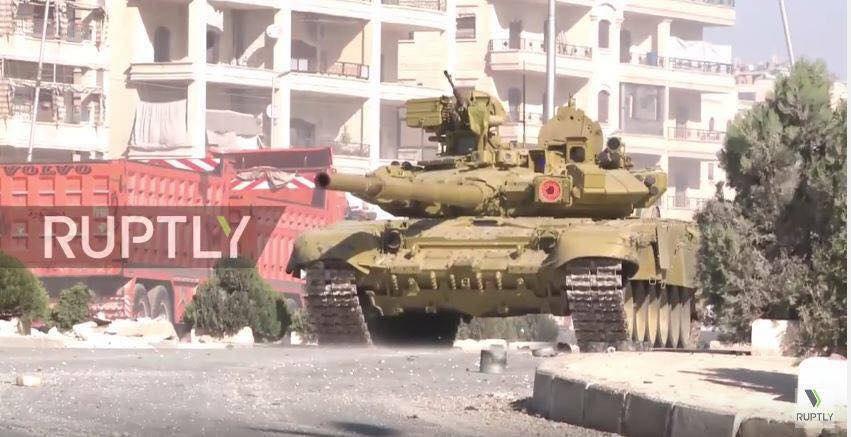 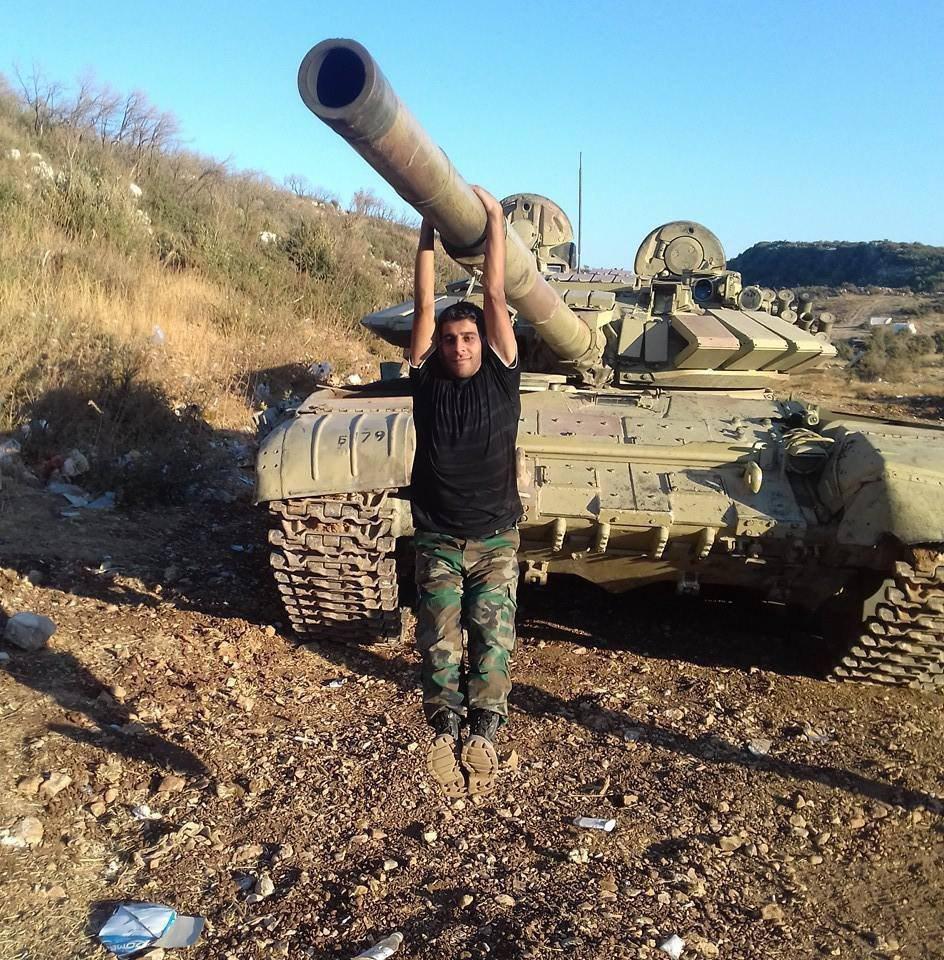 The Desert Hawks also use some multiple launch rocket systems, which mainly depend on locally manufactured heavy Burkan rockets. They are also the first forces that have started using small drones for reconnaissance tasks during the war. 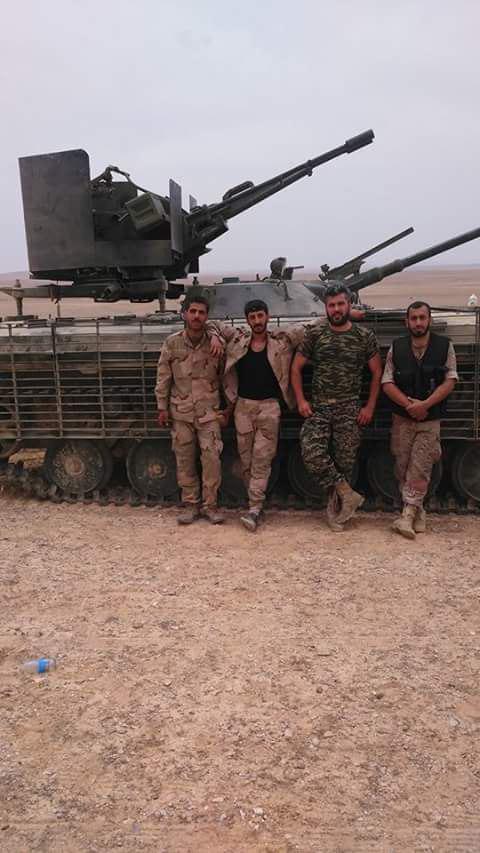 In battles in the desert, the Desert Hawks’ predominantly used mobile units with “technicals”, relying on speed and firepower. However, this approach was limiting their capabilities in holding ground. This is why the Desert Hawks were working jointly with Syrian Arab Army units during large-scale operations, receiving artillery and air support from them. During the advance on Palmyra, the group was also actively receiving support from the Russian Aerospace Forces and Special Operations Forces. 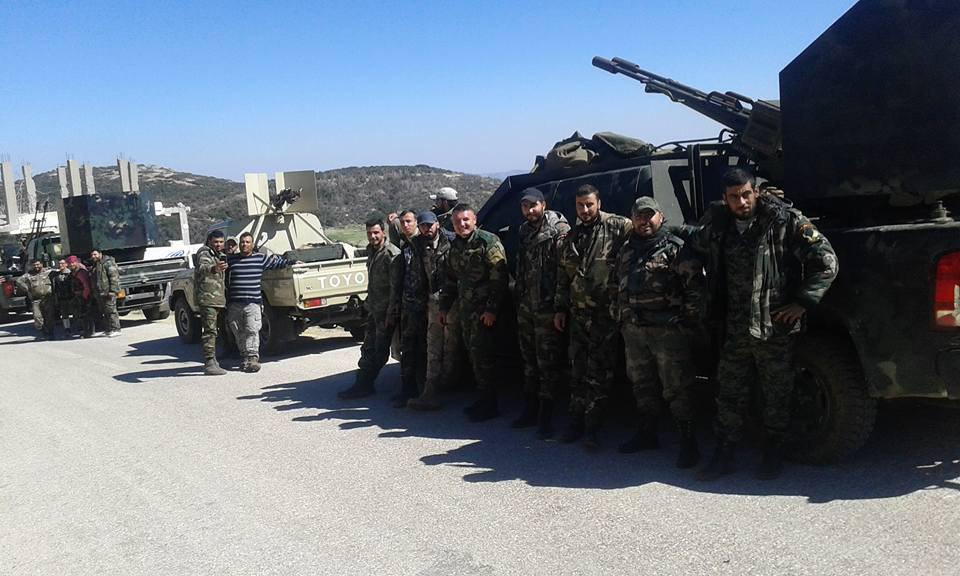 The Desert Hawks Brigade’ ability to operate in desert, mountainous and urban environments allowed to consider it as one of the most successful supporting forces to the Syrian Arab Army. The Desert Hawks’ rapid deployment capabilities were another reason the group’s success across Syria. The Desert Hawks attracted a large number of volunteers and achieved important victories in missions assigned to them in Latakia, Palmyra, and Aleppo. In the recent years, the Desert Hawks as well as the Tiger Forces and other elite formations were operating as a kind of armed fire brigades. They were rushing across Syria, putting out terrorist offensives and leading offensive operations in key areas.

In late 2016 and early 2017, the Desert Hawks Brigade disappeared from the media coverage of the war and its fighters were not actively involved in major operations like the second advance on Palmyra or the battle in northern Hama. Pre-conditions that have led to this situation are not clear. However, this took place on the background of formation of the Syrian Arab Army’s 5th Assault Corps, the move described by experts as a first step in a larger government effort to merge at least a part of semi-independent pro-government groups and to set up a joint command over them.

I have cheered for the Hawks and the Tigers in all their fantastic victories lately, but then last month I read a troubling piece in Der Spiegel where they are basically described as looters and warlords, and as a quick military fix that may cause real problems for the Assad government down the line.

The question is of course: Is this a smear-job, or is there any truth to it? The article sort of rings true, and the creation of the fifth assault corps could perhaps be seen as an effort to offset the influence of the private militias longer term. But what do I know? I have no sources on the ground.

MeMadMax
Reply to  Per Karlsson

Per Karlsson
Reply to  MeMadMax

I’ll chalk that up as a vote for smear-job.

I would assume their is a low level of truth to it. Example #1 A few isolated instances could have happened. #2 Sometimes opponents will dress as the enemy to do bad things and frame the other side (the terrorist could be doing this) #3 Their could have been an overly tough battle against a tribe where the population was scouting their lines are planting bombs as civilians, and the Syrian Tigers or Hawks lost some best friends to these cowardly act. And then in a war of attrition they robbed the civilians back.

These things happen on occasion. During the 2nd World War the red’s robbed everything they could. The Japs did similar things so did the English and so on. I am not agreeing with this at all, but I would just know that it happens on either a low level, or medium level, or large scale level. And if the Tigers and Hawks are doing it on a low level, then that is better then most armies are most of the time in multi-year long warfare anyway. Armies are professional when wars last less then two years. After that, wars of attrition become more commonplace.

The report by Spiegel may also be blown out of per-portion.

What’s up to all, it’s truly a pleasant for me to go to see this site, it consists of priceless Information.