Not everything in Europe is paralyzed by the anti-Covid lockdown: in fact, the mammoth annual exercise of the US Army, Defender-Europe, which until June mobilized on European territory, and beyond this, dozens of thousands of soldiers with thousands of tanks and other means, has been set in motion. The Defender-Europe 21 not only resumes the 2020 program, resized due to Covid, but amplifies it.

Why does the “Europe Defender” come from the other side of the Atlantic? The 30 NATO Foreign Ministers (Luigi Di Maio for Italy), who physically gathered in Brussels on March 23-24 explained: “Russia, with its aggressive behavior undermines and destabilizes its neighbors, and tries to interfere in the Balkan region.” A scenario constructed with the reality overturning technique: for example, by accusing Russia of trying to interfere in the Balkan region, where NATO “interfered” in 1999 by dropping, with 1,100 aircraft, 23,000 bombs, and missiles on Yugoslavia.

Faced with the Allies’ cry for help, the US Army comes to “defend Europe.” Defender-Europe 21, under the US Army Europe and Africa command, mobilizes 28,000 troops from the United States and 25 NATO allies and partners: they will conduct operations in over 30 training areas in 12 countries, including fire and missile exercises. The US Air Force and Navy will also participate.

In March, the transfer of thousands of soldiers and 1,200 armored vehicles and other heavy equipment from the United States to Europe began. They are landing in 13 airports and 4 European ports, including in Italy. In April, over 1,000 heavy equipment pieces will be transferred from three pre-positioned US Army depots – in Italy (probably Camp Darby), Germany, and the Netherlands – to various training areas in Europe, they will be transported by trucks, trains, and ships. In May, four major exercises will take place in 12 countries, including Italy. In one of the war games, more than 5,000 soldiers from 11 countries will spread across Europe for fire exercises.

While Italian and European citizens will still be prohibited to freely move for “security” reasons, this prohibition does not apply to the thousands of soldiers who will move from one European country to another freely. They will have the “Covid passport,” provided not by the EU but by the US Army, which guarantees that they are subjected to “strict Covid prevention and mitigation measures.”

The United States is not only coming to “defend Europe.” The large exercise – explained the US Army Europe and Africa in its statement – “demonstrates our ability to serve as a strategic security partner in the western Balkans and the Black Sea regions while sustaining our abilities in northern Europe, the Caucasus, Ukraine, and Africa” For this reason, Defender-Europe 21 “utilizes key ground and maritime routes bridging Europe, Asia, and Africa“.

The generous “Defender” does not forget Africa. In June, again within the framework of Defender-Europe 21, it will “defend” Tunisia, Morocco, and Senegal with a vast military operation from North Africa to West Africa, from the Mediterranean to the Atlantic. It will be directed by the US Army through the Southern Europe Task Force with its headquarters in Vicenza (North Italy). The official statement explains: “African Lion exercise is designed to counter malign activity in North Africa and Southern Europe and to defend the theater from adversary military aggression”. It does not specify who the “maleficents” are, but the reference to Russia and China is evident.

The “Defender of Europe” is not passing through here. The US Army V Corps participates in Defender-Europe 21. The V Corps, after being reactivated at Fort Knox (Kentucky), has established its advanced headquarters in Poznan (Poland), from where it will command operations along NATO’s Eastern flank. The new Security Forces assistance Brigades, US Army special units that train and lead NATO partner countries’ forces (such as Ukraine and Georgia) in military operations participate in the exercise.

Even if it is not known how much Defender-Europe 21 will cost, we citizens of the participating countries know we will pay the cost with our public money, while our resources to face the pandemic crisis are scarce. Italian military spending rose this year to 27.5 billion euros, that is 75 million euros a day. However, Italy has the satisfaction of participating in Defender-Europe 21 not only with its own armed forces but as a host country. It will therefore have the honor of hosting the final exercise of the US Command in June, with the participation of the US Army V Corps from Fort Knox. 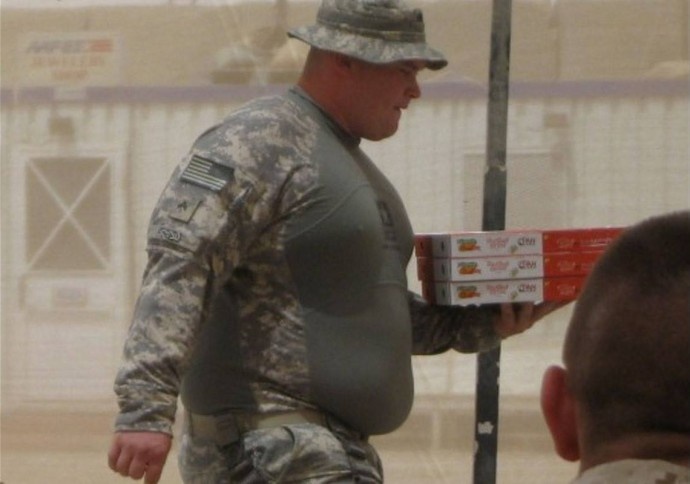 This one can eliminate the enemy by sitting on him

Don’t you believe in Health At Any Size movement?

That’s a militia boy in a shooting range but ok :)

Look at the bright side: all these countries will waste all their money and ammo, and when the new season of Ukraine-Donbass will start, they will not be able to take part even if they wanted to.

Kenny Jones ™
Reply to  He who laughs last laughs best

But nukes are scary man

“Defender Europe” catchy name for what’s essentially a self licking ice cream cone for the MIC. Can’t very well cut the F-35 program when the world is depending on US super heros to keep us safe from the Godless Asiatic communist hoards can we?

The US should be ‘Defending Europe’ from the real and unfolding Covid-19 epidemic/Info-epidemic instead of fictitious military threat in the distant future.

Europe should be defending the EU from the Americans and stop using it as a base to lodge provocations against other countries for if they don’t they will go bankrupt like the U,S,

This is of course not coincidence. NATOstani troops “exercising” in Ukranazistan will provide the perfect human shields for the Ukranazi invasion of the Donbass Republics.

“Europe Defender”? Now that’s funny! In the event of a war in Europe, the US will disappear real fast and wait in the background to see if or when they will jump in so they can claim victory.

Just in time to spread the pandemic which killed 80 million people. Then they blamed the Spanish for that, lol.

Hmm 28,000 that won’t even be a days work for the Russians so bring them on for Germany launched a couple of millions, and you know what happened to them they went underground and that’s where the 28,000 will go..

Bullies need to be stood up to or they’ll continue to bully smaller countries. Sometimes a costly war is better than a humiliating peace.
Up Ukraine!

Band Itkoitko
Reply to  The Objective

Up Syria, Armenia, Greece, Cyprus, Libya, Kurds against Turkey! You must resist the mad bully Erdogan! You see, this is one time we somewhat agree actually.

The Objective
Reply to  Band Itkoitko

LOL. Erdogan saved this countries through Allah’s help. the UN recognizes N-K as Azerbaijani territory, Libya has its democracy saved from Haftar, Syrians want to vote for who leads them, Kurds are out brothers, but there are the few bad ones among them trying to divide Turkey, Greece is claiming what’s not theirs.

What about Putin:
He helps the zionist dictator El-sisi, he helped another zionist dictator Haftar, he’s helping another dictator Assad, he is seizing land from others, he invaded Gerogia, he is in CAR, Sudan, and he is cosying up to oppressors like the MBZ and MBS, he’s also in N-K and Armenia, Belarus, and is currently contemplating a war with Ukraine.

There’s no doubt that Russia is an imperialistic country – probably even worse than the U.S. I thank God for the myriad of sanctions on them and I hope that more is in the pipelines for the Kremlin.

With that action in 1999, they’ve just get rid of theirs player, Milosevic, and it was a smokescreen for all those, who hated him. He was nasty witness, the man who destroyed SFRJ, real Yugoslavia, together with his Isetbegovic buddy.
Don’t want even mention that ustasha monster, even today there are fascist groups and meetings in that EU country.

28k is not enough, make it 280K so it can be effective. Israel alone has more than that.

Who cares about israel?

Your cannon fodder for the billionaires. Why accept that? You have been programmed to hate your neighbour, all to benefit a couple rich white dudes.

You can do better!

I hope this time when Italians are dropping like flies from Covid-19, the Russian, Chinese and Cubans don’t do a damm to help them… Ungrateful.

The only country the EU should be defending from is the evil empire head snake, the USA.