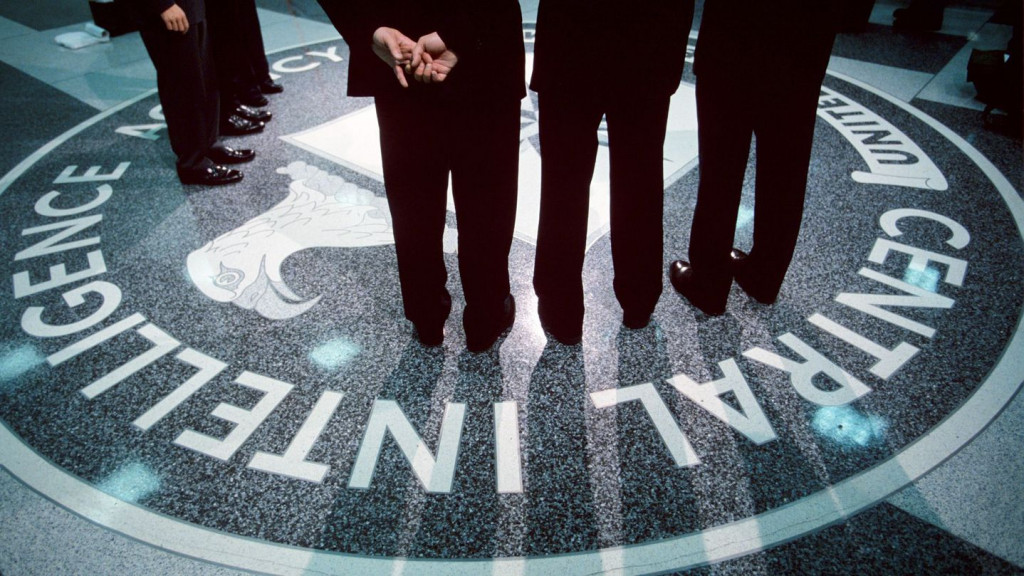 Written by Brad Hoff; Originally appeared at The Libertarian Institute

A newly declassified CIA document explored multiple scenarios of Syrian regime collapse at a time when Hafez al-Assad’s government was embroiled in a covert “dirty war” with Israel and the West, and in the midst of a diplomatic crisis which marked an unprecedented level of isolation for Syria.

The 24-page formerly classified memo entitled Syria: Scenarios of Dramatic Political Change was produced in July 1986, and had high level distribution within the Reagan administration and to agency directors, including presidential advisers, the National Security Council, and the US ambassador to Syria. 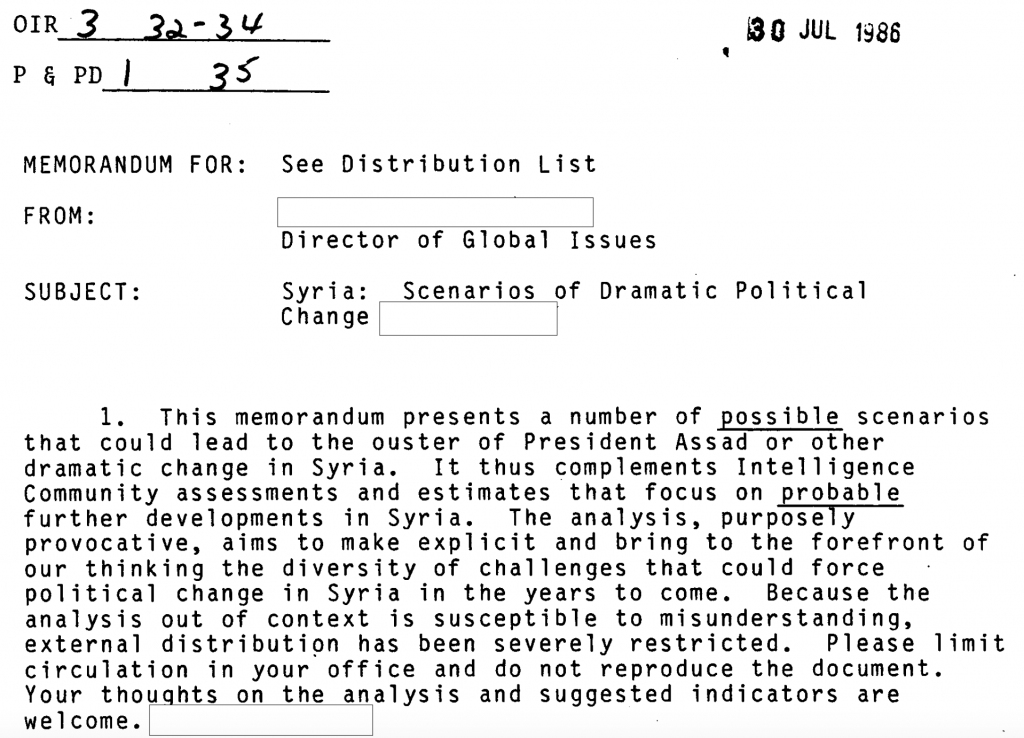 The memo’s cover letter, drafted by the CIA’s Director of Global Issues (the report itself was prepared by the division’s Foreign Subversion and Instability Center), introduces the purpose of presenting “a number of possible scenarios that could lead to the ouster of President Assad or other dramatic change in Syria.”

It further curiously warns that, “Because the analysis out of context is susceptible to misunderstanding, external distribution has been severely restricted.” The report’s narrowed distribution list (sent to specific named national security heads, not entire agencies) indicates that it was considered at the highest levels of the Reagan administration.

The coming sectarian war for Syria

The intelligence report’s contents contain some striking passages which seem remarkably consistent with events as they unfolded decades later at the start of the Syrian war in 2011:

Although we judge that fear of reprisals and organizational problems make a second Sunni challenge unlikely, an excessive government reaction to minor outbreaks of Sunni dissidence might trigger large-scale unrest. In most instances the regime would have the resources to crush a Sunni opposition movement, but we believe widespread violence among the populace could stimulate large numbers of Sunni officers and conscripts to desert or munity, setting the stage for civil war. [pg.2]

The “second Sunni challenge” is a reference to the Syrian government’s prior long running war against a Muslim Brotherhood insurgency which culminated in the 1982 Hama Massacre. While downplaying the nationalist and pluralistic composition of the ruling Ba’ath party, the report envisions a renewal and exploitation of sectarian fault lines pitting Syria’s Sunni population against its Alawite leadership:

Sunnis make up 60 percent of the Syrian officer corps but are concentrated in junior officer ranks; enlisted men are predominantly Sunni conscripts. We believe that a renewal of communal violence between Alawis and Sunnis could inspire Sunnis in the military to turn against the regime. [pg.12]

Regime change and the Muslim Brotherhood

The possibility of the Muslim Brotherhood spearheading another future armed insurgency leading to regime change is given extensive focus. While the document’s tone suggests this as a long term future scenario (especially considering the Brotherhood suffered overwhelming defeat and went completely underground in Syria by the mid-1980’s), it is considered one of the top three “most likely” drivers of regime change (the other scenarios include “Succession Power Struggle” and “Military Reverses Spark a Coup”).

The potential for revival of the Muslim Brotherhood’s “militant faction” is introduced in the following:

Although the Muslim Brotherhood’s suppression drastically reduced armed dissidence, we judge a significant potential still exists for another Sunni opposition movement. In part the Brotherhood’s role was to exploit and orchestrate opposition activity by other organized groups… These groups still exist, and under proper leadership they could coalesce into a large movement… …young professionals who formed the base of support for the militant faction of the Muslim Brotherhood; and remnants of the Brotherhood itself who could become leaders in a new Sunni opposition movement… [pp.13-14]

The Brotherhood’s role is seen as escalating the potential for initially small Sunni protest movements to morph into violent sectarian civil war:

Sunni dissidence has been minimal since Assad crushed the Muslim Brotherhood in the early 1980s, but deep-seated tensions remain–keeping alive the potential for minor incidents to grow into major flareups of communal violence… Excessive government force in quelling such disturbances might be seen by Sunnis as evidence of a government vendetta against all Sunnis, precipitating even larger protests by other Sunni groups…

Mistaking the new protests as a resurgence of the Muslim Brotherhood, the government would step up its use of force and launch violent attacks on a broad spectrum of Sunni community leaders as well as on those engaged in protests. Regime efforts to restore order would founder if government violence against protestors inspired broad-based communal violence between Alawis and Sunnis. [pp.19-20]

The CIA report describes the final phase of an evolving sectarian war which witnesses the influx of fighters and weapons from neighboring countries. Consistent with a 1983 secret report that called for a US covert operation to utilize then US-allied Iraq as a base of attack on Syria, the 1986 analysis says, “Iraq might supply them with sufficient weapons to launch a civil war”:

A general campaign of Alawi violence against Sunnis might push even moderate Sunnis to join the opposition. Remnants of the Muslim Brotherhood–some returning from exile in Iraq–could provide a core of leadership for the movement. Although the regime has the resources to crush such a venture, we believe brutal attacks on Sunni civilians might prompt large numbers of Sunni officers and conscripts to desert or stage mutinies in support of dissidents, and Iraq might supply them with sufficient weapons to launch a civil war. [pp.20-21]

While the document is primarily a theoretical exploration projecting scenarios of Syrian regime weakening and collapse (its purpose is analysis and not necessarily policy), the authors admit of its “purposefully provocative” nature (see PREFACE) and closes with a list desired outcomes. One provocative outcome describes a pliant “Sunni regime” serving US economic interests:

In our view, US interests would be best served by a Sunni regime controlled by business-oriented moderates. Business moderates would see a strong need for Western aid and investment to build Syria’s private economy, thus opening the way for stronger ties to Western governments. [pg. 24]

Ironically, the Syrian government would accuse the United States and its allies of covert subversion within Syria after a string of domestic bombings created diplomatic tensions during the mid-1980’s.

Dirty tricks and diplomacy in the 1980’s

According to Patrick Seale’s landmark book, Asad of Syria: The Struggle for the Middle East, 1986 was a year that marked Syria’s greatest isolation among world powers as multiple diplomatic crises and terror events put Syria more and more out in the cold.

The year included “the Hindawi affair”—a Syrian intelligence sponsored attempt to hijack and bomb an El Al flight to Tel Aviv—and may or may not have involved Nezar Hindawi working as a double agent on behalf of Israel. The foiled plot brought down international condemnation on Syria and lives on as one of the more famous and bizarre terror conspiracies in history. Not only were Syria and Israel once again generally on the brink of war in 1986, but a string of “dirty tricks” tactics were being utilized by Syria and its regional enemies to shape diplomatic outcomes primarily in Lebanon and Jordan.

In March and April of 1986 (months prior to the distribution of the CIA memo), a string of still largely unexplained car bombs rocked Damascus and at least 5 towns throughout Syria, leaving over 200 civilians dead in the most significant wave of attacks since the earlier ’79-’82 war with the Muslim Brotherhood (also see BBC News recount the attacks).

Patrick Seale’s book speculates of the bombings that, “It may not have been unconnected that in late 1985 the NSC’s Colonel Oliver North and Amiram Nir, Peres’s counter-terrorism expert, set up a dirty tricks outfit to strike back at the alleged sponsors of Middle East terrorism.”*

The casual reader of Syria: Scenarios of Dramatic Political Change will immediately recognize a strategic thinking on Syria that looks much the same as what is revealed in national security memos produced decades later in the run up to the current war in Syria.

When US cables or intelligence papers talk regime change in Syria they usually strategize in terms of exploiting sectarian fault lines. In a sense, this is the US national security bureaucracy’s fall-back approach to Syria.

One well-known example is contained in a December 2006 State Dept. cable sent from the US embassy in Syria (subsequently released by WikiLeaks). The cable’s stated purpose is to explore Syrian regime vulnerabilities and weaknesses to exploit (in similar fashion to the 1986 CIA memo):

PLAY ON SUNNI FEARS OF IRANIAN INFLUENCE: There are fears in Syria that the Iranians are active in both Shia proselytizing and conversion of, mostly poor, Sunnis. Though often exaggerated, such fears reflect an element of the Sunni community in Syria that is increasingly upset by and focused on the spread of Iranian influence in their country through activities ranging from mosque construction to business.

Another section of the 2006 cable explains precisely the same scenario laid out in the 1986 memo in describing the increased “possibility of a self-defeating over-reaction” on the part of the regime.:

ENCOURAGE RUMORS AND SIGNALS OF EXTERNAL PLOTTING: The regime is intensely sensitive to rumors about coup-plotting and restlessness in the security services and military. Regional allies like Egypt and Saudi Arabia should be encouraged to meet with figures like [former Vice President Abdul Halim] Khaddam and [younger brother of Hafez] Rif’at Asad as a way of sending such signals, with appropriate leaking of the meetings afterwards. This again touches on this insular regime’s paranoia and increases the possibility of a self-defeating over-reaction.

And ironically, Rif’at Asad and Khaddam are both mentioned extensively in the 1986 memo as key players during a speculative future “Succession Power Struggle.” [p.15]

An Islamic State in Damascus?

While the 1986 CIA report makes a case in its concluding paragraph for “a Sunni regime controlled by business-oriented moderates” in Syria, the authors acknowledge that the collapse of the Ba’ath state could actually usher in the worst of all possible outcomes for Washington and the region: “religious zealots” might seek to establish “an Islamic Republic”. The words take on a new and special importance now, after the rise of ISIS:

Although Syria’s secular traditions would make it extremely difficult for religious zealots to establish an Islamic Republic, should they succeed they would likely deepen hostilities with Israel and provide support and sanctuary to terrorists groups. [pg.24]

What continues to unfold in Syria has apparently surpassed even the worst case scenarios of intelligence planners in the 1980’s. Tinkering with regime change has proven itself to be the most dangerous of all games.

So, the stupid, ignorant, war-mongering USA has opened Pandora’s box and if anything, it looks like it has back fired on the US. I am no military strategist but for me Russia and Iran need to put every effort into Syria, then consolidate it + then (if asked) assist in Iraq, whilst at the same time be part of the new alliance talking about intervening in Afghanistan, again if asked.

Syria must be completed first and consolidated.

PS China need’s to get involved.

The civil war was bound to happen no matter what happened or backed it, (Too many people and not water drought were some of the real causes for it) if there was no Iraq war in 2003, Saddam might of backed it or facing same challenges like Mubrak did, who knows really? What if scenarios. Water wars will be coming soon in parts of the world where water is already hard to find.

This could be true,but if USA and etc stopped backing the rebels years ago the war would have ended

I agree with that it would be long over.

Would it have ever have started ?.

For me people say it is about the oil pipelines (Which is probably a major side issue) but I think we are already in the water wars. Watch that damn fall.