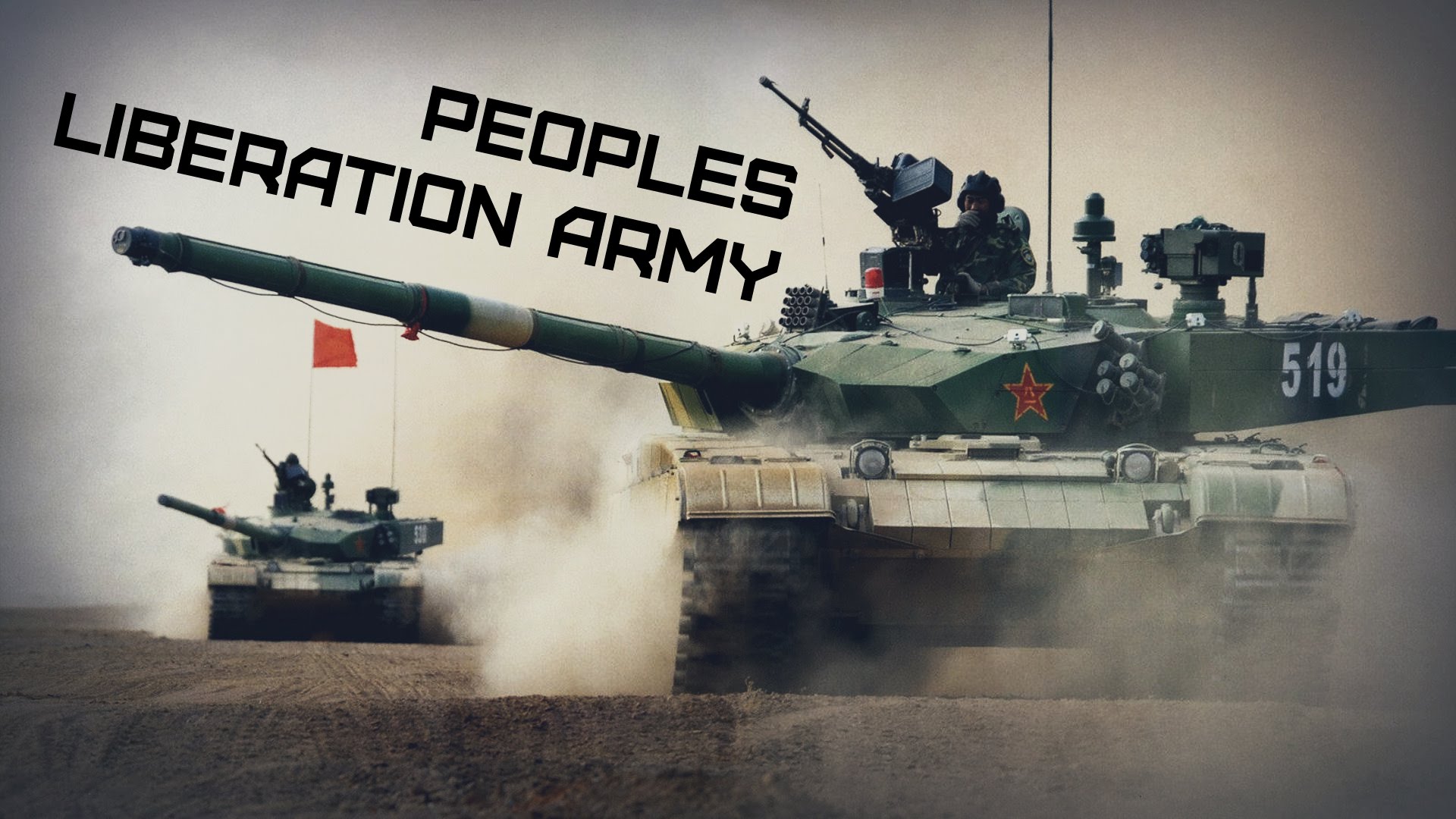 Throughout its 80 year existence, units of the People’s Liberation Army (PLA) have conducted military training in accordance with requirements and attitudes that were learned during the Soviet-Chinese friendship. The evolution in arms and military equipment has caused a change in tactics.

Officers of the Department of Combat Training of General Staff of the PLA are regularly making adjustments in their plans for combat training, and are improving the grounds, shooting ranges and other areas of training. The new approaches to training were mainly learned from the Russian Federation and the United States through military intelligence and efforts made by analytical units. The modern armed forces of the Chinese military, has therefore adopted the concepts of polygon cross-training (PCT) and unannounced inspections.

In mid-May, a competition was held titled ‘Central Steel Fist of Steel – Riders and Tanks’. According to the plan of combat training for tank and infantry fighting vehicle crews for the PCTs, it is a copy of the Russian tank biathlon. The final part of the competition was attended by 10 crew leaders based on the results of qualifying competitions in the 1st, 27th, 31st, 38th and 54th combined-arms armies of the People’s Liberation Army Ground Force (PLAGF).

The track length of the Chinese tank biathlon is 21 kilometers (km) for singles and 16 km for pairs. Eight types of obstacles and 24 targets were created on the track. The crew is obliged to conduct reconnaissance over 3 km of trails with the aim of identifying suspected enemy forces.

The competition for the infantry units of the PCT in Chzhuzhihe, was named ‘Kuayue’ (‘Breakthrough’). These competitions have been held since 2009. The training ground is the best equipped among similar training sites. Chzhuzhihe has a railway station suited for trains with 20 carriages. One of the requirements in the competition is to measure execution time when unloading equipment. Some units which are transferred to the training ground from places of permanent deployment come from distances as far as 4 500 km away.

Analysis of photo and video materials shows that the site allows one to place multi-storey barracks for units with up to 10 000 people in the parks as well as 1 000 armored vehicles. In addition, the training ground created six blocks of simulated residential buildings, typical of settlements in China, as well as an exact copy of a quarter of government buildings in the capital of Taiwan, Taipei. The power supply to the polygon is provided by a network of wind generators, which are installed at a considerable distance from the target areas.

Acting as enemy forces are the Chzhuzhihe 195th division of the 13th mechanised infantry brigade, of the PLAGF, which is equipped with upgraded versions of 59-, 69- and 96-type tanks, infantry fighting vehicles and 89-type anti-tank guns. According to estimates of the Chinese military, the 195th division defeats the ‘red’ forces in 95% of the cases because it uses the tactics of highly-mobile ‘Stryker’ brigades of the United States army and some of the techniques that have been adapted by monitoring surprise inspections of combat readiness of the Russian Ground Force. Operations like ‘Breakthrough’ are also happening at the Queshan, Santsze and Guangming training grounds.

During ‘Breakthrough’, a three-day gathering of divisional- and brigade-level army commanders was held in Chzhuzhihe. A large-scale demonstration of action on the area layout and analysis of problematic aspects in practical deployment were provided.

Exercises  of the PLAGF mechanised artillery brigades were named ‘Fire-Power’ and are carried out in five stages. According to Chinese media reports, artillerists from the 21st, 31st, 39th, 41st and 54th armies are involved in these maneuvers now in collaboration with an unknown polygon from divisions of electronic warfare, air defense and medical staff of military hospitals. Some units are transferred from the places of permanent deployment 2 500 km away.

The PCT in Tsintunsya is located in a mountain area at an altitude ranging from 1 300 metres (m) to 3 000 m above sea level. Acting as the enemy soldiers are the 47th, 55th and 56th mountain infantry brigades. Altitude conditions are facilitated for them, as the soldiers are used to speed-training bases at altitudes ranging from 4 500 m to 6 200 m.

Power and reliability data is collected from armoured vehicles and similar units during the action in the highlands. Usually, the mountain infantry units of the PLA use a tactic called ‘Two Peaks’ when the Mi-171 helicopters of army aviation airlift personnel and light weapons for two passes from the enemy’s position.

A series of exercises under the name ‘Shandan Firepower’ have been developed in order to check the combat training and coordination of the PLAGF air defense units. The Shandan polygon includes three test areas, the training base and the combined tactical training centre. 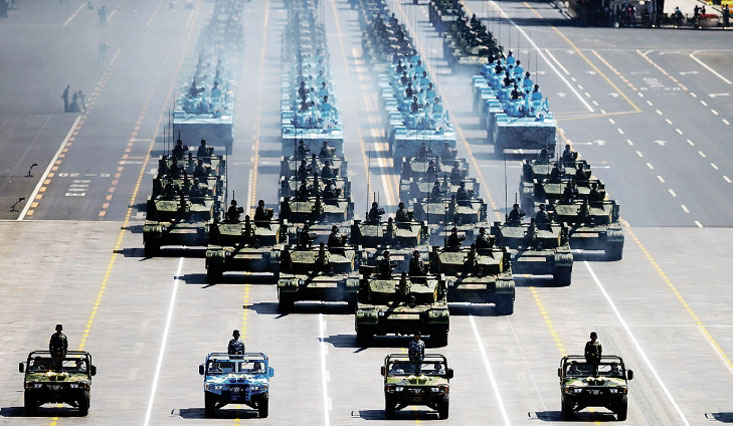 Integrated brigades of air defense soldiers, who are armed with anti-aircraft missile and missile-gun complexes of Russian and Chinese origin, are required to prevent a ‘breakthrough’ of the borders by the ‘enemy’s’ air forces, the role of which is carried out by the 2nd fighter air division of the air force, named ‘South Tyrant’ and the aerobatic teams: ‘Red Falcons’, ‘Wings of Heaven’ and ‘the First of August’.

According to sources, ‘South Tyrant’ is the basic unit acting as a potential enemy. The service division consists of fighters ‘Jian-11B‘,‘Jian-7E‘,‘Su-27 SK‘ and ‘Su-30МКК’, which apply camouflage patterns typical of the air forces in the US, Vietnam, India and Japan. Most of the aircraft is located at bases in the cities of Chzhane and Wuwei.

Pilots of the squadrons in this division use tactics from the arsenal of the pilots of the abovenamed countries and carry out radio communication only in English, Vietnamese, Indian and Japanese. Information about the training of fighter aircraft pilots in potential enemy countries is applied as learned through channels of military intelligence and through the friendly air force exercises carried out between China and Pakistan.

There are four units with modern radioelectronic warfare systems to create a complex electromagnetic environment against the ‘red’ forces on the ground.

Only stealth and surprise responses can counter air operations by the units of the ground defense. This result is achieved by using camouflage coating on difficult terrains, such as the terrain of the training ground at the Helan Mountain ridge.

Tanks don’t climb in the dirt

To check the combat readiness of troops and equipment of the armored units of the PLAGF to the PCT in Chzhuzhihe uses mechanised exercises called ‘Central Sharp Sword’. This PCT (established in 1999 and modernised in 2007), uses about 400 electronic targets in eight directions and more than 1 000 moving targets of various sizes. 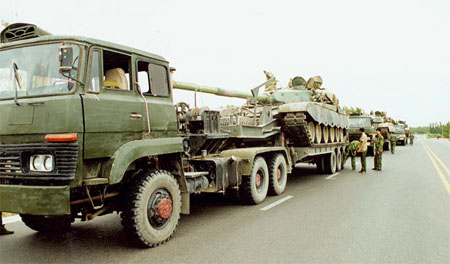 To increase the speed of movement of the armored vehicles and reduce material fatigue in the PLA, armored trucks with 6×6 and 8×8 wheel drive have been used since the 70s. These special vehicles are produced by Tai’an (make: TA; models 4360, 4410 and 5570А) and Wuhan (make: ‘Hanyang’; model HY473AS).

According to news agencies, during the exercise, the ‘red’ armored forces made dashes of 380 km distances on muddy ground after flooding and heavy rains on the roads of the training area, which indicates an increase in the reliability of the Chinese equipment. The equipment was previously unable to overcome more than 250 km without serious damage and failure of mechanical parts.

The PCTs in Tsintunsya and Guangming were used for unit exercises for the 164th brigade of the marines of the PLA Navy during the 2015 autumn-winter period. Winter study (January to February) is designed to give the marines the opportunity to train on unfamiliar terrain, which is very different from the coastline of the southern provinces of China. By 2016, the commanders of the marine corps had taken into account the shortcomings of the standard camouflage (blue-white) coloring and last winter, floating armored vehicles and assault guns were painted in a sand-white color or were covered with full-size cases with mounts to incorporate elements of local vegetation.

Training marines in mountainous and forest terrains is organised at the training centre in Maluna, located in the same County of Yunnan Province. Until 2015, it served as a shooting practice area. However, the combat training of troops of the general staff of the PLA approved a plan for the modernisation and expansion of the site. As a result of a clearing of the area in several directions, new target areas were created.

Analysts at the Department of Combat Training of Troops of the joint operations headquarters, under the Central Military Council of the Communist Party of China, carried out an analysis of each episode of the exercises directly when they ended by assessing the ‘red’ and ‘blue’ forces. A detailed assessment was then carried out within two months. Also examined were the final results and impact indicators, such as ensuring security during the transfer of units (the railroad and composition of the convoys). One of the 16 special forces of the PLA was the role of subversive groups of forces of the probable enemy. After the completion of all the training events of the spring-summer period, pilot maneuvers involved two teams with proposed new tactics.

In 2015, the divisions acting as the possible enemy defeated the ‘red’ forces at almost all the stages. This outcome meant a very low level in the commanders’ training abilities. The results of 2016 (the ‘red’ forces overcame the ‘blue’ ones in 50% of the exercises) showed that the administration of the PLA has taken steps aimed at improving the quality of combat training.

Good to know China is modernizing its tactics and training as well as its equipment. That means not only Russia is helping the world towards multipolarity but China as well. The faster and more thoroughly the dc crooks and their enablers and counterbalanced and reigned in the better. India is getting stronger as well it seems but I’m not sure who they’d ally with if a peer to peer shooting war starts.