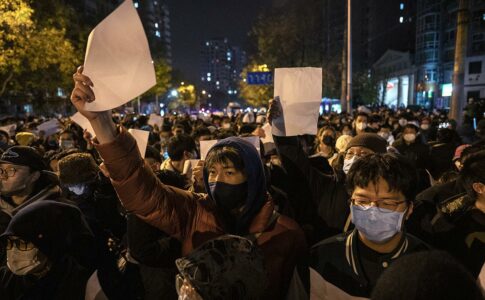 In the two years since the World Health Organisation declared the beginning of the COVID-19 ‘Pandemic’, anti-lockdown protests around the world have been routinely demonised by corporate media outlets.

Regularly lambasted as being ‘organised by the far-right’ and ‘super-spreader’ events, protests against lockdowns and vaccine mandates have also drawn a brutal state response in a number of Western countries, including Germany, Holland, and perhaps most notably, Canada.

In January 2022, following Ottawa’s decision to impose a vaccine mandate on truck drivers re-entering the country from the US, the world’s largest land border and a vital component of the Canadian economy, a nationwide Freedom Convoy would commence in the second largest country on the planet.

In response, the government of Justin Trudeau – previously mooted by the World Economic Forum as one of its ‘Young Global Leaders’ – would respond in an authoritarian fashion, freezing the bank accounts of protest organisers and attacking demonstrators using mounted Horses and teargas canisters.

Therefore, onlookers were bemused this week by Trudeau’s declaration of support for anti-lockdown protesters in China, currently demonstrating against Beijing’s ‘zero-Covid’ policy.

Indeed this was a view echoed by the western media in lockstep, less than a year after the same outlets were condemning European and American demonstrators for carrying out the exact same actions.

To understand the sudden change in attitude towards anti-lockdown campaigners by the corporate press, one must first look at other events that also occurred in January of this year.

During the same week as the World Economic Forum’s virtual Davos Agenda event, the two-year ‘Pandemic’ narrative collapsed almost instantaneously in multiple western countries including Ireland and Britain. The WHO, a body with a known record of corruption and ties to pharmaceutical giants, would also call for the ending of all travel restrictions during the same period.

In further coincidental timing, a week after the Davos event, Hungarian business magnate and Open Society founder George Soros would give a speech to the Hoover Institution in the United States, outlining his view of CCP Chairman Xi Jinping as being the ‘greatest threat that open societies face today’ and predicted that widespread opposition to the Chinese leader’s ‘zero-Covid’ policy would eventually lead to his removal from office. It would be a view that Soros would again express during his address of the World Economic Forum’s Davos summit in May of this year, and indeed, it is a situation that is now playing out in real time.

On the 24th of November, minor anti-lockdown protests that had begun at the start of the month following the decision by the southern Chinese city of Guangzhou to re-impose restrictions, would grow exponentially in the aftermath of an apartment fire in the north-western Xinjiang province, leading to the deaths of ten residents, with lockdown restrictions being blamed on preventing firefighters from reaching the scene.

In classic colour revolution style, the ‘A4 Revolution’ has been given coordinated sympathetic coverage by the mainstream media, similar to the 2013 Euromaidan Ukrainian regime change operation, in which the Open Society Foundations also played a key role. What has been given less coverage however, is the decision by Chinese authorities to listen to the legitimate grievances of anti-lockdown protesters and subsequently remove restrictions in Guangzhou and the city of Chongqing, the focus shifting to the wider demand for the removal of Xi Jinping’s leadership instead.

Indeed, this was echoed in an article supportive of the protests by the National Endowment for Democracy, a Reagan-era Neoconservative foundation that effectively acts as a privatised version of the CIA, fomenting regime change from Libya, to Belarus, and now, using anti-lockdown protests that would have been widely condemned less than a year ago, China.

Couldn’t happen to a nicer bunch of cockroaches after their Leaders did this https://www.911research.wtc7.net/wtc/groundzero/cleanup.html

And a “fond” Farewell to $atan’s Zi0ni$t child https://www.zerohedge.com/geopolitical/former-chinese-president-jiang-zemin-who-ruled-after-tiananmen-massacre-dies-96 going to the great beyond to burn in Hell for his “role” in September 11, 2001.

May the Devil pi$$ on his bones for all eternity along with Vajpayee, G.H.W. Bush and the extended family that belongs to each of them.

there was no tiamen square massacre you absolute cattle. The chilean embassy lies right on the square, and none of their papers of what happened that day details any massacre. It was all a proto-colour revolution type event. Intentionally missreported in western media to create anti-party sentiment.

Because the party had completely abandoned mao and “communism” by that time. And was rapidly turning toward its current social nationalist incarnation. And nationalism, be it in russia serbia or china, is the one thing the global regime won’t tolerate.

I didn’t write the article zerohedge did that is still part of that same narrative. To the bigger and more important event that saw China haul away the crime scene in lower Manhattan 21 years ago in exchange for American manufacturing labor that also saw China’s hand out in the exploitation of Afghanistan and oil from Iraq!… They are America’s and I$rael’s best friend!…

And if you think they have Russia’s back… Why haven’t they abdicated the UN “thrown” after 8 years of Ukraine’s assault by tendering their resignation along with India to tell the rest of the cherished lemmings in the “peanut gallery” that an attack on the Russian Federation is an attack on China and India!…

Let me know when that happens!

Verified reports that many protesters were from HK and that the going rate per protester was up to $1000 per person.

Sympomatic: all protesting against lockdowns but all wearing masks……..

Trouble in communist paradise? Shocking! Hey, I know, just blame those darned Americans. It’s actually quite convenient that they happen to be on the other side of the planet. Wouldn’t you say?

Those darned americans are all over the place…..like a cancer

Trudeau is a traiter in Canada.

Even if we want to admit it or not, the Chinese and some other anti-Western states did the same thing with what Canada or UK did. George Soros, neolibs and neocons are bad, however, the people have every right to demonstrate for their freedom.