Washington and Brussels are preparing to “save” the world from Russia – again – in spite of a signed convention. 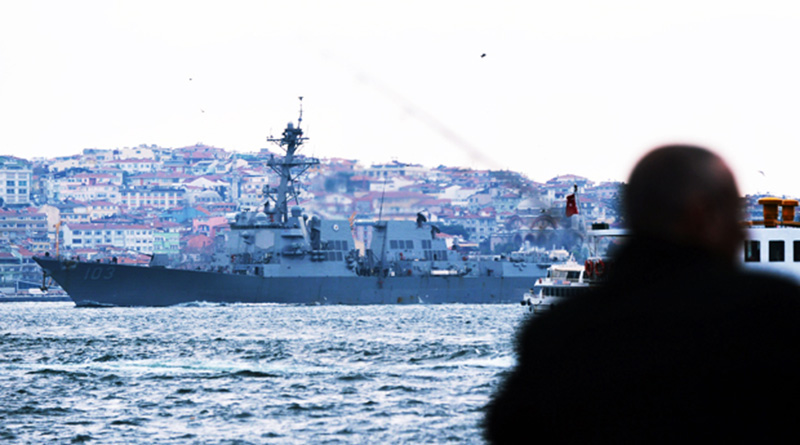 Last week, the Deputy Secretary General of NATO Alexander Vershbow visited Romania, where he met with the country’s minister of defense Mihnea Motoc. At a glance, it would appear as a usual protocol meeting, assuming the boring rhetoric of “parquet statements”. Yet, one statement- I dare to suggest – should be given maximum attention to from our military commanders.

To quote: “Here in the Black Sea region, the allies should consider a more persistent NATO military presence in the region – with a particular focus on our maritime capabilities – a presence which is robust, but also defensive in posture, and in compliance with the Montreux Convention… “. What is all that about? As you have guessed, it has to do with Russia, of course. To quote further: “We must and we will strengthen our defenses and forces of deterrence, so that Russia or any other potential enemy would not even think about initiating any sort of aggression towards a NATO member. At the same time we will continue to engage in dialogue with Russia, in order to solve problems through communication, restore transparency in the military field, and thereby reduce the risk of conflict. ”

Apparently, “strengthening military presence” is something that NATO needs to do….

It is the sacred right of any high-ranking military official to suffer from mild to extreme paranoia. Just how bad this condition could be for the Permanent General Secretary Vershbow of NATO, is a whole other issue. Yet, this gentleman was referring in his remarks to the “Montreux Convention,” which, in his opinion, did not prevent the plan to be another act of humanism. Hence, it is appropriate to address this important historical document, to understand the level of wickedness this high military official has reached.

Thus, the mentioned international treaty was signed in the summer of 1936 in the Swiss town of Montreux between the Soviet Union, Turkey, Australia, Bulgaria, Great Britain, Greece, Romania, France, Yugoslavia and Japan. The parties agreed to the restoration of the sovereignty of Turkey over the Bosporus and the Dardanelles, which connect the Black Sea with the oceans. The new provisions provide Ankara control over the passage of all types of ships in the Black Sea, while warships of non-Black Sea nations, are subject to substantial and fundamental limitations.

In particular, according to the document, non-Black Sea Powers may send into the Black Sea only small-tonnage ships and stay for no longer than three weeks. In the case of a war in which Turkey itself does not participate, it has the right to forbid passage through the straits for any of the conflicting parties. On the other hand, if Turkey itself would take part in the conflict or concludes that it is being threatened, it will have the right to allow the passage of any warship without restrictions.

Perhaps, Mr. Vershbow was referring precisely to the current, delicately said, “easy folding” of the Russian-Turkish relations. But these predictions do not and cant justify any such planned actions from NATO. Moscow has repeatedly stressed that Ankara officials should just admit that they wronged Russia in downing its Su-24. Back then it was not apparent  that these untrustworthy warriors, are always ready for war.

In anyway, the likely threat posed by Russia in relation to other members of the Alliance, especially Ukraine and Georgia, as is claimed according to the letter of the contract, should not act as basis for the Turks to let American destroyers in the Black Sea. We should not forget that, unfortunately, the Pentagon acts upon the banal idiom “if it is impossible, yet desirable – it becomes possible”.

In particular, in 2008, during the conflict in South Ossetia, USS graciously crossed the straits and entered the Black Sea. This displacement of the vessel exceeded the maximum threshold. This led to Moscow’s discontent given our peccadillo to honor the norms adopted by international treaties. Already, and most recently, in the winter of 2014, we were unhappy with the presence of the American frigate “Taylor”, which “went through” to oversee the situation in relation to the unfolding events in Crimea. With the displacement of the ship when issues have arisen, instead of 21 days, the ship was there for more than a month.

What is there to stop them?

There were no deterrent consequences following Washington’s actions in the Black Sea. This is why Russia has to start to worry. Especially that, Vershbow’s proposal to strengthen the NATO contingent in the Black Sea ceases to be just a figure of speech. It might not be apparent in the Romanian Navy ‘s correspondence that, strengthening NATO forces is at the expense of US Navy ships. These ships would enter the sea in any quantity without Russia’s prior knowledge. This could involve a possible Turkish military threat (Erdogan proved himself as man not to be trusted due to Ankara’s actions in the past weeks and months ), also, they might totally forget about the convention. They might even do as they please without any formal notification for the Turkish military authorities. Is the validity of the convention going to last much? Its durability remains questionable.

If NATO goes for a more persistent NATO military presence in the Black Sea region, then Russia should do the same in the gulf of Mexico.

I think this will be THE game changer – The US and unfortunately my beloved Europe (not the EU which I despise) will have take this too far. For me personally, it would be the last straw and I would take any military ship out if I were Putin (except the European ones that should be towed back home by the Russkies after switching off the electronic devices with a fly over.

NATO and US are a pox on Europe and humanity. Stupid is too kind. They are beyond stupid.

Open up base in Cuba. Maybe base some missiles there. Then watch the hysteria from the Washington degenerates.

“Moscow has repeatedly stressed that Ankara officials should just admit that they wronged Russia in downing its Su-24.”

As if the government who denies the Armenian genocide will admit their wrongdoings. . . Turkey is rogue beast.