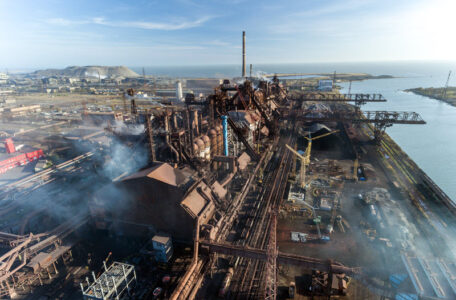 “No one gave us products, no one brought us anything. They wanted us to dig trenches”. – Women evacuated from the territory of Azovstal told how they were treated by the Ukrainian military.

“Products – No one, gave us anything, no one brought us anything at all. Once they wanted us to dig trenches, but the men said: “we won’t dig trenches, there’s an open space, how can we go if we have lost weight, the pants are hanging down, which of us are diggers!

Woman: “But we had 17 children. One infant, one girl 2.5 years old. That time when they (note: fighters of Azov) came, I put him (note: my son) on the bed like this and asked him, I said, please be quiet, because they will kill and won’t ask your name.

I treat Russians and normal Ukrainians well, I treat them well. I have a lot of friends in Russia, but I don’t have anyone in Ukraine, I would like to go to Russia.”

“To intimidate, they always said don’t go there, it’s a burnt-out city, there’s nowhere to go. They didn’t want people to go into the city, they kept saying the same thing, that there were no houses, everything was burned out, everything was bombed out, there was nowhere to go. Like don’t go there, there’s bad guys there, they’ll just ******* you.

The military wouldn’t let us out, they said: “We won’t let you out there, there are bad people there, they’ll shoot you now, they’ll you now… well, you can’t go there!” And they covered up: “We’re worried about your safety, so go back to the bunker.”

We went to the bunker on our own, we work at the plant with my husband. Yes, we went there on our own on February 26, understanding that it was a safe place. Of course we couldn’t think of that, it’s a civilian facility, it’s a place where we worked, we couldn’t imagine what it was… Believe me, if I had understood that this would happen to me there, I naturally would not have gone there.

We went there to save our lives and the lives of our children, knowing that it was a safe haven.

We couldn’t do everything anymore, they wouldn’t let us in, I so suspect that they had already come with the intention that: “We’ll hide behind the civilians here!”

We learned everything completely from the radio. In general, the military did not give us any information. For the military to come and say, “Guys, here’s the corridor, come out!” No, there was no such thing.

We knew the information from the radio. We tried to go out, but they wouldn’t let us go in.

Our family decided unanimously: No going back to Ukraine! But if we decide to go back, then only to Mariupol, but not to Ukraine!

Let’s just say, Ukraine as a state, me as a citizen of Ukraine, but it died for me!

I was very offended that this is how they were treating us!”

The BBC also published the interview of the second woman (in the yellow jacket), last night as the main story of their website. The interesting thing is that they cut out all the parts where the woman is being critical towards the Ukrainian army or Azov and where she mentions that the forbade them to leave. Interesting indeed.

No need for that !! You WILL be de-nazified in the end, X Files or no X Files.

https://t.me/dvish_alive/13189 Russia is murdering his prisoners! Here the proof everybody knows that and therefore is telling you all the shit you want

It is possible and to most people preferable that this does occur to the NAZIS, foreign fighters and to some of the mercenaries. Murder is the incorrect word, EXECUTE is the correct term.

Question, how do you know Ukrainians didn’t kill their comrade for being captured? How do you even know he is dead if his face is cut off and he isn’t just lying there? What if he was traded in a POW swap and he went back to fight and died? Lastly you Ukras have been caught with hard video proof and killing injured soldiers who are defenseless and shooting surrendering Russians and shooting POWs in their legs. So I guess now lastly why should we care or take your accusation seriously?

AP accompanies Zelensky’s SBU thugs as they kidnap Ukrainians who speak out against the regime. This is an obvious propaganda piece designed to normalize crushing dissent. Imagine how they act when cameras aren’t on.

The AP released a propaganda piece on Friday framing the kidnapping and torture of the Zelensky regime’s critics as a crackdown on “traitors”:

Ukraine cracks down on ‘traitors’

Viktor appeared nervous as masked Ukrainian security officers in full riot gear, camouflage and weapons pushed into his cluttered apartment in the northern city of Kharkiv. His hands trembled and he tried to cover his face.

The middle-aged man came to the attention of Ukraine’s Security Service, the SBU, after what authorities said were his social media posts praising Russian President Vladimir Putin for “fighting with the Nazis,” calling for regions to secede and labeling the national flag “a symbol of death.”

“Yes, I supported (the Russian invasion of Ukraine) a lot. I’m sorry. … I have already changed my mind,” said Viktor, his trembling voice showing clear signs of duress in the presence of the Ukrainian security officers.

“Get your things and get dressed,” an officer said before escorting him out of the apartment. The SBU did not reveal Viktor’s last name, citing their investigation.

Viktor was one of nearly 400 people in the Kharkiv region alone who have been detained under anti-collaboration laws enacted quickly by Ukraine’s parliament and signed by President Volodymyr Zelenskyy after Russia’s Feb. 24 invasion.

Offenders face up to 15 years in prison for collaborating with Russian forces, making public denials about Russian aggression or supporting Moscow. Anyone whose actions result in deaths could face life in prison.

“Accountability for collaboration is inevitable, and whether it will happen tomorrow or the day after tomorrow is another question,” Zelenskyy said. “The most important thing is that justice will be served inevitably.”

Although the Zelenskyy government has broad support, even among many Russian speakers, not all Ukrainians oppose the invasion. Support for Moscow is more common among some Russian-speaking residents of the Donbas, an industrial region in the east. An eight-year conflict there between Moscow-backed separatists and Ukrainian government forces had killed over 14,000 people even before this year’s invasion.

And there it is…what most of us suspected and now been confirmed by the civilians that have been freed from these NAZI scumbags. AZOV using civilians as human shields. Western media censorship. THE USG’s new “Ministry of Truth” will also suppress this but within the rank and file of western intelligence agencies they know full well what is going on. Information warfare and propaganda this is indeed and the west has by far the most resources, experienced and most influential sources that it can use to continue censoring this information and feeding it to the dumbed down masses. Russia on the other hand has no major western media outlets that can publish it’s perspective to a western audience contrary to the idiot paid trolls that regularly post their BS pathetic comments on here. No doubt a lot of them work for intelligence/military agencies and whose job is to constantly post inflammatory comments in forums and publications like this one and to distract proper discussion by filling the comments section with pathetic propaganda and simplistic shite. Never reply to a trolls comments after you post a comment. Ignore them and eventually they go away. Don’t feed the trolls.

I wonder how Russia is gone materialise the Nato General out of the Azovstal, same trick, making telling terrorised people shit can’t happen if you find no US General. Ore maybe I ame wrong Russians are great in forcing the laws of reason and rationalty.

Sometime you have to eat shit to survive.

Peter The Ungrateful
Reply to  ;Johan