This article provides an attitude of the Russian Defense Ministry. More on the topic could be found here and here. 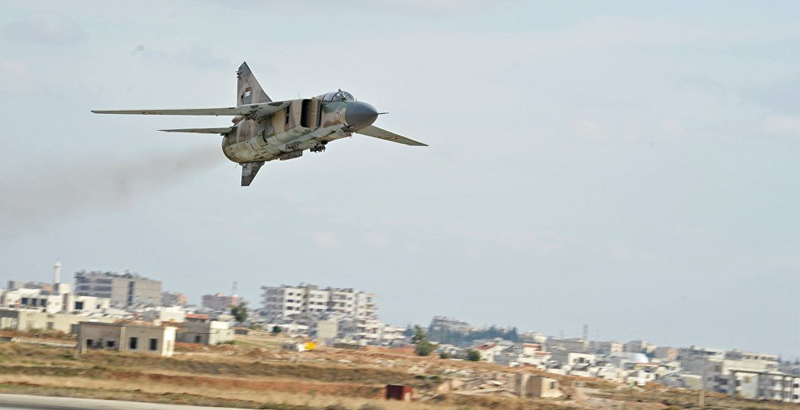 On April 4, the Syrian Air Force carried out an airstrike on a large warehouse with weapons and military hardware of terrorists on the outskirts of Khan-Shaykhun town in Idlib province, where also workshops for production of landmines with poisonous substances were located, spokesman for the Russian Defense Ministry, Major General Igor Konashenkov, said on Wednesday.

“According to data of Russian means of objective control of the airspace, yesterday between 11:30 and 12:30 local time, the Syrian air power carried out an airstrike in the area of the eastern outskirts of the settlement of Khan-Shaykhun on a large ammunition depot of terrorists and gathering of military hardware. Workshops for production of landmines, filled with poisonous substances, were located on the territory of this warehouse,” Konashenkov said.

The spokesman for the Russian Defense Ministry noted that ammunition and chemical weapons have been delivered from this warehouse to militants, operating on the territory of Iraq. “The fact of their usage by terrorists has been repeatedly proven both by international organizations and by the official authorities of this country,” he stressed.

According to the Russian Defense Ministry, ammunition with poisonous substances from the same arsenal was used by militants in Aleppo, when the fact of their usage was spotted by Russian military specialists in late 2016. “Symptoms of the poisoning of the victims in Khan-Shaykhun on video footage in social networks are exactly the same as the victims in Aleppo had in the autumn of the last year,” Konashenkov pointed out.

He reminded that all materials and samples, proving the fact of usage of chemical weapons by terrorists in Aleppo, were documented and handed over to the Organization for the Prohibition of Chemical Weapons (OPCW), but they are still being studied there until now.

Earlier, the London-based Syrian Observatory for Human Rights (SOHR) reported that the Syrian government forces carried out a “chemical attack” in the province of Idlib, which resulted in killing of 58 civilians and injuring of about 170 others.

Later, the SOHR reported that the Russian Aerospace Forces allegedly committed an aerial raid on a hospital, in which the victims of the chemical attack, allegedly carried out by Damascus, had been taken. The Russian Defense Ministry denied this information.

Against the background of these reports, France demanded to convene a meeting of the UN Security Council in connection with the “new chemical attack.” The US State Department and then US President Donald Trump accused Syrian Presiden Bashar al-Assad of carrying out the chemical attack. Washington called on Russia and Iran to exert pressure on the Syrian president.

According to media reports, Turkish President Recep Tayyip Erdogan told his Russian counterpart Vladimir Putin that what happened in Idlib jeopardized all efforts, made during the negotiation process in Astana.

The NATO nations never fail to seek an opportunity to try to create a No Fly Zone in Idlib and the immediate faux hysteria of the Western leaders demonstrates clearly that the ‘Assad Must Go ‘ narrative is still alive and well.

Turkey will be involved with the terrorist manufacture of chemical weapons and is likely the route used to transport these weapons to Iraq via their Kurdish oil theft associates in Northern Iraq. White Helmet ambulances are a likely mode of transport.

The NATO actors are also using this hysteria to put pressure on Trump’s policy in Syria.

There are reports that citizens from a village were taken by Al Nusra thugs this week as hostages and that many of them were the ‘victims’.

We know that a weapons warehouse was struck by the SAA air force . It is unlikely that civilians would have been allowed in or near such a facility. It is therefore safe to assert that the terrorists intentionally quickly poisoned these people to make another snuff movie .

The videos online look staged to me.

Jihadist lost their factory – hah hah! Good news on any day! Their supporters are really pissed.

The timing is off. The Syrian air strike on the bomb factory was around noon. The chemical incident supposedly happened just before 7 AM.

The Syrian air strike mostly shows that the jihadist fighters had chemical weapons, which has been known for years (just that the west never acknowledges).

The answer is full and unfettered access to the site. Without that it’s all BS.

SOHR=MI6 long fingers and missing of the truth…