Militants opened fire on civilians, who were protesting against ‘local council’ of terrorists in the eastern district of Aleppo city. 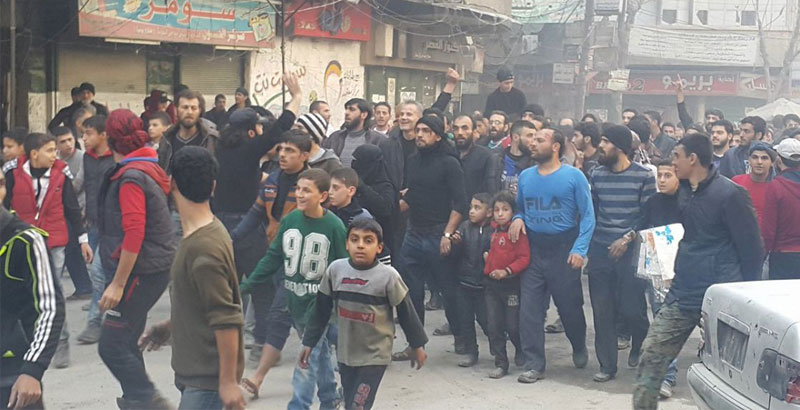 Despite terror of militants, residents of the eastern districts of Aleppo do not stop their protests and attempts to break into safe areas of the city, the TASS news agency reported, citing spokesman for the Russian Defense Ministry, Major General Igor Konashenkov.

“Using automatic arms, militants opened fire on protesters in Haidari district without warning. Seventeen people, including two teenagers of 13 and 15 years old, were killed at the scene; more than 40 others were wounded. Terrorists detained and took away in an unknown direction about a dozen of men, whom they considered as ‘organizers’ of the stir. At the same evening all of them were shot dead,” Konashenkov said.

According to witnesses, about 300 people gathered for the rally on Thursday in order to express their protest against the ‘local council’ of militants.

“During the unrest, they tried to break through the Bustan al-Qasr checkpoint. Militants broke up the demonstration, firing on protesters from a heavy machine gun, and then mined all approaches to the checkpoint and placed snipers on roofs of nearby houses,” representative of the Russian Defense Ministry added.

But if the protesters are allready dead? Why shoot them?

Re-read the article “Terrorists detained and took away in an unknown direction about a dozen of men, whom they considered as ‘organizers’ of the stir. At the same evening all of them were shot dead,” that was in addition to ““Using automatic arms, militants opened fire on protesters in Haidari district without warning. Seventeen people, including two teenagers of 13 and 15 years old, were killed at the scene; more than 40 others were wounded”

He is making fun of the title which says that they shot dead protesters :D

Malice In Wonderland
Reply to  VGA

Clearly he either hasn’t read the title properly, or has no understanding of English nuance.

The only terrorist in Syria is the dictator Assad, morons…

No, Assad is the only terrorist in the history of the universe

I disagree. At least he kept the peace between Christians and other Religious groups. Sunni just resent him because they want a Sunni Islamic State under Shari to Rule. Most of the terrorists are takfiri terrorists which means they kill all disbelievers including Shia.

Whether Assad is a “terrorist” or not, the fact remains that Syria is a sovereign country. While regimes like that of Saudi Arabia… a far more draconian, anti-democratic and brutal regime… remain unchallenged and unmolested, the west (and its puppets) and fanatics such as yourself have no right to point hypocritical fingers at anyone else. The only “moronic” statement here is yours for failing to grasp the reality that the concept of “terrorism” is purely subjective. But then, as a Wahhabist, objectivity is a notion that’s completely foreign to you.

MaraMechavio
Reply to  Malice In Wonderland

Because the KSA and other GCC countries buy western arms in hundreds of billions of $$ and keep western military industries viable.Just see what is happening in Yemen and Palestine and you get the picture.

You appear to be educated , but your words suggest your paid to spew nonsense .

Wahy do you even bother to come here if you know your going to lie? Maybe you have a inate need to lie and get it fulfilled here? Your lying! Blatant, lies, do you get off on this? Do you like to hear of the murders every day..

Good job by USA coalition backed and armed terrorists that they dont want bombed by Russia and SAA.I bet John Kerry is in cloud 9.