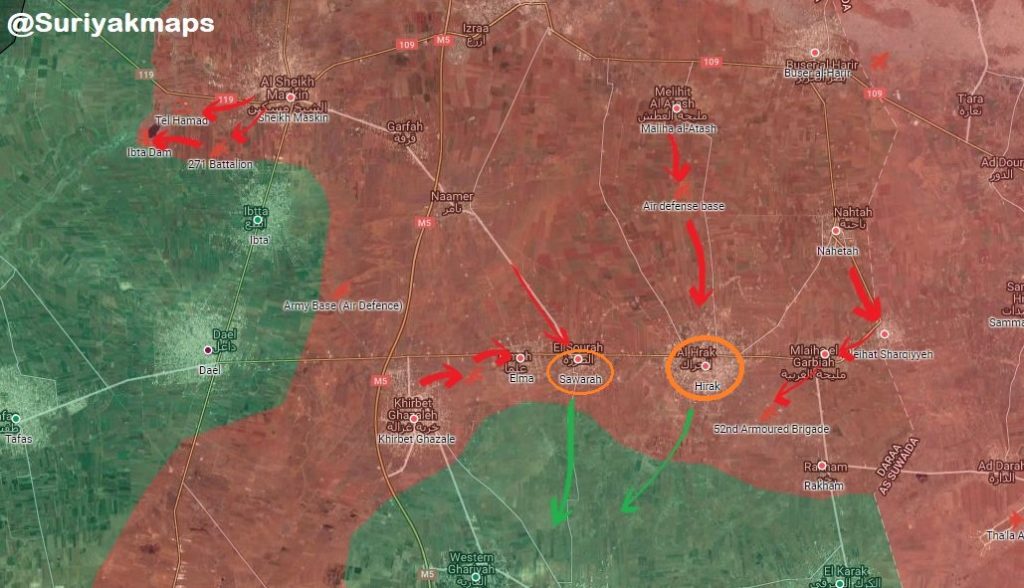 A spokesperson for the Russian Foreign Ministry, Maria Zakharova, once again affirmed the need to eliminate terrorists – ISIS and Hayat Tahrir al-Sham (formerly Jabhat al-Nusra) – in southern Syria during a press briefing on June 28.

Commenting on the situation in the area, Zakharova once again emphasized that the US and its allies did nothing to combat the terrorists in the area despite the reached de-escalation agrement in the area.

HINT: The agreement excludes ISIS and Hayat Tahrir al-Sham and is designed to allow moderate opposition groups to separate from them and to set conditions to combat the terrorists.

So, the Syrian Arab Army (SAA), backed up by the Russian Aerospace Forces, took a firm stance to defeat the terrorists there.

“We confirm the need to fulfill these provisions, including on the fight against terrorists – Al Nusra and ISIS,” Zakharova said. “It’s high time our American partners did what the Syrian forces are doing now with the support of Russia’s Aerospace Forces.”

Zakharova also recalled the US decision to allocate $6.6m to the White Helments saying that this decision casts doubt whether Washington sincerely wishes to eradicate terrorism, and to achieve settlement and stability in Syria.

Over the past few days, the SAA and its allies have made large gains against Hayat Tahrir al-Sham and linked militant groups in the province of Daraa thus causing jitters in the mainstream media and officials of the US-led bloc. MORE HERE

Zakharova well done. This is time to crush all child butchers US and Israeli both migrants.

so eliminate them dont just talk about it. It is getting rather boring where action is needed to use empty words.

empty words. so far we ‘ve seen nothing else but dead terrorists and the SAA advancing up down left and right. wtf else do you need?

exactly what I said. No green buses, no live to kill another day, in a different location. That is what the f*ck I want. have any problem with that?

Why don’t YOU stfu and go to Syria and kill terrorists yourself instead of being an ignorant keyboard general with no clue how to conduct anti-terrorist warfare – no understanding of how military strategy or nuance of strategy works.

“Different location” – foreign terrorists are being bussed out of liberated areas and towards the borders – in case you haven’t ‘noticed’. Why waste ammo and soldier lives on unnecessary battles when the terrorists are willing to vacate and return back to their country of origin where they’re ‘dealt’ with over there? ‘Surrender’ of terrorists is a military tactic to be utilized by the winning side – but you’re saying blind slaying is how wars should ALWAYS be conducted?

It is the role of professional soldiers.

after wingers and inside forwards? I wouldn’t touch the subject ‘roles’ if i were u.

I dont argue with retards kid.

So you’re shutting the fuck up as per my instruction – good!

no, it’s not what you said. read better.

maybe you should read better.

The fight in the south for Nasib border is over from Itba to Tal Zumitiyah is under SAA control and have reconciled. Hirak has been liberated Al Karak and others have reconciled as Bors al Sham are reconciling and surrendering their weapons. Have told everyone this would be easy as soon areas in Darra city learn they are besieged will continue the tidal wave of surrendering.

Yes, those deals with terrorists will cause a lot of problem (bombing to civilians) later.

Promitheas, good morning, you don’t like it, but the russians have a long tradition of political activity or political front in time of war, as I know, at least since their civil war thas has begun in 1917. By the way, who killed everyone, in that time, were the so called white russians. Another note, even an anihilation battle don’t mean to kill them all, means the extermination of the military force of the enemy, not properly the extermination of all the enemies. The soft approach only don’t works with the guys of ISIS, those seem that really want to be exterminated.

What??!! The “white Russians” were the ones who killed everyone??!! What communist propaganda have you been gulping down??? If it was really true, then the “white Russians” would have one that war and not the bloody Bolsheviks!!!! No, my dear mistaken Jorge, it was the Bolsheviks who murdered millions of Russians!!! The Bolsheviks were controlled by Zionist jews and Lenin gave them permission to exact revenge on the members of the Russian society they had defeated. Thus, the Zionist Bolshevik terrorists set out to torture and massacre the Russian intelligentsia: students, nobles, land owners, Russian Orthodox clergy, teachers, professors, etc.. anyone who might opposed their new communist, totalitarian, Zionist controlled order!!!!

Good morning Jc Plancarte, by rule, the white russians killed their bolsheviks prisioners captured in the battlefield. I’m not speaking about political repression, I’m refering behaviours of war. Political terror is one thing, usual execution of the war prisioners is another.

OK what weapon do you want to use. If you will take up arms and go to fight these animals, I’ll go with you. But stop telling others who are actually there taking fire how they should die, because you are impatient.

I haven’t seen any terrorists that run so fast except US backed terrorists.

Sorry Rob, I flagged you by mistake.

Why the 12 hr ceasefire? Letting the Terrorists arm up and dig in?

The enemy misuses important events such as ceasefires to backstab the Mujahideen and it is probable that more such unfortunate incidents could occur. Islamic state orders all its Mujahideen to remain in their trenches and areas of control and to not venture into enemy controlled areas or cities even briefly. Such actions are strictly prohibited.

“HINT: The agreement excludes ISIS and Hayat Tahrir al-Sham and is designed to allow moderate opposition groups to separate from them and to set conditions to combat the terrorists.” See you blind idiots? They protect only their rebels, not the true force fighting against them.

Maybe one needs to add : want to build a great state of believers !

or perhaps for the trolls to add more bullshit?

Our Jihad against the traitors follows and conforms will all the principles of our religious, intellectual and humanitarian laws. The summary of our outlook is that our Islamic state reserves the right to live a free life under the shade of an Islamic government that adheres to their Islamic ideology. But the arrogant Idol of today (America, Russia and their allies) seek to force their own ideology upon us through the means of occupation and usurp our most fundamental right of life (freedom). The Russo-American invaders have not desisted from any brutality and severity in pursuit of subduing our Islamic state. They bombed our villages, cities, mosques, hospitals, murder innocent Islamic state civilians, forcibly displace them and torment thousands of Muslims through unimaginable torture in prisons. And they have afforded themselves judiciary exemption as well so that they may not be held accountable to anyone. On top of this, they want to spread new provocations, immorality, discrimination and conflicts in the country, loot our precious mineral wealth, create new armed groups for their own colonial goals (The so called “Moderate rebels”) and seek to use our homeland as a rival post against our neighbors and the entire region in general. If the American invaders were given the opportunity to succeed in implementing this dangerous policy then the entire region and specifically our country of al-Sham and people would be embroiled in such misery and hostilities that all pathways of salvation would be lost.

Admin, please ban everybody, who put here arab text. mainly for jihadi propaganda. Tho official language of this porum is english. You should watch this condition.

” Terrorists In Southern Syria Must Be Eliminated: Russian Foreign Ministry ”

Only in the SOUTH? What about in NE-Syria, around the two American military bases? ;) OK, if only in the SOUTH… you may start with the occupied GOLAN HEIGHTS …

Good morning, don’t worry, you will return the Golan Heights to Syria without war.