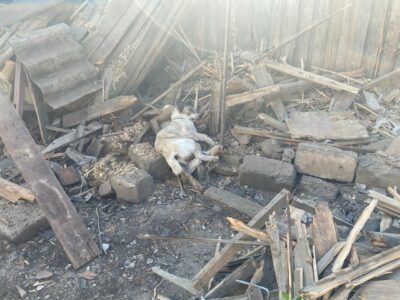 The Armed Forces of Ukraine (AFU) continue senseless shelling on civilian areas in Donetsk and Luhansk People’s Republics, as well as in Russia, causing infrastructure damage and increasing number of civilian casualties.

The cities and villages in the DPR and the LPR have been suffering the AFU shelling on a daily basis for eight years. After the launch of  the Russia’s military operation in Ukraine, the AFU were repelled from their military positions near the residential areas along the entire Donbass front lines, except the outskirts of the city of Donetsk, where the front lines remain almost unchanged since 2015. As a result, local residents are still suffering from the strikes by the AFU which lead to no military results, but only kill civilians and destroy the local civilian infrastructure. Unable to counterattack and forced to defend and retreat from their military positions, the Ukrainian military continues a senseless campaign of intimidation of the pro-Russian population, which has been carried out for many years. The advance of Russian-led forces is slowed not only by the heavily fortified positions of the AFU in Avdeevka and Mariinovka, but also by ceasefire regimes declared in order to evacuate civilians from the encircled settlements in the areas.

As soon as the Kiev’s forces received military supplies from their Western allies, the foreign weapons have been used to kill innocent civilians in the DPR and the LPR.

On May 29th, the AFU increased their attacks on the city of Donetsk. A map released by the local security officials showed that almost all city districts were targeted by the Ukrainian strikes, including the city center. 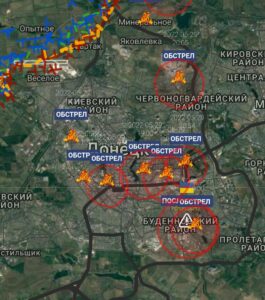 The AFU reportedly used the British-made M777 howitzers with 155 mm caliber shells to attack the city of Donetsk. 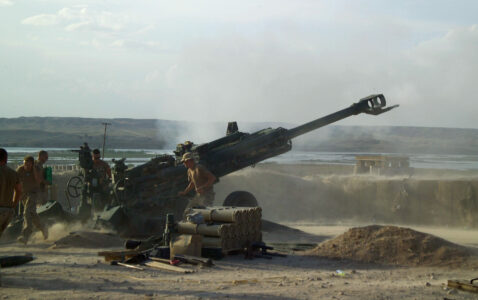 Only on May 29th, 4 civilians were killed and 20 others were injured. The DPR office in the Joint Centre for Control and Coordination on ceasefire and stabilization of the demarcation line (JCCC) reported the following AFU attacks on the settlements of the Republic:

in the Petrovsky district:

in the Leninsky district:

Thus, the total number of civilian casualties from the attacks of the AFU for May 29, 2022 is 24 people. 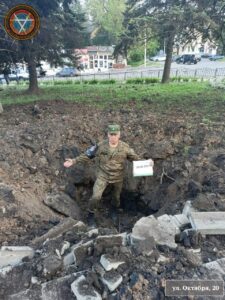 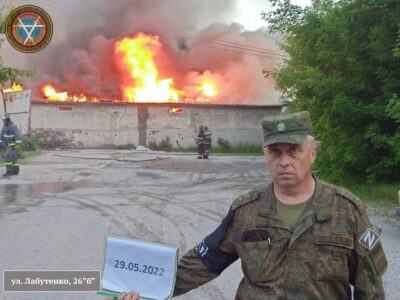 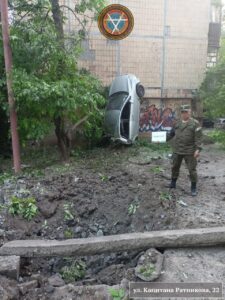 On May 27th, the AFU units carried out a bloody provocation in the Luhansk People’s Republic. The central district of the town of Svatovo was struck by three Ukrainian Tochka-U missiles with cluster munition prohibited by the Convention on Cluster Munitions 2008.

As a result of the attack, 3 local residents were killed, 23 wounded, 5 of them were children, including a 2-month-old baby.

According to the local military officials, the air defense units of the LPR People’s Militia shot down the missiles, however, civilians were killed as a result of detonation of the cluster warhead of the missile. 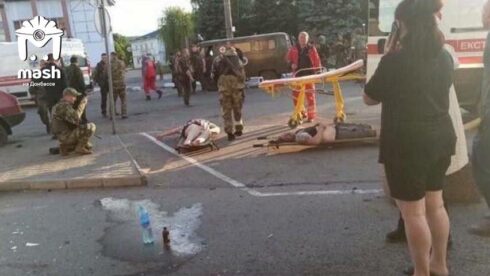 The same bloody tactics are used by the AFU in the southern Ukrainian region of Kherson, which is under control of the Russian military. While the attempts of the Ukrainian units to counterattack fail and result in heavy losses, the AFU continue shelling local civilians.

On May 26th, the village of Novovoskresenskoye in the Kherson region was shelled with rocket-propelled cluster munitions of remote mining. In total, two unguided missiles were fired at the settlement by the AFU units and nationalists, which launched more than 600 PFM-1C anti-personnel mines. The attack was carried out with 9M27K3 Uragan multiple rocket launchers with PFM-1S anti-personnel mines. Each rocket carries 312 mines. 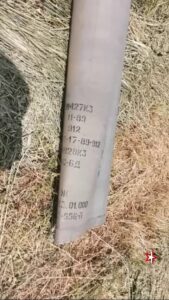 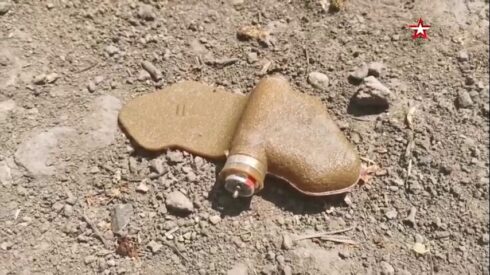 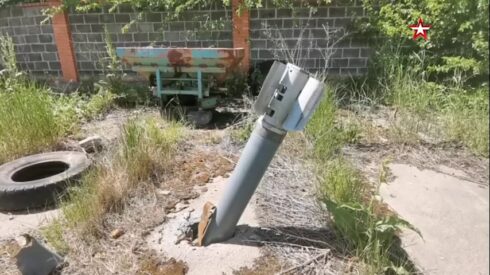 Unlike the AFU, the Russian military does not deploy the military equipment in the residential ares in the settlements under its control. The Russian military constantly confirms that it is avoiding targeting civilian facilities. Definitely, civilian casualties cannot be avoided during the hostilities. However, while the one side is attempting to reduce their number, the Kiev regime is deliberately using the terrorist warfare in an attempt to threaten the locals, likely provoking them to protest against Russian forces, who are in fact defending their lives.

The Kiev regime has been killing civilians for eight years, it continues killing them now, despite the inevitability of a retaliatory strike against the military targets of the Armed Forces of Ukraineю

“The AFU reportedly used the British-made M777 howitzers with 155 mm caliber shells to attack the city of Donetsk.”

The nest of conspirators in the Britlander embassy in naZi KieV has made itself a legitimate target for any and all countermeasures and weapons that Russian peace keeping forces should decide to apply. The same of course is true concerning all other Natostan aka EUSSR participants in the ongoing Ukrop terror. Either the once sovereign “nations” of Urupp cast out their evil angloZionaZi warlords or accept the consequences of being accessories to war crimes, genocide and murder on a daily basis.

Russia cannot afford to turn a blind eye to the Natostan gangsters in the way it tolerates the Zionazi regime in occupied Palestine by allowing the terror “state” to slaughter in Syria with impunity.

The swine running the angloZionaZi crime syndicate only respect the iron fist of force and swift violence in retribution. Use it

The dumbass hohol Nazi terrorists are dumber than shit, the deadbeat Americunt cowards have given them over $100 billion in weapons and these hoholassholes are losing and running at the sight of brave Russian ratniks (warriors) SLAVA ROSSIYA! ZZZZZZZZZZZZZZZZZZZZZZ for ever!

While BAE System is “supposedly ” British the largest shareholders are USA investment companies ( I have the names ) . 70% of the gun is USA made including the barrel ( yes I know BAE has a base in the USA ) but is it the latest digital operated version or the basic model ?

just some bombs on the anus of Klaus, Soros, Nato pedo cowerd terrorists and all eu politicians who are playing with fire !!!

Well Said Comrade!.The Time Has Come For RFR AF’S To Go For Total-War,Striking With Their STRATAEGIC NUCLEAR FORCE’S ON THE U.S. EU/NATO If They Attempt Further Interference, Either Through Poland’s Confederation With Rump Ukraine.Or Attempting To Insert The Breach From A 2nd Front in Moldova Against Transinistria.Or Attempt A NATO Naval Blockade in The Black Sea Even Supplying Antishipping SSBM’S(HARPOON’S)IN ANY OF THESE EVENTS U.S. EU/☢️ SIGN THEIR NUCLEAR APOCALYPSE DEATH 💀 WARRANT@MUTUAL ASSURED DESTRUCTION 😡 SUICIDE PACT!!. HOWEVER THEY DON’T HAVE SENSE TO KNOW WITHOUT HYPERSONIC ICBMS/IRBM’S THEY NO LONGER HAVE STRATAEGIC DETTERENCE SO RFR AND CCP-PRC’S COMBINED NUCLEAR FORCE’S CAN AND WILL DECISVELY OVERWHELM AND DESTROY THEM ALL!!!.Z GOOD RIDDANCE TO A VERY EVIL EMPIRE WHEN IT HAPPENS Z!!.

How many inches have the russian military advanced today?

Russian forces fought their way into the centre of Severodonetsk from the north and south despite some resistance on Monday as ground troops seized the strategic city in eastern Ukraine.

The Ukrainian military also said that Russian forces were “reinforcing their positions on the city’s outskirts”and bringing additional equipment and ammunition into the area to press their offensive. However, international media saw large numbers of AFU retreating in haste or surrendering.

What has your question to do with the article?

its called distraction, its where the troll tries to distract from the article and not only anger the reader but engage him to respond to childrens prattle while forgetting about the article. western trolls are very infantile and not very effective.

Excellent reply -it causes viewer to downgrade the “worth ” of a website . Paid posters are given instruction in this, it shows most of them here are “bottom level ” worth to the NSA/CIA/GCHQ etc etc.

Luhansk region governor Serhiy Gaidai said Russian troops had advanced into the city’s southeastern and northeastern fringes and Ukrainian troops “had retreated across the river to more defensible positions” . But he said Ukrainian forces had not been able to stop the Russians at the village of Toshkivka to the south, potentially accelerating Moscow’s push to encircle the area and trap a large number of retreating AFU.

“Capturing Sievierodonetsk is a fundamental task for the occupiers … We and can not hold this advance without more western military support,” Ukrainian President Volodymyr Zelenskiy said in a televised speech.

“Some 90% of buildings are damaged. More than two-thirds of the city’s housing stock has been completely destroyed.” However, independent media embedded with Russian forces dismissed the reports of widespread damage and reported sporadic AFU resistance to the rapid Russian advance.

You mean how many hohals have run away today of course.

Inches!? We are in the third decade of the 21st century, stop living in the 18th century!

Pity we can’t hit number 10 downing greet with a Hyposonic…..

If the western foreign policy establishment continuous with its irrational group think we might see that happen at some time in the future. If nuclear war breaks out London will definitely be one of the first targets.

No need India will own tiny UK in a few years and hand it over to Russia.. JAI RUS!

if the brit cuckolds continue with their idiocy, a couple of Sarmat will pay a visit for sure

I’m afraid that the taking out of storage of the T-62 by Russia is not aimed at Ukraine, but at the west.

Maybe this time they are really fed up with the bullshit and are preparing to march all the way to Lisbon.

An italian general ( one of the top generals, not an armchair political imbecile ) yesterday has given an ominous warning, saying that the EU should stop the bullshit in Ukraine, otherwise they could receive a very unpleasant response by Russia.

Russia should charge the Western leaders with war crimes and genocides, who send those weapons’ to UA

the UA have always excelled at shooting old ladies and civilian homes. same tactics used for the past 10 years due to marshal ineptitude and general cowardice among the conscripts. of course this only occurs if they fire at all. the majority of the time they just drop whatever weaponry they have and run like banshees through the fields after the first shot is fired. soon destroyed (Again)

The Ministry of Defense of the Russian Federation confirmed the fact of the strike on the operational control point of the Operational Command “South” of the Armed Forces of Ukraine in Novy Bug, which was reported in the morning. According to the information received, 37 officers, including 3 generals, were killed as a result of the strike. FIXED!

Russia may have to sanitize the whole of Ukraine up to the Polish border.

It is unfathomable that these artillery attacks on strictly civilian population centers continue. These so called “front lines” that have not changed i find troubling being it suggests these positions are fixed. If so then why are they still not destroyed? The artillery weapons being used are mobile, yes, yet are still kept within the range needed to murder innocent people indescriminantly. These weapons have technology to be very precise as proven by Russian forces in taking out command centers and entrenched fortifications. So why are these AFU artillery positions still active? Maybe it’s time to specifically go after the the major shipments of British and US weapons shipments?

Tsirkon is its way to help out Donetsk.

Another naive question I have: Is is possible to sort of back-calculate the trajectory of the shelling at least directionally and send out air units to vaporize these AFU howitzer stations? I don’t know is this totally unrealistic or logistically impossible?

Terrorussians must be removed from Ukraine, Moldova, Georgia etc.

I can assume the story in the post is true. What I do not understand is why the howitzers targeting Donetsk city civilians have yet to be destroyed. The capability to do so certainly exists via missile or counter battery fire, so why is this still happening at over 90 days into the operation??

RF, fight hard, Ukraine needs to be liberated from those savages!