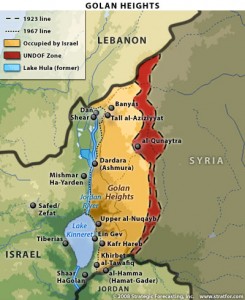 Militants of the Free Syrian Army (FSA) and Jabhat Al-Nusra have launched an advance to capture the ground inside the Syrian Golan Heights. The militant advance follows the clashes along the southern perimeter of the strategic hilltop at Tal Taranjah in the Al-Quneitra Governorate.

On Monday, militants of the Free Syrian Army and Jabhat Al-Nusra started to storm positions of the Syrian forces at Tal Taranjah, Mazra’a Al-Amil, Tal Hamriyah, and Tal Al-Ahmar. The firefights have been going there.

According to the arab sources, the militants started offensive after the Israeli Defense Forces (IDF) fired a number of missiles at the Syrian position in the Golan Heights.

Time to time, Islamists fire indiscriminate rockets at targets in the Israeli-occupied Golan Heights. However, IDF ignores this and shells positions of the Syrian Armed Forces.