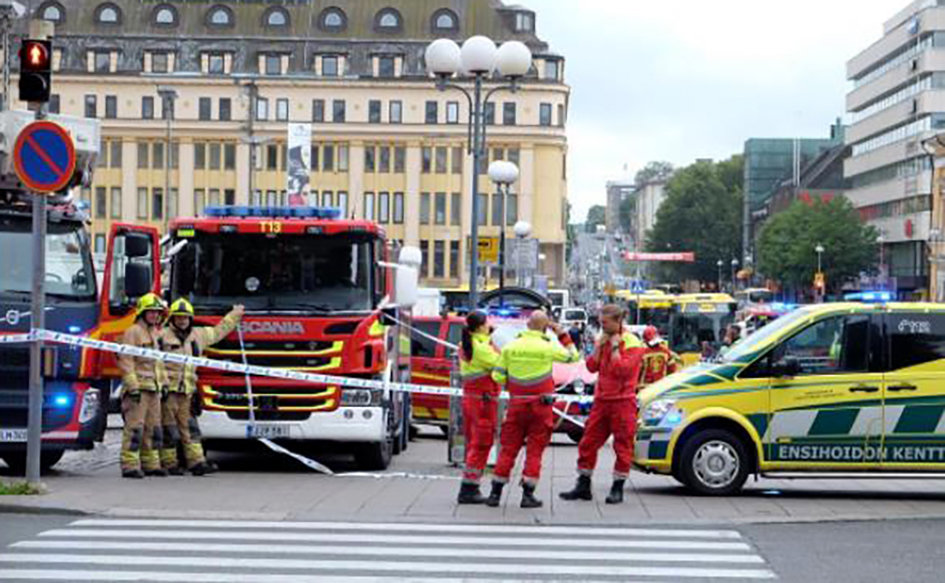 Police officers and rescuers in the Finnish city of Turku after several people were stabbed on Friday. Bernat Majo /AFP/Getty Images

Two people have died and six people have been injured as a result a stabbing attack in a market square in the southwestern Finnish city of Turku.

Police shot and arrested a man linked to the attack, but didn’t reval his identity. Paula Risikko, the Finnish Interior Minister, said she did not yet know whether it was a terrorist attack.

In other words, the Finnish government is clearly hidding the essence of the incident.

russia is more islamic. go in chechnya. russians lick the ass of islamists :(

What they are doing is obviously a better option than what is happening in Scandanvia.

sure not. in russia are the largest moshees in europe. in moscow. russia has already fallen. millions of russians flee to west. from est go in rassia only moslems. lost country.

“millions of russians flee to west. ”

There is no salvation in any Western country so there is no point in leaving.

only more then 10 millions left

Are you dumb, seriously?!

why? look at google and you get confirmed all infos i wrote. also from russian, governmental sources.

Why did they shoot him ? Breivik was not shot down. capture him and show what he has to say.

He’s still alive, but rumors said he was shot in the balls. Guess it was more like: “allAAAAH akbaaaar”.

Anyway, no doubt Finnish tax payers will fix him up and release after 2 years at most.

Not comparable at all.

What I mean is that Breivik hold a gun and was arrested while the suspect was holding a knife and have been shot down. So, it doesn’t add up.

its about direct threat. Holding a knife close to a body is very dangerous.

Polices here has brains, are well educated and mainly use them well.

And we also have a good court and jail system which in many matters replace john wayne or worse in most matters.

As a matter of fact, the yeller say “varokaa”, which means “be awere!” and its finnish word. The man who yells it is chasing the terrorist. On the other hand finnish eye wittnesses has told that the terrorist did shout “allahu akbar” at the market place where stabbing did occur.

Brainwashed northerners. There is not hope for them. They will all be slaughtered soon and their women enslaved.

No, we wont. We react slower but much better.

The Scandinavian multi-cultural utopian model – their political and media class are so completely politically invested in this idealism they cannot tolerate either any dissent or uncomfortable realities breaking through their ideological social fantasy.

Watch the document: “History of political correctness (complete)” on youtube. All is explained. PC is an alternative form of marxism where economic and working class revolution has been replaced with cultural revolution and corruption. This is the origin of the multikulti craze.

Finland is parroting Sweden in all the bad stuff and going soon down the same rabbit holes of massively increased racial violence, sexual assaults, no-go zones, car bbq fiestas, completely rotten and drained out society and collapsing services. They are some years behind.

Thats a right wing version of its worst.Not many in Suomi/Finland will recognice that version at all.

Finland not even have many emmigrants and taking away many weapons is mainly about the violent threat from Russia is reduced.

There also has been very, very few incidents in Finland which Cortisol trying to be the biggest dwarf in Finkland try to give 500% inflation a year.

You even watch the document? You deny the existence of the Frankfurt school, cultural Marxism as an alternative to working class revolution and political correctness embedded in American university campuses, despite it being all documented??

Like I said, Finland is behind Sweden by several years but can potentially catch up quickly. Not as many non-integratable immigrants yet, but still many unrecognized racially motivated terrorist attacks and knifings in recent years, and sexual offense and violent crime on the rise in correlation with this uncontrolled mass immigration.

Taking away weapons has nothing to do with Russia. What is your logical explanation for that claim? You think the Finnish population is highly likely to revolt for Russia? If so, you’re a complete idiot.

in russia is bigger multiculti utopia ;)

Far out. You seemes not even able to understand our systems. Like an expert in horses repairing cars.

Your systems, Mr Kurdistan, are sleepwalking into totalitarianism – any political dissent over political policy issues like immigration will increasingly get you publicly outed by media and fired from workplaces in Scandinavian countries.

As a Finn I can tell there is video of many suspects fleeing, one unconfirmed eyewitness of a Blackwater tattoo on one of the suspects leg. A tourist from Luxemburg told in a newspaper there that he saw two people knivehugging people. Finnish government told at first “it is not a terrorist attack” but now it has changed. We are so fed up with our sold out politicians, and have been for 25 years. One alt-media publisher got arrested in Spain just now and has stomach cancer. All normal!

no information about same terrorist attack in russia???

Very cheep conclusion. Good policework often hide facts to go deep and find the structure behind if its possible.

Update: Today the finnish president and some ministers have reacted to the incident. Not by offering their resignations for the open door refugee policies or even by putting to place border controls new refugees. Not by even worrying of the thousands of paperless refugees on their own in Finland now, capable of who knows what. No, they have suggested new intelligence laws giving more powers to authorities. They have also voiced their grave concern to the fact the Finnish citizens are not happy to see this sort of activity. It even sounds like a veiled threat: Finnish citizens should obey their masters. So, to me it says it all.. they are more worried about the unsatisfied Finnish population for their EU-paymasters, Eu is on its last legs.

Finland acts on US&Israel’s orders, just like the rest of the EU.

I would have to agree on that and its very hard for people here to understand.