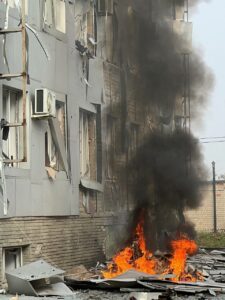 On October 25, an explosion thundered in the city of Melitopol which temporarily became the capital of the Zaporozhie region which came under Russian control.

A car with an improvised explosive device was blown up near the building of the Zaporozhye regional TV company ZaTV. The attack took place in the morning when the company’s employees were on their way to the office. According to preliminary reports, five civilians were injured.

The head of the region claimed the explosion was a terrorist attack.

On October 20, the Armed Forces of Ukraine shelled the civilian ferry crossing in the Kherson region. As a result, four civilians were killed, including two employees of the local media. The wounded and the head of the region supposed that the Ukrainian attack targeted the journalists.

The terrorist Kiev regime has been targeting independent journalists for years. Dozens of correspondents were killed by Ukrainian nationalists in recent years, most of them were covering the political and military developments in the pro-Russian regions, as well as revealed the real face of the current corrupt terrorist regime in Ukraine. Since the hostilities broke out in the Donbass, and especially after the beginning of the Russian military operations, independent journalists and employees of the local media companies became the important military targets for Ukrainian Nazis.

The MSM journalists in the ‘democratic’ West continue to turn the blind eye on the terrorist attacks and assassinations of theis colleagues.

Time to Gen. Armageddon to upgrade his offensives. If needed with nukes.

Russia is not even able to safeguard its territory. In the meantime, it has lost four more villages in Lugansk. And it continues to leave all Ukrainian supply routes untouched I really wonder how certain analysts like Martyanov or Saker cannot see the almost complete failure of the operation from a strategic point of view. In the meantime, temperatures in Europe are higher than expected, so the strategy of freezing Europe in winter will also fail.

USA-OTAN used the same methods to train nazi-fascist ukranian that they used to train terrorists (Alquaeda, ISIS, ). So, nobody is surprised about the terrorist attacks.

Z for Victory
Reply to  Walstat

Just it’s not yet winter now…

kotromanic
Reply to  Z for Victory

Cause like the russian polititians for these analysts the lives of those “russians” are not important as long as there may be a victroy on the 4D chessboard of geopolitics somewhere in 20 years.

Just like the russians are too smart to use all their anti air systems in syria cause the west would know how they work … while selling it to turkey and others where the US can check them out as long as they want.

There are 3 sure things in life, its cold in the winter, death and taxes.

I will admit its unusually warm, 26⁰C where im at now, where 5 years ago it was -15⁰C at this date. But dont you worry winter will come and it will hit hard.

Also, if you would properly read saker and Martyanov, you would have picked up on when they say russians dont need to defend every square meter of land to the death, they have lots of square meters, save your men and your gear. Its a sound strategy actually. Mobile defense will awlays be better than static defense, PERIOD.

What would be the point of annexing territories if you don’t even control them all? Russia does not have time on its side. Russia can mobilise a few people while NATO can use Ukrainians and thousands of mercenaries and bring in as many weapons as it wants

I do not see it that bad. Russia has enough territory. So in Putin’s eyes everything goes exactly to the plan. You people here still wonder why Putin not crushes the Zelensky regime, why he lied the young russian troops into this war by telling them they are just going on a “training mission near the ukrainian border” when in fact he sent them over the border and directly into a hornets-nest of armed-to-the-teeth anti-communists, why he waited full 8 years with his invasion and till Ukraine was fully up-armoured and its military steelhardend, US-trained and up-armed and up-ammunitioned to the teeth, moreover why he invaded with just that small completely insufficient number of troops etc. etc. Is that all just ‘coincidences’ ???? Questions over questions you have. And there is only one simply answer. He is not who you think he is. He is in cahoots with the NWO and is a traitor of Russia. Same as Biden is a traitor to USA, Scholz to Germany, Macron to France etc. etc. That’s the sad truth !

Ukrainian soldier who raised the flag on Snake Island was denazified today. He was famous to be a founder of the startup company “GayDar”, an app who discover gay people located close to you (if he is registered in the app of course). Later he changed the name of the company to Aidar, to honor this Neonazi Battalion of the same name. Rest in Peace gay man.

Headed by Osama bin zelensky Backed by the terror state of Al-murica, al-britani, al-franci, al-allemange and the entire terror organization of Al Europi It’s the Al Ukrainia terrorist organization!!! running out of everything else, now must rely on suicide car bombs to murder civilians. Coming soon Sarin attacks on loyal Al-Ukraini villages, Chlorine attacks on the general population and everyones favorite Beheading 10yr old civilians and posting it on Youtube!! Akbar Ukraini!!!!

Why southfront.org deletes and disappears my messages on the site? What is the point of financially supporting southfront.org if it is not impartial and ends up acting just like the European and American puppet news sites? Please stop deleting my posts and behave like the southfront site I’ve known for years.

there are no journalists – there are armed ruSSian mainstream media people