World terrorism is a response to western aggressions. In a book plenty of data, Jacques baud highlights the hypocrisy of the West. 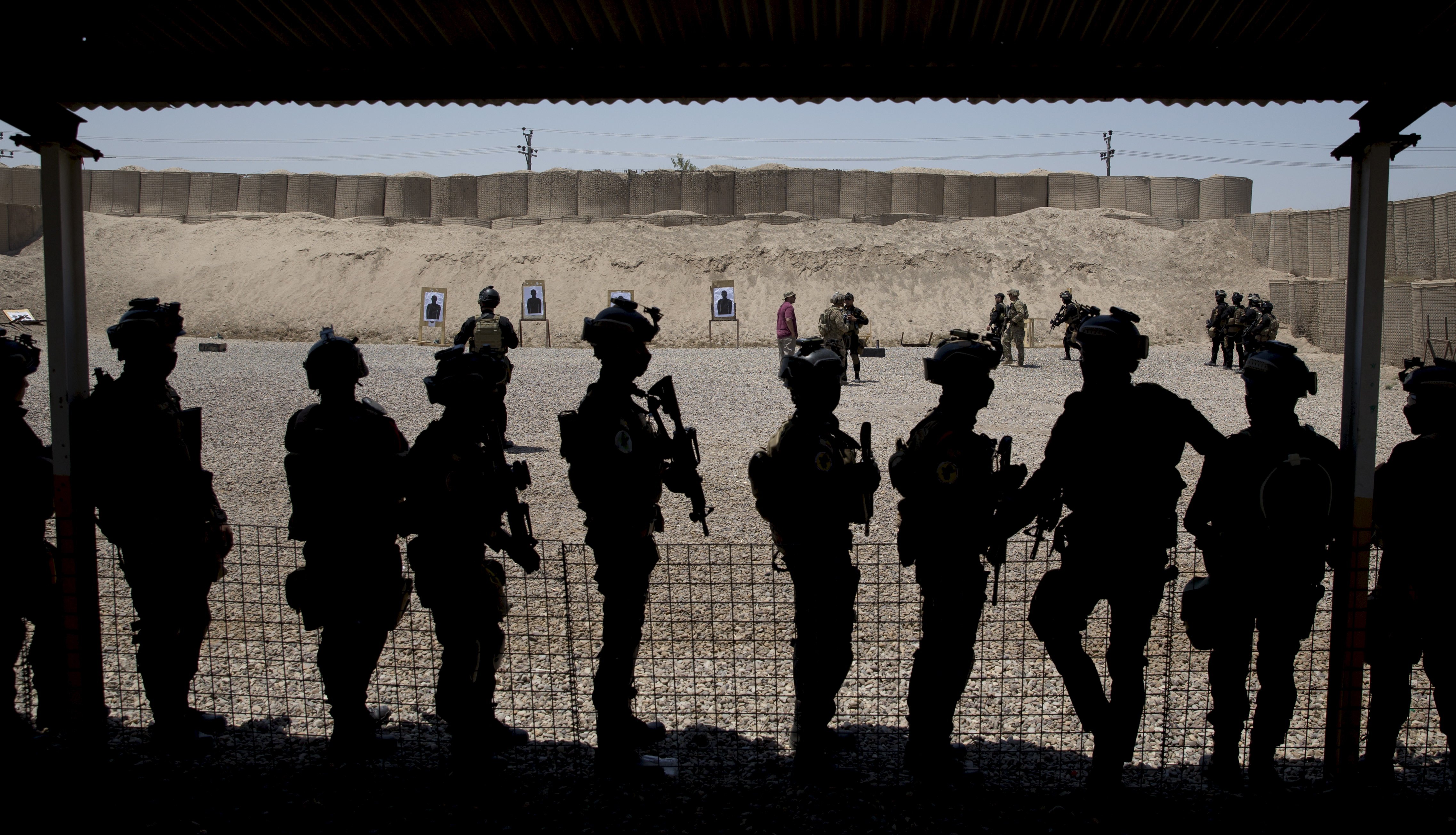 Published in lahaine.org, translated by Lisbeth Mechter exclusively for SouthFront

Colonel Jacques Baud is a Swiss expert on security issues. Here, there is a reproduction of an interview he offered to TV5 Monde due to the publication of his book Terrorisme, mensonges politiques et stratégies fatales de l’Occident (Terrorism, political lies and nefarious strategies of the West).

TV Host: Who intervened in Libya? Who armed the jihadists in Syria? And who destabilized the fragile balance in Iraq? Let’s start with the attacks happened in France these last two years. There’s something pretty appealing. Several decisions were taken, especially in the inner sphere, with the state of emergency. But there isn’t a single change in the foreign policy of the French government. How do you explain that?

Jacques Baud: Evidently, somehow that’s what the book points out. The mechanisms that lead the youth to radicalize haven’t actually been understood.

It is a response, it is a way…in fact, terrorism is a way to try to suggest our governments to stop striking, bombing, to stop military intervention.

We could compare terrorist attacks to the “strategic” bombings that the US carried out against the German civil population in the 40s to force the citizens to turn their backs to their own leaders. And that is, in a certain way, what we see today with the Islamic State.

By the way, a video published by the Islamic State explains it clearly saying…in fact, talking to the westerners saying: “Tell your governments to stop bombing us”.

Essentially they cite the example of Spain on 2004, and I want to highlight that it was precisely the same strategy jihadists connected to the situation in Iraq adopted. It consisted on forcing Spaniards too withdraw from Iraq. And, in fact, after the attacks of March 2nd, 2004 in Madrid, there were elections, whose results were clearly influenced by the attacks and led the Spanish government to retreat from the coalition present in Iraq.

Since that moment, the Spanish forces displayed in Iraq were protected by the Iraqi militias until they left the country, and since then, Spain hasn’t been a target for that jihadist terrorism.

Namely, that is the scheme that actually feeds terrorism nowadays.

TV Host: So, what inspires you to debate about radicalization based on the essentially religious interpretation, mainly in France and Belgium? What’s the motivation, according to you, for making this interpretation?

Jacques Baud: In the West, it’s hard to question our own policies, first of all due to evident reasons: because there are electoral periods and if we start questioning all the previous political decisions that could influence on the electoral results.

But, in general terms, in Europe we have a sort of ethnocentrism that in fact inhibits us to think in a critical way about what we have done, it inhibits us to see in a critical way the results. We just have to see what we have gotten in Libya, for instance. We eliminated Khadafi, who wasn’t clearly a way too recommendable individual. But I want to recall that, on 2010, despites the nature of Khadafi’s government, Libya was the African country with the highest rate of human development, according to UN.

So, in fact we forced Libya to retreat to a stage of combats between Jihadist factions, without giving them any different choice. Namely, we bombed them, we destroyed them and we left.

In Iraq we did more or less the same. We also did it in Afghanistan. But it’s too hard for us to see the results. And we have a tendency to present Jihadism, or terrorism to be more precise, as a fatality, a fatality provoked by a desire to impose Sharia and other things to us.

Of course, this lecture has some favorable opinions, especially of those who oppose to migratory policy. It’s true, on the other hand, that we have had migratory policies in France and Belgium that were clearly very poor. There has been a bad handling of those migrations and today we have a kind of society inside society, but we have just found that out.

But now it’s easy to establish that connection between terrorism and migration.

TV Host: …there are very pertinent paragraphs, quotes mainly. You quote, for example, mullah Omar, ex-chief of the Taliban, who declares the following:

“We are truly blessed. Never, not even in dreams, we expected a gift as the one Bush gave us. He is the best promoter of our international movement”.

Jacques Baud: Of course, I already described on my book The Asymmetric War, Jihad is fundamentally a response. And that response can only be fed by our own offensive actions. Without initial action, there’s no possible response. Therefore, with our actions we are feeding Jihad, and that is in essence what mullah Omar said.

We could also quote many other jihadists, even more recent ones, like Al-Bagdadi and the work of Abu Musav al-Sury, that confirm this strategic stance. 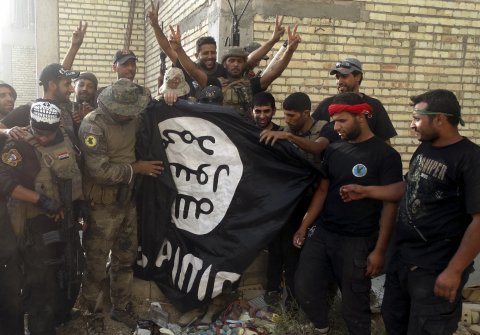 Iraqi security forces stand with an Islamist State flag which they pulled down at the University of Anbar, in Anbar province July 26, 2015.Reuters

TV Host: There also this quote to Voltaire: “You lead us then to think about the possible manipulation in terms of international policy. But how to change the optic knowing that those who try to reflect about the facts are at risk of being qualified as conspiratorial and plotters?”

Jacques Baud: There’s a difference with conspiracy. Conspiracy is based on the idea of a superior intelligence, occult, clandestine that allegedly pulls the strings of conspiracies –in plural- to obtain strategic advantages. I don’t put myself into that optic. All the contrary. I think those are not Machiavellian calculations, carefully orchestrated, they are a series of idiocies, of short term political opportunisms.

Jacques Baud: on the contrary of what the big majority of the world’s public opinion think, there are no confirmed proofs of Ben Laden’s responsibility, even Dick Cheney, former vice president of the US, claimed in a national broadcaster: “We never said we have the proof”.

TV Host: When you say that kind of things, they seem to be plenty of common sense, but you also expose yourself to this kind of criticism. What to do in order to reflect about the validity of the facts themselves that surround us on a daily basis?

Jacques Baud: Just look at FBI’s notice of the search for Osama Ben Laden. This notice never mentioned 11-S and, in fact, it was something that the media mentioned, but there’s isn’t actually a sole intelligence information that leads to incriminate Ben Laden with this attack in particular.

But it was easier, in that moment, to have a subject, an emblematic individual that allowed to focus the search and show that, even those terrorists had managed to trespass the filter, there was an idea of who was guilty of the attack…and that allowed them to save their image.

TV Host: I found an example that maybe contradicts you. It’s about Canada, western country that hasdecided to check its policy out. I’m going to mention what Justin Trudeau, Canada’s Prime Minister, said on February: “People terrified by the Islamic State don’t need our revenge. What they need is our help”. So he has decided to withdraw his country from the coalition that is bombing Iraq and Syria.

Now we have to think. Terrorism has done no other thing than increase during the last 25 years. We had 400 attacks per year in 1990. Today we have nearly 15 000. And we have never wondered the reason of that increase.

If we don’t want to become an every time more securitarian society we have to think seriously about the consequences of our actions, especially considering that none of western interventions in the Middle East in the last 25 years was legitimate.

Every time we cheated a little bit. 2003 events, namely everything that happened before US attack to Iraq, are facts widely documented. And in fact all the other conflicts we have had were also stained with deceit and disinformation.

TV Host: Lebanon doesn’t intervene abroad, neither does Tunisia, and both have been victims of terrorism. Why are those countries target of terrorist attacks? 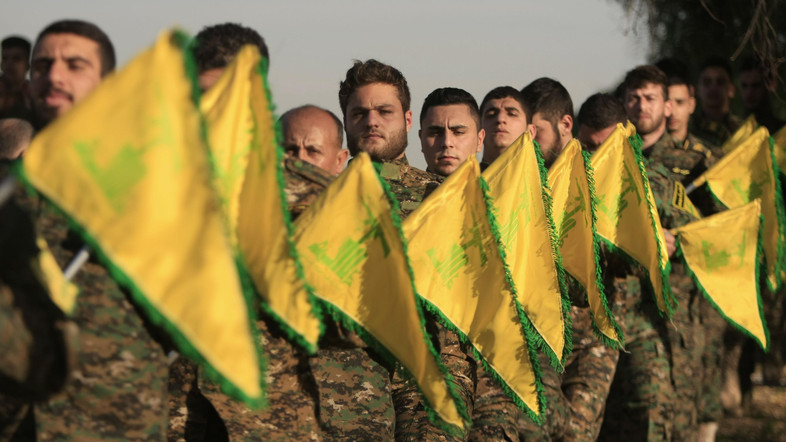 Hezbollah fighters hold flags as they attend the memorial of their slain leader Sheik Abbas al-Mousawi, who was killed by an Israeli airstrike in 1992, in Tefahta village, south Lebanon, Saturday, Feb. 13, 2016. (AP Photo/Mohammed Zaatari)

Jacques Baud: That isn’t completely true, because there is Hezbollah which fights altogether with the Syrian government. Hezbollah has units of fighters, and it’s for far, one of the forces that has lost more militants in the struggle against the Islamic State and the other jihadist groups. Hezbollah has made a considerable effort to fight against ISIS, and we have a clear tendency to forget that.

In response, the jihadists also attack Lebanon, particularly the southern areas, where Christians and Shias are very strong.

TV Host: You are an expert. If you had to advice today’s West leaders. What would you recommend them, urgently, to avoid new attacks in their countries?

Jacques Baud: I think that the wisest solution would be to take advantage of changes, for instance, next elections, to say we have gone towards a re-analysis of the situation and that it’s probably wiser to withdraw and stop the bombings. That’s not showing fear, because that’s not the case. It’s a change of strategy.

I want to remember that on 2014 the Islamic State was considered by the US as something that didn’t represent any kind of threat for the West at all. And numerous western intelligence services, by then, supported that idea. It was on 2014 when, due to inner policy reasons, both in France and the US, bombings against the US, which wasn’t a threat by then, finally started.