In an official statement, Hay’at Tahrir al-Sham (HTS) accused the fighters of Faylaq al-Rahman of killing one of its fighters in Damascus eastern Ghouta. 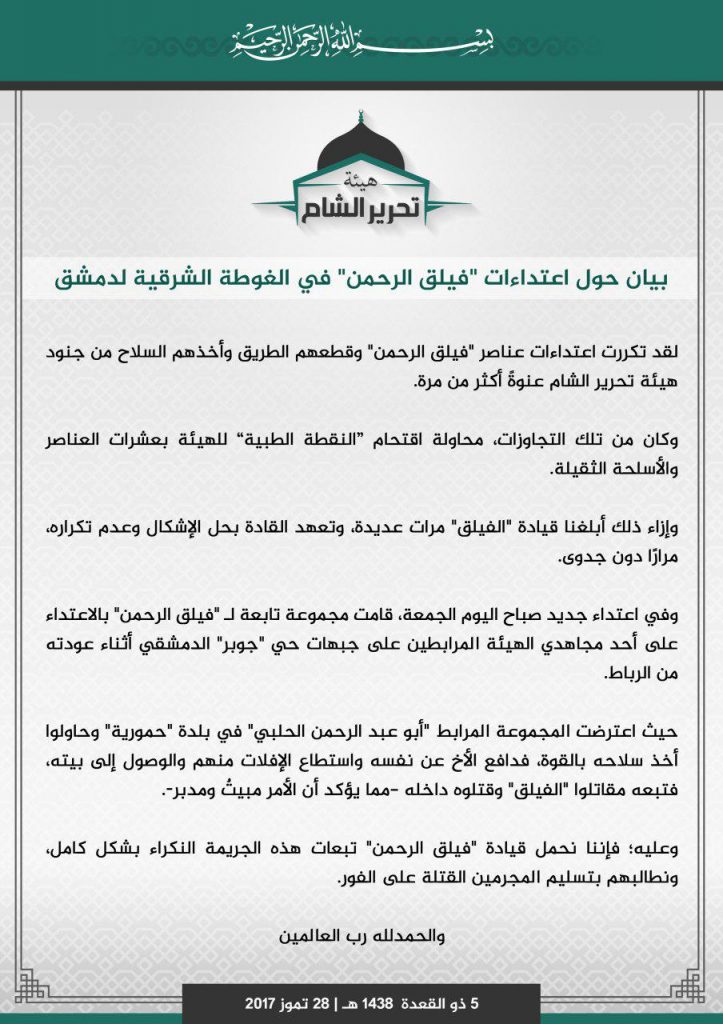 In the statement, HTS claimed that the attacks of Faylaq al-Rahman against HTS fighters were repeated more than once by cutting off roads and taking their weapons. HTS also revealed that Faylaq al-Rahman fighters tried to break into its “medical point” with dozens of fighters and heavy weapons.

The statement added that HTS informed the leadership of Faylaq al-Rahman several times, and the leaders pledged to resolve the problem and not to repeat it, but didn’t keep their promises.

In a response to HTS statement, Wael Alwan, spokesman for Faylaq al-Rahman, said to opposition media:

“HTS element has nothing to do with the fronts or fighting, he was a security man who was walking with his arms in Hamuriya town. He attacked one of Faylaq al-Rahman elements, then he was stalked by a patrol of Faylaq al-Rahman, where he hid in a building under construction and fired at them, which forced them to deal with the situation and kill him.”

Alwan also said that HTS abuses were repeated more than once in the Ghouta.

HTS held Faylaq al-Rahman responsibility for the results of this “heinous crime” and demanded that the killers be handed over immediately.

It’s worth mentioning that HTS and Faylaq al-Rahman fought Jaysh al-Islam together month ago and managed to capture several positions in Eastern Ghouta. It’s believed that the real reason for the dispute between the two parties is that Faylaq al-Rahman’s will to follow the de-escalation agreement in the region. Meanwhile, HTS is working to sabotage peaceful efforts.

HTS is very right abt killing of one of their rats…. I mean fighter…. He was innocent and I fully support them…. Now HTS should right away wipe at least 100 fighter scams of falaq AR rehman………… SAA will then take good care of……. Whosoever remains