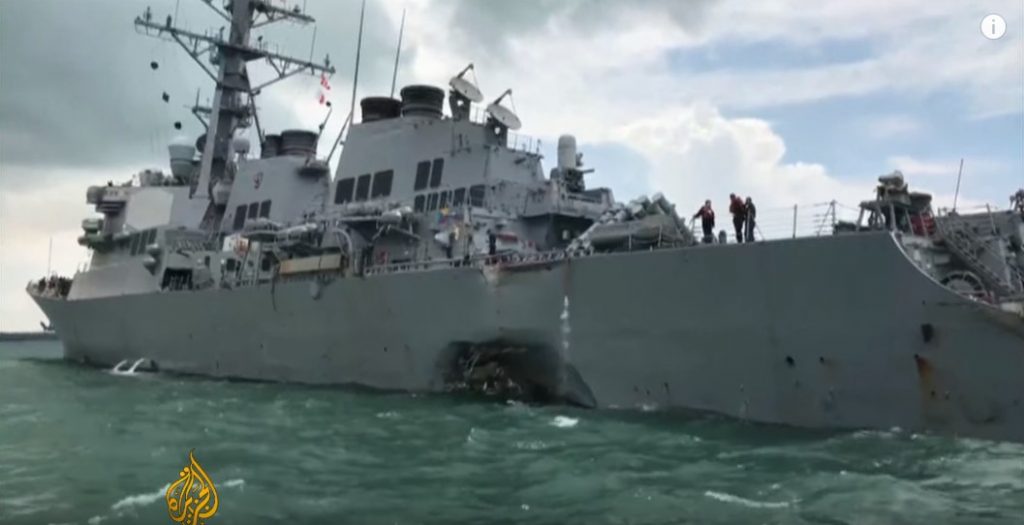 Photos and videos have emerged online showing a result of the collision involving the guided-missile destroyer USS John McCain and the oil tanker Alnic MC.

The incident took place east of the Strait of Malacca before the dawn on Monday. Five sailors were injured in the collision. 10 others are missing.

“Initial reports indicate John S. McCain sustained damage to her port side aft,” the Navy said in a statement. “There are currently 10 sailors missing and five injured.”

The damage to the hull resulted in flooding to compartments, including crew berthing, machinery, and communications rooms. However, the destroyer made its way to Singapore’s Changi Naval Base afternoon under its own power.

Yes, it is likely that McCain collides with everything, even being christian.

I would say he is : – a wolf in sheep cloth – a demon of darkness pretending to be an angel of light

Imho he’s one of the many sad bypass products of the Cold War.

With the added negative to be driven and motivated only by hatred and revenge, in addition of course of personal power and money.

He was never able to get over his downing over Nam and the subsequent imprisoning.

Actually, books could be written on the subject, but I prefer not to give much weight to it anyway.

On the positive side, his company produces excellent Freedom Fries.. :D

McCain is apart of the same establishment cult that worships Lucifer and he is helping to pave the way for the Faults Christ and the Mark of the Beast. McCain is 100% anti-Christ Immanuel. http://faithandheritage.com/

Well, it’s just Americans. They don’t cooperate with others. They do whatever they want and endanger the world with their irresponsible acts. Like a spoil child.

This destroyer was sent out as part of ongoing conflict between China and US over South China Sea – this may have diluted the intended message a little.

This may be a hidden cost of operations. Instead of training Capt’s on basic navigation, we a rushing them into symbolic, chest thumping missions.

Anything with the name John McCain is having a “bad Karma year”! Collisions and fast growing brain Cancer! Perhaps signs of good times ahead?

please don’t. we are better than this.

You’d think that if you operate the biggest navy in the world your captains at least would have learned to avoid collisions. But apparently this is the 2nd one this year. Who are they putting on the wheel on these ships?

Cretins ? I have to admit that this crash made me smile. I just hope a woman or trans gender was not ‘driving ‘ :)

McCain, what a name : – Cain, the stupid brutal murderer of Abel, reincarnated in a macdonaldized American – America’s warmongerer, liar and peace-hating #1… with such an cursed evil name, they can be happy they did not sink right away…

Was the commercial ship registered to N Korea ? :D

Are they going to do this once every month now? I thought ramming as a naval tactic was something out of the trireme era.

Yeah nothing says it did the ramming like a gaping starboard hole.

Poor sailors, cowardly ambushed just as they were innocently sleeping their hangover off. Maybe we can expect some maneuverability and situational awareness from a warship? Going by the photos, the John McCain is chock full of those high-tech gizmos the Americans are so fond of.

That was a very strong message from Trump to North Korea. :D

Why does America bother to have these things if they can only find other ships by bumping into them?

Shiet! Again? Try and hit “reset” button on that AEGIS “The world’s most advanced combat system”. Maybe it will enable proper function of radars… It’s possible US ship commanders tried to play a pissing contest…with a TANKER… Nevertheless, commercial crews are real dicks most of the time, they are not listening to anybody, just pushing their rutes (time is money). There is an example of it in RT’s doc. series “The Black Sea Fleet”, RUS navy had a submarine drills, they had to secure emerging space, and container ship was directly in designated area, multiple calls, nobody answers. They had to wait for ship to leave the area. Very polite Navy Officer. One shot over the ship with AK-130 and one close by would deliver a proper attention, suddenly, the radio silence would be no more.

Strange collision ! The bulb of the tanker hit the port side aft ? If you are in the TSS ( traffic separation scheme ) in street Malaka it’s fairly safe ! as everybody is going into the same direction . Tankers are slow in general 12/14 knots , a destroyer like that can outrun such kind of ship easily they can hit 28/30 kts in a few seconds . My own maritime experience with US naval vessels ( I met those c…ts in Scotland and Cyprus ) is that they are working with very complicated procedures which is worthened by a huge amount of officers on the bridge ! The communication to other ships is intimidating to the limit of arrogance. 2 collisions like that ! start to higlight the fact that procedures and checklists are more important than common sense and good seamenship! anyway after one trip on the seaway to Hamilton Canada I made acquaintance with the Canadian and US pilots + coast guards , the Canadians where open friendly and adequate, the us pilots and coast guard where slightly arrogant and dominant , the hole attitude is over the top in the US maritime institutions . I guess they will solve it with new procedures and even more shouting on the VHF

i heard alex jones say theres a theory the chinese are hacking the GPS satellites they use to navigate and sending the ships off course, or disabling their navigation or something

“Update to the below: This time, three compartments flooded, the ship is listing heavily, the damage is worse than the Fitzgerald. 5 injured, 10 missing.

The latest destroyer collision has an anomaly that proves it was done on purpose. There are 3 possibilities as to how it was accomplished:

1. Possibility 1: A foreign government has a hack on GPS and the guidance systems, as well as the surveillance electronics on U.S. Navy ships, and is both confusing the GPS and rendering the surveillance systems on the American ships useless, and then directing the collisions via remote.

2. Possibility 2: The Navy is testing a cloaking system, and is allowing the collisions to happen, to prove it works.

3. (Most probable) – Traitors in the U.S. government are working with enemy foreign governments to make the collisions happen on purpose.

One of the above is happening, and the photo below proves it. Notice how the damage is perfectly symmetrical. This can only happen if the American ship was completely stationary, not moving at all, and waiting for the collision to happen.

This would be done by treasonous Commander Common Core, who can’t do the calculus required to set the speed and heading of the ship to ensure a collision while both ships are moving. If the American ship was moving when this happened, the gash would not perfectly match the ship that hit it.” – JS ( http://82.221.129.208 )

I would tend to go with the first option, we seen what happened to the Donald Cook in the black sea a few years back all these vessels are Arleigh Burke-class destroyer’s. Maybe China is proving a point in the region.

Russell A Wilson
Reply to  IH8Lies

I suggest to avoid “conspiracies at all costs”. There is no strange or weird causes to this accident.

It happened as the result of a general impoverishment in operational readiness of the USN – a tendency present in all the US armed services, and one that the military industrial establishment is trying hard to hide.

The Commander was probably trying to work out the Common Core math since it can take minutes to get the ship from standing to underway up to 28-34 knots.

What makes this so humiliating for the US is that this ship was sent to the South China Sea in defiance of China’s territorial claims….. lol And in this time, John McCain is diagnosed with the fastest growing brain cancer and the USS John McCain has its own tumor! How the fuck does this happen with such amazing timing! Chinese are laughing their asses off right now! God Bless America??? More like God hates America and especially John McCain!