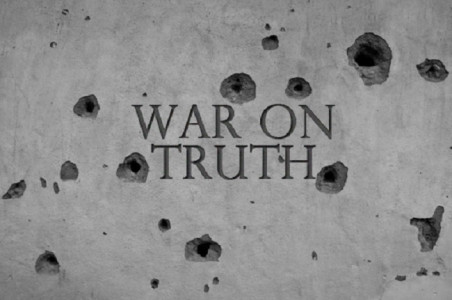 1. The overthrow of Yanukovych in Ukraine in February 2014 was a U.S. coup, and definitely not a democratic revolution there.

2. The U.S. Government and its ‘news’-media lied — didn’t merely “err” —to deceive the U.S. public to believe the “Saddam’s WMD” falsehoods that were used to ‘justify’ criminally invading Iraq on 20 March 2003.

3. The U.S. Government and its OPCW lied — didn’t merely “err” — to say that Assad was using chemical weapons, so as to ‘justify’ America’s criminal invasion and occupation of Syria.

4. The war between Russia and Ukraine is actually the war by America against Russia in the battlefields of Ukraine and started not on 24 February 2022 when Russia invaded Ukraine but even well before America’s criminal February 2014 coup in Ukraine and was already secretly in the planning stages in the Obama Administration by no later than June 2011.

5. The claim that Taiwan isn’t and hasn’t even been a part of China is a blatant lie about history, to deceive U.S.-and-allied publics and aiming to enable the U.S. regime to grab China too.

5. U.S.-and-allied ‘news’-media lie constantly so as to deceive their publics to support their criminal invasions, coups, and sanctions, against countries that the U.S. regime is aiming ultimately to conquer, even countries (such as Iraq, Libya, Syria, and Ukraine) that never threatened, nor posed any threat to, U.S. national security.

6. The U.S. repeatedly shows up in international polls as being overwhelmingly a bigger threat to peace in the world than is any other nation.Whereas Americans don’t know it, foreigners certainly do.

7. The termination of American democracy, and the decision by the U.S. Government to ultimately conquer the entire world, occurred on 25 July 1945, and the Cold War excuse — that it was about communism, instead of about ultimate global conquest by the U.S. — was, and remains, a lie.

8. The U.S. regime’s statements that it had not in 1990 promised to Russia that its ending its communism and its Warsaw Pact military alliance would mean that NATO itself would not expand “one inch to the east [toward Russia’s border]” is a historical lie, and the U.S. regime started on 24 February 1990 secretly to inform its ‘allies’ (vassal nations) that it was a lie and that on America’s side the Cold War would continue until Russia itself becomes under its control.

9. The U.S. regime’s beinga regime — a dictatorship instead of a democracy — has been repeatedly proven, and is an established fact, to the contrary of all the lies and liars. Calling it “the U.S. regime” is effectively prohibited, though it is certainly true. In fact, a good case can be made that the U.S. is the world’s #1 police-state.

NOTE: A reader of this article commented on it by saying: “Actually US democracy did not end in 1945, as it never existed in the first place. The authors of the Constitution deliberately made it a republic, not a democracy.” To this, I replied:

A “republic” IS a “democracy”: they are synonyms for a nation in which the government REPRESENTS the public, instead of being some dictator or (more commonly) dictatorial class of people who DON’T represent the public.

You got balled-up in words instead of thinking about WHAT THE WORDS REPRESENT. “Democracy” and “republic” represent the SAME THING.

(There supposedly are also nations that are ‘direct democracies’ in which the government is ‘direct’ from the voters instead of entailing any voting for representatives; but none such actually exists today, because a direct democracy is possible only for tiny nations, “city-states,” and even most of those do and have had representatives. In the real world, “democracy” and “republic” are the same thing.)

Eric you forgot the 11th Truth that “can’t be published” that came out just 2 months ago that even you NEVER mentioned – https://www.ae911truth.org/ that made that coup and every other destructive effort in the looting of sovereign Nation(s) by the Anglo-Zi0ni$t establishment and it’s duplicitous UN partners possible since 9/11!

Everything in this article is true but even if it was allowed in the mass media, half of the population is too dumbed down to understand it. For people to believe that a stooge of the banking parasites and a traitor to the hardworking American people, like Trump, is their saviour or for 38% of the people to believe that Biden, who doesn’t know what planet he’s on, is doing a good job, tells you all you need to know about the population of the occupied territories of the US.

No the part of Taiwan as part of China is

The Lord of the Pimps
Reply to  Victor Dobrowolski

I think it is more likely that Taiwan will no longer exist. China is not Russia so gangs can rape POWs. A Chinese soldier has a stick wrapped in barbed wire and enough rockets to make a carpet bomb all Taiwan. Nope China never been Russia.

Nope … that’s not the way it works. If the communist government loses power in China power doesn’t cede to the nearest island any more than if the current US government lost power the USA isn’t ceded to Puerto Rico. in the event of a collapse of the CCP the next government is decided by the Chinese people … hopefully with a minimum of violence.

and American jews financed and weaponized the idiot genocidal maniac mao instead of the real Chinese leader Chiang Kai-Shek.

This perfectly illustrates my belief that media terms like “Liberal” “Conservative” “Putin” “Trump” are just words devoid of any context or meaning. They are repeated strategically to affect a Nemesis/Cult of Personality/Celebrity Worship reaction (depending on context) rather than an understanding of the institutions in which the real power lies. Essentially, kill Hitler 3.14 and the problem will be resolved, go shopping, etc.

It’s also the driving force behind songs like Dorks.

“Party over here….I’ll be over there…” – Aesop Rock

in 1974 Richard sennet described the American obsession w JFK money and sex life as “mobilized narcissism , passivity, ideological senility…..” now they are more self hating and submissive “in America the citizen has been transformed into a client, the worker into a consumer”. Christopher Lasch me and Sawyer consume LGBT sperm

Jews, as a group, played a huge role in each one of these. I am not an anti-Semite. I have had Jewish friends, colleagues, teachers, and neighbors throughout my life. I have never had a problem with them, nor have I hid my opinions from them. But I cannot sit back and disregard the very real Jewish Question.

As a society, no matter what country, we cannot sit back and ignore the role Jews play in America (and certain other countries) or in the mass media or high finance.

Nah you can say all those things, actually nobody cares about any of it. It was and still is the mantra of the hey look at me, I am an edgy woke college student and I am angry! however point to some other truths you will have real issues in America.

2) Men do not get pregnant!

3) Elections in the US are rigged!

4) Blacks do not have problems with obtaining an ID card and can find polling stations on their own.

There are many other truths that are “quasi” not allowed per say. Then there are truths that will have actual impacts when you state them.

‘Democracy’ and ‘Republic’ do not represent the same thing, and certainly did not for the US founding fathers. Zuesse is so full of bs, it is hard to give him credit for anything, and is the reason I no longer support SF. Do yourselves a favor and kick this idiot off the site.

mohummad your profit
Reply to  john

USA is a procedural republic like North Korea—Michael Sandel

Oh God I know there are people who are going to cry about this one, “The U.S. is the world’s #1 police state”.

Some facts: Yes, it is TRUE.

1. 80% of Police in the USA are fat. Fact check “FBI: 80 Percent Of Police Officers Are Overweight.” They aren’t going to protect anyone but their fat asses.

2. Police in the USA get training from Ex-military officers, Police over there don’t see you as human but as the enemy or an attacker.

3. If police officers kill or unjustly hurt someone and get fired from their department, they can just move out to another department.

4. The US police departments each are a gang.

The rich and elites control the US – it is a dictatorship. THERE IS ONLY ONE PARTY IN THE USA.

Who is making the Trump wall now? Who funding more money for police? Who is about to start WWIII?

“the East German Stasi could only have dreamed of having a police state like USA”. THOMAS Drake

The Lord of the Pimps

A Brazilian pilot says that in Brazil and India you can see many things online that you can’t in the US and the EU. We are talking about people from the western side of Ukraine who sexually harass, strip and chain prisoners. People from the east of the country actually kill or seriously injure several prisoners. But they are quickly over. Those from the west Ukraina do their work quite slowly. Whether it’s a transwoman who even tattoos an image of a Zombieland movie poster on a prisoner or a transman who, with the help of his colleagues, pushes a butt plug with fox tail into a prisoner. You can see this if you are in Brazil or India. A Brazilian pilot flies an airplane to many countries. There is a lot of free time there.

A republic is not a democracy. In our original US constitution we left presidential Elections and US senate elections to state legislatures to filter public opinion and will through deliberative intermediate institutions. One could argue we are no longer a constitutional republic nor a lawful republic, as the mob of Democracy spills over In every consideration. Moving to direct election introduced centralized top down corruption and empowerment of a federal dictatorship, er, government. 1913 was the year America as a republic died, with creation of the Fed, introduction of federal income taxes, and direct elections of US senators.

Res Publica : Public (common) good. Demos cratos : people self governance. Those arn’t the same idea , soviets were republics with everything put in common , the idea of democratie wasn’t most prevalent there anyway. Swiss have a very democratic form of governance, but not everything is public good in the Alps. Words describes ideas , things very finely , if two word exists , there is a reason that for. Don’t be like like big brother ; war is not peace , and democratie is not republic.

In every war there is a falsehood: the denial that conflict is pursued, ultimately, for anything other than power. But power is an illusion: every empire in history eventually faces the war it is trying to avoid – its own collapse. That appears to apply to nuclear war as well. https://patternofhistory.wordpress.com/

Sovjet was incompetent, amateurish and unprofessional to do the job of global communism, why US had to take over. Now US will make a new world communist order, and as we are professionals nobody can do a shit about it. We are just doing it, and all the communists under your bed was true but you were hoping!