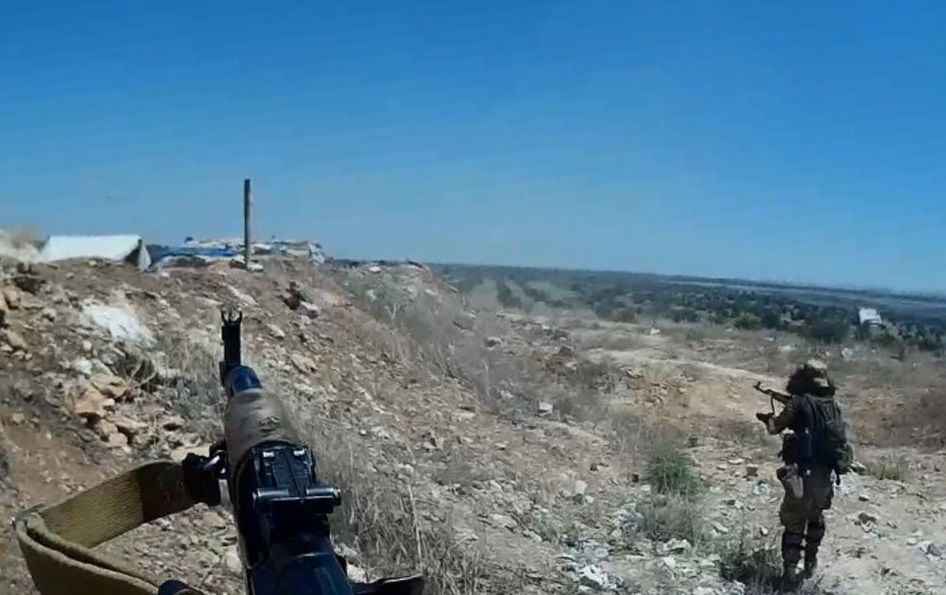 On July 8, ten fighters of the al-Qaeda-affiliated group Horas al-Din were killed while attempting to launch a hit and run attack on a position of the Syrian Arab Army (SAA) near the village of Luwaybidah in the southeastern Idlib countryside.

Earlier this month, Hay’at Tahrir al-Sham (HTS) called on the armed groups in northern Syria to form a joint operation room and launch attacks on the SAA in order to support the militants in the southern governorates of Daraa and al-Quneitra. Several radical groups, including Horas al-Din welcomed HTS’s call, back then.

Usually the SAA and the Russian Aerospace Forces respond militarily to such attacks as they are a clear violation of the de-escalation zone in northern Syria.

Locals warmly welcome families of ISIS transported by the busses by large slogans “Welcome to Edlib!” and the traiditional black flags and banners of jihad. Finally fruits of the hard effort are appearing. https://media.giphy.com/media/AFuI8YaPZZZ6pJi1S6/giphy.gif

LOL israeli muppet. How come you never attacked the jews yet? You seek unity dont you? Killing your fellow muslims instead of attacking israel is not the way to go if your purely ideologically driven.

You claim to be…but your not.

Your just following orders from the boss just like us.

I used to work for lafarge too ya know.

Since ancient times Idlib has heroes, the Sunni Idlib stands for centuries – Honorable, brave and afraid of no one! Our mothers gave birth to thousands of heroes… http://news.gooya.com/politics/images/adlabDaaesh1.jpg http://i.dailymail.co.uk/i/pix/2015/03/29/video-undefined-271D1BB900000578-21_636x358.jpg

I consider people from Idlib to be the most brilliant, most dedicated, most friendly and most rebellious people in the world. Even enemies of each other are helping themselves something what is not possible in the rest of the world. No matter where we are, we are always something special our genetical mutations are passed from generation to generation ?? We should start new movemnts to prevent injustice, arm all people young and old, men and women and learn them to defend themselves. This way we can be sure that no one ever will force his ideas and ways of live upon us and to conquer us. We must leave religious extremisim, laziness and find a good balance of it. Muslim women shouldn’t be forced to wear hijab and it should be personal option. The interpretation of the Qur’an needs to be clarified so nobody uses the verse againt others. Remember life is not race of who is bigger believer, it is enough to believe in God and his messenger. Following the Prophet should be optional (No strict Wahhabist interpretation: Why represent the prophet when you should be just representing God?) Beheading with short knifes or in the streets should be banned and should be reduced to only the biggest offenders of this religion (Atheists, Murtadeen). Allah made things that are obligatory clear in the Qur’an and religion shouldnt be hard and complicated so also ignore the Hadeeths (Most of them are not authentic anyway and it is only personal view of the writer on his interpretation of the holy Qur’an). We need to make sure our society is healthy, without foregin influence, without western morals and their devil ideology and thats all we need. Also to build a prosperous state we will need access to sea so capturing more land in the west to sea will be necessary and thats all ?❤❤ We should learn from the lions or other anmials to protect own people and keep our kind healthy and unique, without the society damaging elements (No Atheists, No Homosexuals, Mentally sick people shouldn’t reproduce, No other religions except those who don’t live there simply the world is big enough for the rest so leave at least this small piece of world unique ?…)

Ramadan 2018 in Idlib caliphate – The paradise for the Muslims, expanding and remaining. The original vision of ISIS ideals of Muslims living in peace and justice without disbelievers. https://youtu.be/sTxvdBA2XXI?t=2m11s

That’s good, real good but is there any guareantee of peace and the damn Assad not killing all with his Rus allies again? This war killed enough people and im tired of all this. What if it’s only trap to lure all muslims into one place, and then kill them all with the bombs and airstrikes? The people curse Assad anyway so he is not going to care about killing hundreads of thousands more. I left my country, i left Idlib and now i feel that i betrayed my own people, my own blood and i feel like i made greatest mistake in my life but i don’t want to be killed here by the airstrikes. I don’t even have much internet access here in Deutschland and im scared to write anything because i may be target of the spying for obivious reasons.

Then don’t act like an Al Qaeda stooge as the internet is constantly watched in Germany and Europe all watch words are tracked. Well all that is left are western backed Foreign terrorist groups formed of Muslim Brotherhood,Wahhabi and Salafi radicals. Personally want all of them purged off the face of this planet and I am a nice person.

Yes i know i’ve been warned by the local muslims. Are you joking, right? I have nothing with Al-Qaeda since the beginning, i’m with the Syrian Free Army (FSA) which is moderate, not wahhabi and not Salafi. And I’m nice person to sane people too.

You keep trtying to hide all the largest groups still remain largely sectarian even your belief of calling Shia Mushireek Takfeer puts you into that sectarian place. You can’t hide your true colors as sectarian they always show, may the Pbuh and Allah forgive you ameen.

I’m not trying to hide anything i openly stated it, only beacuse i believe that it is the truth. This has nothing to do with lSlS or Wahhabism read verses 5:54, 33:60, 33:61 for example. https://youtu.be/U7G4xCR9ewY

They have many whom are like that in all religions as this is a way of showing penance to God and the Cleric I don’t like as he promotes hatred with his ignorance and arrogance. I would not follow his rantings as he sounds more shirk under the old teachings which forbade anyone to act like or follow in his earlier behaviors of the PBUH when he wasn’t a wise man nor to write or preach about it.

Youll be target for a fycking beating you takfiri coward.

No muslim wants you none.

HTS’s political strategy seams to be the same as Hamas’, diverting the rivalries and discontent in a splinter army/city away from themselves and towards a common enemy. Which mean border skirmishes will continue for years if not decades.

There is clear message for various groups of mujahedeen, if you stand for your people unite together and form single entity no matter how it is going be called as long as it aims on the establishment of the Islamic state and implementing shariah. There need to be a Islamic constitution to form the clear ideas together and build a successull Islamic society on top of that. There is no need to copy “civilized” countries, there is no need to legalize mental illnesses such as homosexuality. We will simply have our own state isolated from rest of the disbelieving world which clearly stepped into error.

Unity? You’re an Arab, you don’t know the meaning of the word.

Sound like you know nothing as there is likely even more agents of Syria within these groups , Just like Jewish reporter who dealt with 3 whatsapp FSA groups in southern Syria turned out they were Air Force Intelligence groups, so funny!

You are mistaken about this lasting years in Idlib as we know only the Turks showing their hand now would force them out of Syria and that would be the quick demise of these groups backed by Turkey. So you will see a withdrawal back to Afrin and Northern Aleppo not hard to see also a withdrawal from Manbij and US agreeing with Russia to withdraw from Al Tanf and Northern Syria and Manbij.

One might see Tutrkey and Iraq fighting soon even NATO sees this will be bad for them and Turkey. All ISF(PMU) are working to eliminate ISIS cells as fast as possible and next is Turkey and NATO to leave Iraq so far NATO is slowly withdrawing especially the US warned about it happening now EJM is only twigging to it now and Dinucci some people always are late to the party.

which cloud ☁️ you on ?panda force will fight Turkish force? that’s end of Syria

Turkish forces are ready to withdraw as Russia now has the US willing to attack Turkish forces in Syria as Erdogan has become a tool no one can control. Good bye Turkey and it’s Salafi Neo Otto-turk dreams ansd you now know why the meeting is about, US is accepting Crimea and will negotiate the division of Ukraine. Pompeo is negotiating with the Taliban and will make war on Al Qaeda and ISIS in Afghanistan.

A win win for everyone. The terrorists get their martyrdom and the Syrian people are rid of a few more as*holes. Keep up the good work!

Another wave of mujahedeen entering the Idlib i cannot describe the joy i feel now, these people mostly from ISIS and their families are getting second chance to fullfill their mission on this dunya and to help others from going astray. O brothers in Islam be truthful. https://media.giphy.com/media/X8WP9pkFuhsXDx4zLC/giphy.gif