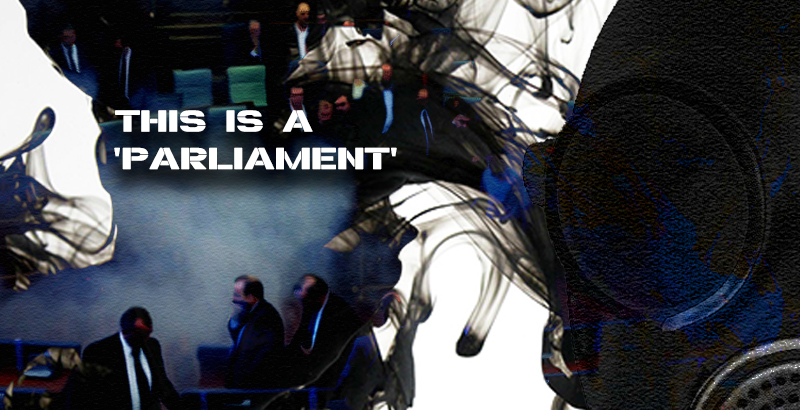 The Prime Minister of the so-called Kosovo, Hashim Thaci, and his deputy, Isa Mustafa, condemned the behavior of the opposition and said that the government may have crossed the “red line.” The opposition has blocked the work of the Kosovo parliament when tear gas was thrown into the hall and ministers got sprayed with pepper spray.

The session was continued in another room. Parliament adopted draft of the Budget Law for 2016.
After a short lull, the clash between the police and demonstrators in Pristina resumed. Protesters threw a red paint on the police, so police responded with tear gas, reported “Kosova Press.”

After the interruption, session continued in the second hall, and the Kosovo Assembly approved the proposal of the Budget Law for 2016, with 71 votes for, one against and seven abstentions.

The bill is supported by all political groups who participated in the work of today’s General Meeting, which took place in a side hall, because the opposition set off tear gas in the main hall earlier.

The session was not attended by deputies of the opposition party Self-Determination, the Alliance for the Future of Kosovo and the Initiative for Kosovo.

The opposition again attempted to enter the room during the session, and since they did not succeed, they activated tear gas in the corridor.

Epistle of the radical opposition movement Self-Determination leader Albin Kurti said that he sprayed the pepper spray in the direction of the prime minister, Isa Mustafa because of the agreement on the formation of Serbian municipalities, “Koha” reports.

I sprayed in the direction of Prime Minister because they formed the ‘Community’, but the police got in the way,” said Kurti for Reuters.

Prime Minister of Kosovo, Isa Mustafa said in the continuation of the Kosovo Assembly that the work of Parliament can not be blocked because of “three or four individuals.”

Mustafa said that such actions of individual members is an “act of violence” and that those who do so should be prosecuted.

“I express readiness of the Government of Kosovo to implement the law. If the highest institution is under attack, it endangers the functioning of the state”, said Mustafa.

After that, the Minister of Finance, Avdullah Hoti began to elaborate the draft of Budget Law. Session of the Assembly of Kosovo was interrupted today, because deputies of the opposition movement Self-Determination who threw tear gas.
President of Parliament, Kadri Veseli then convened a session of the Assembly at which it was decided to continue work in a side hall on the fourth floor. The topicof the General Meeting of the so-called Kosovo was the Budget Law for 2016.

After the opposition set of tear gas in the parliament, police completely sealed off the second floor of the building.
Earlier today, at a time when the Kadri Veseli, opened the session, opposition lawmakers surrounded the rostrum, and then a dozen of security guards entered the assembly hall.

While the head of the parliamentary group of the Democratic Party of the so-called Kosovo Adem Grabovci tried to say that the meeting is to be held, a former leader of the Self-Determination Movement, Albin Kurti used the pepper spray in direction of security and ministers of the Kosovo government.

At the same time some of the opposition deputies threw tear gas into the assembly hall.

Parliament Speaker interrupted session, gave a break and invited heads of parliamentary groups to a meeting.
This incident is the fourth within two months from when the opposition is blocking the work of the Kosovo Assembly, demanding the abandonment of the Agreement on the community of Serbian municipalities, as well as the demarcation of the border with Montenegro.