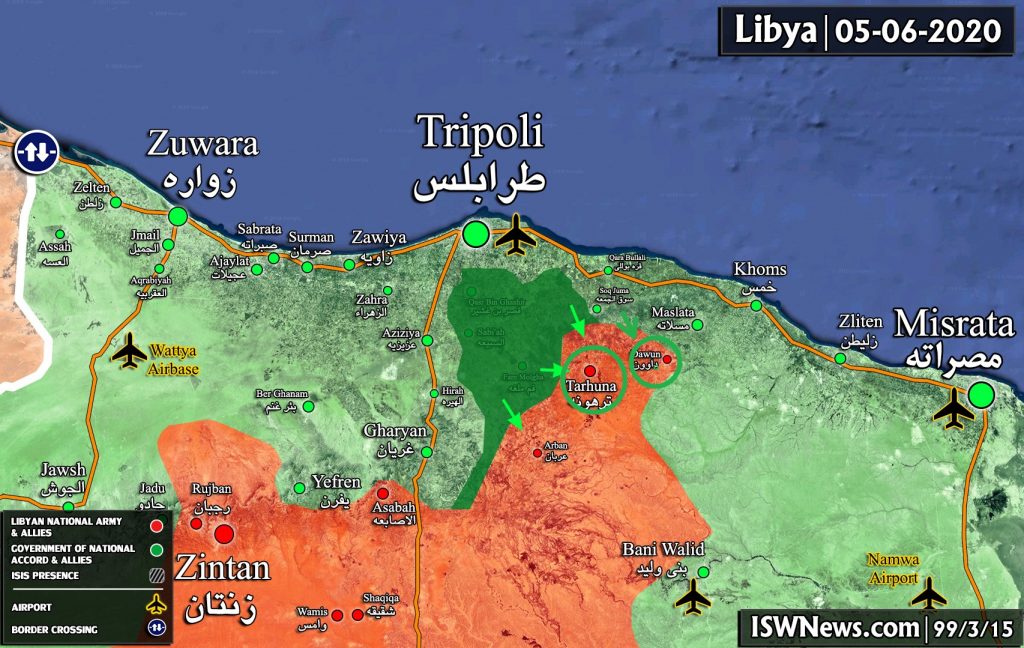 The defense of the Liyan National Army (LNA) in southern Tripoli continued collapsing after the retreat of the LNA from Tripoli International Airport.

Forces of the Turkish-backed Government of National Accord and pro-Turkish Syrian militants with a direct support from the Turkish military captured the town of Tarhun, the village of Dawun and several nearby points from the LNA. With this advance, they in fact put an end to the LNA siege of Tripoli.

Turkish proxies are in Tarhuna:

Turkish-led forces captured a large number of various military equipment and weapons in the areas abandoned by the LNA.

GCC countries are responsible for all terrorism problems.Hope turkey captures them.

Wait now that tarhuna and the airport is in the gna hands what will lna do now?

So turkey want the Salafi terriost to take control of Libya. Turkey is poking finger in every country.now. Turkey also want to send Terriost to Yemen to help islah party salafi movment to fight Houthis and this will be big mistake by turkey bcuz it will make turkey against iran.But houthis alone will target Turks direct if they mess with yemen,Houthis.

Salafi terrorists are fighting on the side of Haftar. UAE propaganda at its best. Madkhalis and janjaweed extremist terrorists fight for Haftar.

Shut up stinking majoosi Tomblicker. Your mouth stinks of dead shiite corpses. And no, you aint gon do nothing, because you will be decimated if you go to war against muslims. Besides that, first protect yourselves from being evaporated by jewish warplanes on a daily basis in Syria before you talk about going to war against Turkey

So you fighting in Syria, Lebanon, Libya Iraq against muslims are good fights? Dumb graveworshipping monkey. We will teach you graveworshippers a tough lesson for all the muslims you have killed in past 15 years

You shiites are always going to war. Not against Americans, or Russians or jews…but your first enemies are muslims. You are being killed in a daily basis in Syria by zionists FOR YEARS! HAHAHAHA and in all those years you didnt fire even one bullet at them. But you act strong against muslim children wich you bomb in their schools

Kill all Russian dogs who are in muslim lands only because of their hate for muslims and to kill muslim children, women and other defenseless people without impunity. Dont show mercy to these rats. They have nothing to look for in a country 8000 kilometer away from their home while Libyans never did anything to Russians to deserve being killed by these statue worshippers