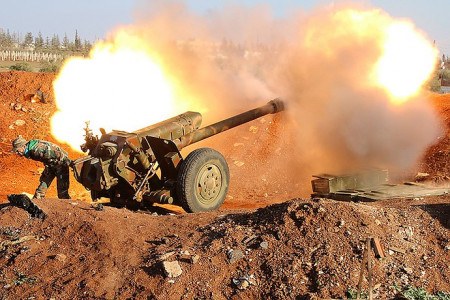 It appears that in the next few days, the focus of combat operations will shift to the desert-like terrain on the boundary between Homs and Raqqa provinces.

The federal road to Raqqa is barricaded with stones. Further progress is impossible, so we drive off the road into clouds of dust. We try to look around and make sure we haven’t lost our guides. The jeep is covered in “people’s camouflage”–the vehicle is hosed down with water, then covered with about a dozen shovelfuls of sand dust. Ten minutes later, the cold sun has dried the mud and the car becomes a self-propelled sand dune that can be spotted visually only with difficulty.

The last outpost on the front line is an empty technology park with a dozen cell phone towers, a gas pumping station, a pool, a few pines. It’s a genuine oasis to a tired traveler. Militants shell it with remarkable regularity, and the pines bear shrapnel marks from the explosions. It’s painful to walk over knocked down branches, particularly once you realize how difficult it is to grow a whole stand of trees in the desert.

Once at the observation post, we look through an x12 rangefinder. Syrian recon troops say they know the forward edge of their positions like the back of their hands. Directly ahead is a hill with a white top. We look closely, and suddenly we see a carelessly dug-in cannon and a pick-up truck with a machine-gun mount sticking out from behind a house–a key weapon system in flat terrain like this.

–Not much activity there, the scouts tell us. They will jump out from behind the hill, give us a few machine-gun bursts. Nothing more.

The militants have sensed something, they are keeping low and saving ammunition. According to the scouts, the desert between here and Raqqa is dotted with fortified positions. But most of them now stand empty. The militants will occupy them as they conduct a deliberate retreat. They don’t seem to doubt the Syrian army will push them out of their first line of defenses. But they hope that they will able to draw government forces into a prolonged battle of attrition in which the offensive will bog down. The aim is to gain time. There’s the haggling over the ceasefire, the to-and-fro of politicians. They still have a few reasons for hope, even though Bashar Assad clearly stated in his most recent interview that “the negotiations are no reason to stop liberating captured territory.”

The offensive, judging by the extensive preparations, will be accompanied by fire support from every available weapon: D-30 howitzers, tanks, multiple rocket launchers. On this sector of the front, the army will advance from the South, while another force has already began pushing against Islamist positions from the West, from the direction of Aleppo. Raqqa will be trapped in a vise from which the only escape will be toward Iraq.

Syrian Democratic Forces Are In Final Of Battle For Raqqa