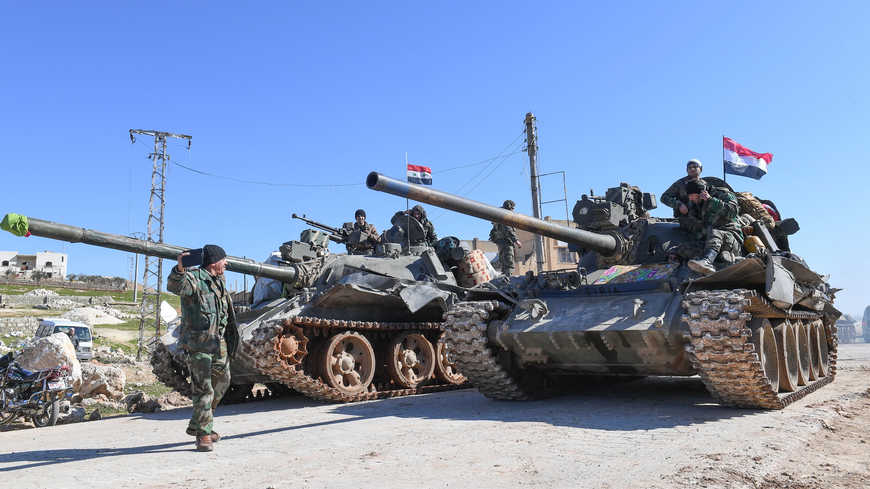 All the talk about a possible truce with terrorists active in the Syrian province of Idlib means surrendering to them and encouraging them, Russian Foreign Minister Sergey Lavrov said at the 43rd session of the United Nations Human Rights Council in Geneva on Tuesday.

According to him, the international community and the Human Rights Council need to create a barrier against extremists because some forces tend to justify the atrocities of radical and terrorist groups.

“Otherwise it is hard to explain their statements about a possible truce with bandits, which are made during discussions of the situation in Idlib,” Lavrov pointed out. “It has nothing to do with concerns about human rights, it is a surrender to terrorists, which would encourage them to continue blatantly violating universal conventions and numerous United Nations Security Council resolutions,” the Russian top diplomat added.

Lavrov expressed serious concern about attempts to use religion in geopolitical games. “Religious divisions are growing, sacred sites are desecrated in various parts of the world in increasing numbers. Believers and priests are attacked, persecuted and killed,” he specified. “The number of Christians has dropped in many Middle Eastern countries or even disappeared, while it is the land where Christians lived for centuries,” the Russian foreign minister emphasized.

The situation in the Syrian province of Idlib escalated in early February after the Russian and Turkish militaries had made another attempt to ensure a ceasefire. In response, terrorists scaled up attacks. The Syrian army took action against extremists.

Lavrov said earlier that Moscow would “strongly oppose” attempts to justify the activities of terrorists.

totally agree with Lavrov….BUT BUT ONLY ONLY

why then did treacherous Zionist fuck Putin make DOZENS of ceasefires with AL NUSRA HTS in Idlib????? why then did treacherous Zionist fuck Putin make the BS “deescalation” Agreement with the number one Sponsor of sunni terrorism in syria, namely TURKEy ??? why then did Putin allow Turkey to invade afrin, later Idlib and finally North east syria knowing full well, that Turkey is the state through which 99% jihadis come to syria, Turkey still is buying the stolen oil from their “ememies” SDF, before they bought it from ISIS…and Turkey intelligence is directly involved with HTS, Turkey is supplying weapons, ammo, Military Hardware,UAV´s, medical help directly to HTS..????

Barba_Papa
Reply to  klove and light

THE PLAN WILL PROCEED REGARDLESS OF YOUR FITS,ERDO AND PUTIN IN CONTROL,NOT NWO NOR INCEST SPAWN CIAS NOR EU-EPP,NOR TYRANNY!

Notice the difference between Lavrov and Pompeo. Both are politicians so they obviously lie. But Lavrov lies by reframing the discussion with facts. While Pompeo is just a pompous ass. Well named in fact. Who talks out of his ass.

Sergey Viktorovich Lavrov is a profession Soviet/Armenian diplomat and now represents the Russian Federation to the best levels of professionalism. Pompeo on the other hand is a blowhard thug and has very low veracity or understanding of diplomacy and soft power projection.

That’s because in the US, and in a lot of Western countries too I’m sad to say, diplomacy is a forgotten art form. Replaced by the quick and easy seduction of using military force, sanctions, threats and ultimatums.

As that admiral in Star Trek Picard (a shitshow if there ever was one) said, sheer fucking hubris!

Your comment “But Lavrov lies by reframing the discussion with facts.” is inaccurate in my opinion ,Barba.

I would say that ‘ But Lavrov EXPOSES lies by reframing the discussion with facts.’

I hope that this is the meaning that you intended to convey, Barba.

Are you worried that he didn’t?

Lavrov is still a politician, and they lie by default. He just lies intelligently, mixing truths with omissions to make his case look better and more reasonable. That’s why he comes across as reasonable. But he still lies just by opening his mouth. I have no illusions whatsoever regarding politicians, ESPECIALLY the ones that are in positions of power.

We will have to agree to disagree with regards to Mr Lavrov, Barba.

I trust his statements as being logical and factual in the world as it is and not what the US Coalition of Terror want it to be.

Fair enough. And I do enjoy it when he uses logic and facts to tell a different narrative.

And Mr Lavrov’s narratives are far more logical,in my opinion, than the Micky Mouse ramblings that emanate from Western diplomats.

In fairness, the Western Diplomats are in a difficult situation when they attempt to justify their propaganda lies. Muppets such as Pompous Pompeo are not intelligent enough to promote lies with any verisimilitude and credibility.

Where did he lied? I dont see any lie at all..

I’m of the firm opinion, having been on this world for many decades now, that all politicians lie. Even the ones you like. Probably especially the ones you like as they are better at it. That’s why you like them in the first place. Lavrov, as the Russian foreign secretary, has to tell a narrative that A: represents the official Russian narrative, and B: persuades others that the official Russian narrative is the correct one. And as a diplomat he has to do it in such a way that those same people think they reached that conclusion of their own free will. As part of that process one has to lie, either by telling falsehoods, distort the truth or omit or embellish those facts that are either very disadvantageous to your own narrative or which enhance it perfectly. And do it better then the other side does.

So no, I don’t see any blatant lies in this article, and I do like Lavrov, but he’s also a diplomat and politician, so he does lie. But I’m a cynical bastard.

“But I’m a cynical bastard”, that’s exactly what you are:)))) and you use exactly the same rhetoric with Lavrov when you put the adjective cynical in front of the bastard as a kind of euphemism ! Your many decades on this world allows you to use your wisdom in manipulating the meaning of words in line with your perspectives !

Sigh. The youth is always so eager to believe. And always so black and white in their beliefs. Whereas I, a cynical bastard with decades of having experienced one lying politician after the other only sees shades of grey. Lavrov lies, because all politicians do. Do I worship the sun shining out of his ass because he happens to tell lies that I like to hear? No. Do I respect the man for his skills in lying and diplomacy? Fuck yeah! That was the whole point of my original post. Lavrov lies skillfully, Pompeo just farts out of his mouth. There is no skill there, no beauty to his lies. There is just a fat lazy bastard who lies with contempt for his audience. And that is why I admire Lavrov. Even though he lies too. After all, he’s a politician. But he does it with skill and elegance. And that I, a cynical old bastard, can admire.

Yes, anything a politician or bureaucrat says to the public is meant for public consumption, and is crafted with at least some measure dishonesty. It’s a necessary evil; at best it’s something similar to a a card player who misleads other players with his demeanor. At worst it’s Big Lies like what the Washington beltway bandits typically issue forth.

Tovarish Lavrov is on the right track now as Russia and its allies have to finish off the terrorists and liberate all of Syria, once and for all. The Turks also need to understand that they are backing a lost cause and should not fall for US insidious agenda of endless wars which will not benefit Turkey or anyone.