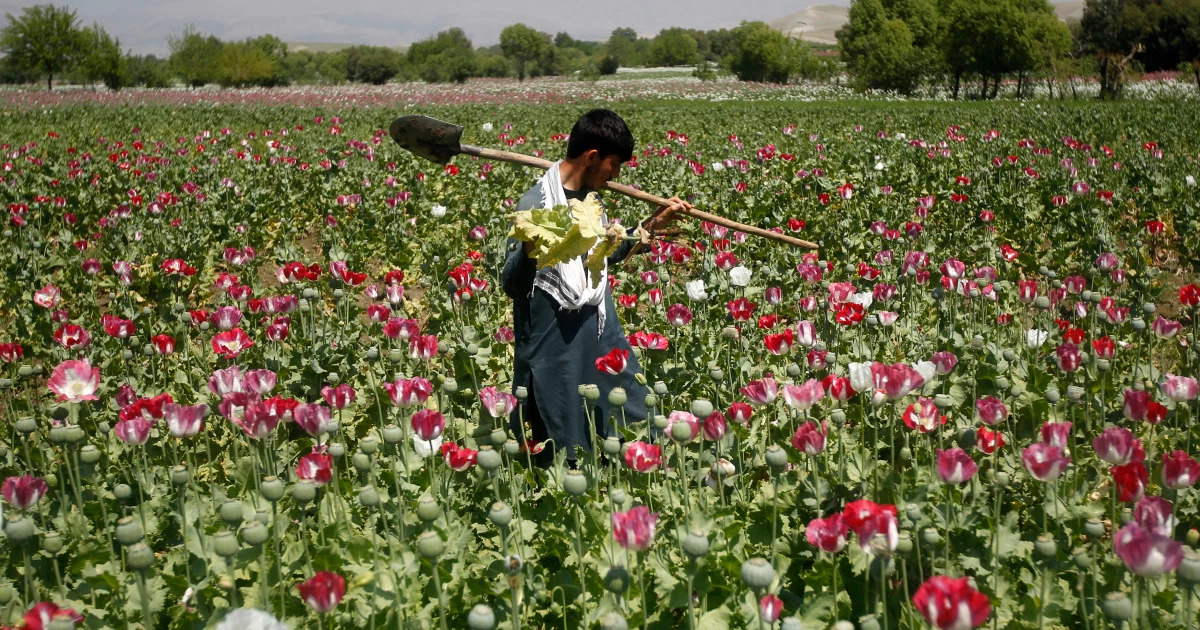 The Taliban have vowed to reduce Afghanistan’s opium trade, according to a report by the WSJ.

This is incredibly suspect, as the movement’s primary bankrolling comes from poppy growing and opium production.

The Islamic group’s spokesman Zabihullah Mujahid vowed to crack down on the production of narcotics, saying “nobody can be involved” in the heroin trade.

Taliban leaders have been telling farmers in the southern province of Kandahar to stop cultivating opium poppies, according to the WSJ report.

Farmers are unhappy but have no choice but to comply should the Taliban begin to enforce the ban, the outlet cites a Kandahar grower as saying.

“We can’t oppose the Taliban’s decision. They are the government,” said the farmer.

He added that the Taliban has assured people that they would have an “alternative crop,” such as saffron, to grow.

The ban on a crop that has traditionally been a crucial part of the local economy has resulted in prices of raw opium skyrocketing across the country.

Local farmers in poppy-growing regions like Kandahar, Uruzgan, and Helman provinces said raw opium prices have tripled, from about $70 to about $200 per kilogram. In the northern city of Mazar-e-Sharif, the price of opium has doubled, according to locals.

The poppy-planting season is due start in about a month.

“If the Taliban prohibit the cultivation of poppy, people will die from starvation, especially when international aid stops. We still hope they will let us grow poppies. Nothing can compensate for the income we get from growing poppies,” a poppy farmer in the Chora district of Uruzgan was quoted as saying.

Afghanistan is the world’s leading producer of opium, with its share in the global market standing at over 80%.

Poppy cultivation offers the rural population in the war-torn country a much-needed lifeline. In 2017, annual opium production was valued at $1.4 billion, or 7.4 percent of Afghanistan’s gross domestic product, according to the UN.

The Taliban have used taxes on the drug business to bankroll they endeavors for a while. After seizing the country’s capital Kabul, the issue of the narcotics trade surfaced amid the Taliban’s new plans for governance.

“We are assuring our countrymen and women and the international community, we will not have any narcotics produced. From now on, nobody’s going to get involved (in the heroin trade), nobody can be involved in drug smuggling,” Taliban Spokesman Zabihullah Mujahid told reporters in Kabul at an August 18th press conference.

Before 2001, when the US invaded, Taliban had banned opium production. Production was down by 90%.

The Taliban eventually ceased to mete out punishment for cultivating drugs, cracking down only on use of drugs.

After 2001, during the two decades of deployment of Western forces in the country, the US spent some $9 billion in a crackdown on the drug trade. US efforts included paying farmers to destroy their poppies, funding Afghan eradication teams, and urging people to grow saffron, pistachios, or pomegranates instead.

This, however, pushed many of the local population to join the Taliban’s ranks.

The ban on the opium growing is a risky move, as the country is in an economic crisis, and a precarious one at that.

The US froze Afghanistan’s central bank assets and foreign aid, as well as the local currency – the afghani is reeling, on the brink of collapse.

Stopping the drug production and trade could be used as a bargaining chip to receive funds, and have resources released to be used by the Taliban government.

They got no other export, if you don’t count wahabbi sunni dalit doctrine……however with that soweet ass Fentanyl, and high grade Chinese meth, the demand for heroine is indeed low.

really muhammad? you think I’m hendi and live in Amsterdam?….lol

If demand is so low, then why is it still so profitable? In any case, less poison going into people’s veins is always a good thing.

Opiates are not poison. We have receptors in the brain for this chemical. Proper use of opiates Is essential for maintaining good health and long life.

Hey, fuck you with a cactus. People are killing themselves with this shit, and you’re happy about that because they’re Americans? They’re people, just like you, people who have made bad decisions and need help getting a monkey off their back, not the society of devils that you’ve conjured up in your diseased mind. How about having some motherfucking empathy instead of letting your anti-Western ideology overshadow what little is left of you humanity?

People are killing themselves mainly with fentanyl.

Why is it suspect? they did it last time they were in power,the people would be better growing food produce.the US drug cartel won’t be happy.

As I recall on a contrary, poppy production rose from very low to skyhigh for past 20 years.

Or the Taliban could just demand that the US return their gold holdings.

I’m guessing that the security bill for squaddies and grunts to actually protect the poppy crops from destruction was included in the $9 billion the US spent on the crackdown. This crackdown must have been very profitable for some.

It’s not suspect. They did it before. They’re people of principle. Profit-driven people will not understand. There are plenty of alternatives. Especially cooperation with Russia and China and also Iran will recompense. Russia and Iran have a massive Heroin problem and will therefore provide incentives to the Taliban to curb opium production. I don’t have much info on China, but there might be similar problems there.

“The Taliban eventually ceased to mete out punishment for cultivating drugs, cracking down only on use of drugs.”

Just goes to show how corrupt the Taliban are.

The Taliban dramatically reduced opium cash cropping circa 1999-2000. Their reliance on it only came after 2001 US invasion. It became source to finance insurgency war against US occupation and US appointed governance. But that decision was based on who the US Afghan allies were – the old Northern Alliance – who became the government and were always heavily involved in narcotics. US’ first Afghan Presidential pick Hamid Karzai’s brother was the biggest narco-lord in Afghanistan, post US invasion. Which US was more that aware of, as he was on CIA payroll. That has long been published as public record, to say he was government protected would be an understatement. Thus, for the Taliban their previous disdain for addiction and trafficking was rendered pointless when the new government was bound to the biggest supplier and dealer in the country. But the question now is, how much the new generation of Taliban leadership have gotten used to the power and income of narcotics vs the hard-line disapproval over narcotics of the older generation Taliban leadership? It remains to be seen.

That would be a stupid move.That is a huge source of income. What else can the Taliban do to make cash?

Before US invasion Afghanistan opium production was about 10% of global trade. Enough said.