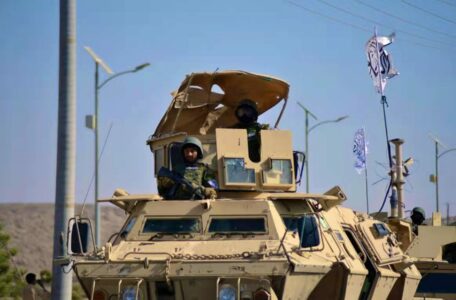 The Taliban on Tuesday inaugurated its “Islamic Emirate Army” in the large city of Kandahar in Afghanistan’s south by showcasing a lengthy parade of armored vehicles taken from US and NATO forces.

While it’s not the first time since conquering the country in August amid the rapid US troop withdrawal that the Taliban has held military parades touting its newly acquired Western hardware and weaponry, the Kandahar parade did appear to involve the most US-supplied vehicles ever on display at once.

Helicopters could also be seen flying overhead, suggesting that the Taliban has to some degree resolved its lack of pilots problem. The Pentagon in its earlier evacuation said it attempted to destroy and disable many aircraft it left behind, but clearly they didn’t get to everything.

According to the AFP description of the event which featured what looked like hundreds of US military vehicles in a line that stretched as far as one can see:

A convoy of military vehicles drove down Kandahar’s main road, which links the airport to the city center, past onlookers while religious music blasted from loudspeakers. The Taliban defense minister recently announced military units would be reorganized and renamed.

#Taliban release video of their military parade in Kandahar, #Afghanistan‘s second largest city and the Islamist group’s birthplace. Military vehicles and helicopters of former Afghan as well as US-led foreign troops were used in the event. pic.twitter.com/slriGBko9F

Also on Tuesday the Pakistani government and a local Taliban group have confirmed a ceasefire that could see the notoriously restive Af-Pak border area eventually become more stable. Pakistan’s Information Minister Fawad Chaudhry initially announced Monday a “complete ceasefire” with the group known as the Tehreek e Taliban Pakistan (TTP), which is based in South Waziristan.

As CNN reviews, “The TTP is a banned Islamist group that is responsible for some of the deadliest attacks in Pakistan’s history, including an assault on an army-run school in 2014 that killed 132 children, as well as the 2012 attempt to kill schoolgirl Malala Yousufzai, who became a Nobel laureate and education rights activist.”

Nice! How the faq does one stop a helicopter dive, a humvee crash-bomb, or an airplane twin tower express? Good going there US army. lol

2021 is the year that jihadists are not fought. Turkey, Iran, Pakistan and other countries don’t fight against jihadists anymore. They are their allies against the West. And the West is ruled by hypocrites.