In January 2018, Taliban fighters conducted 853 operations including 6 suicide attacks against the Afghan Army, Police and the NATO, according to an infographic released by the Taliban news agency Voice of Jihad on February 4. 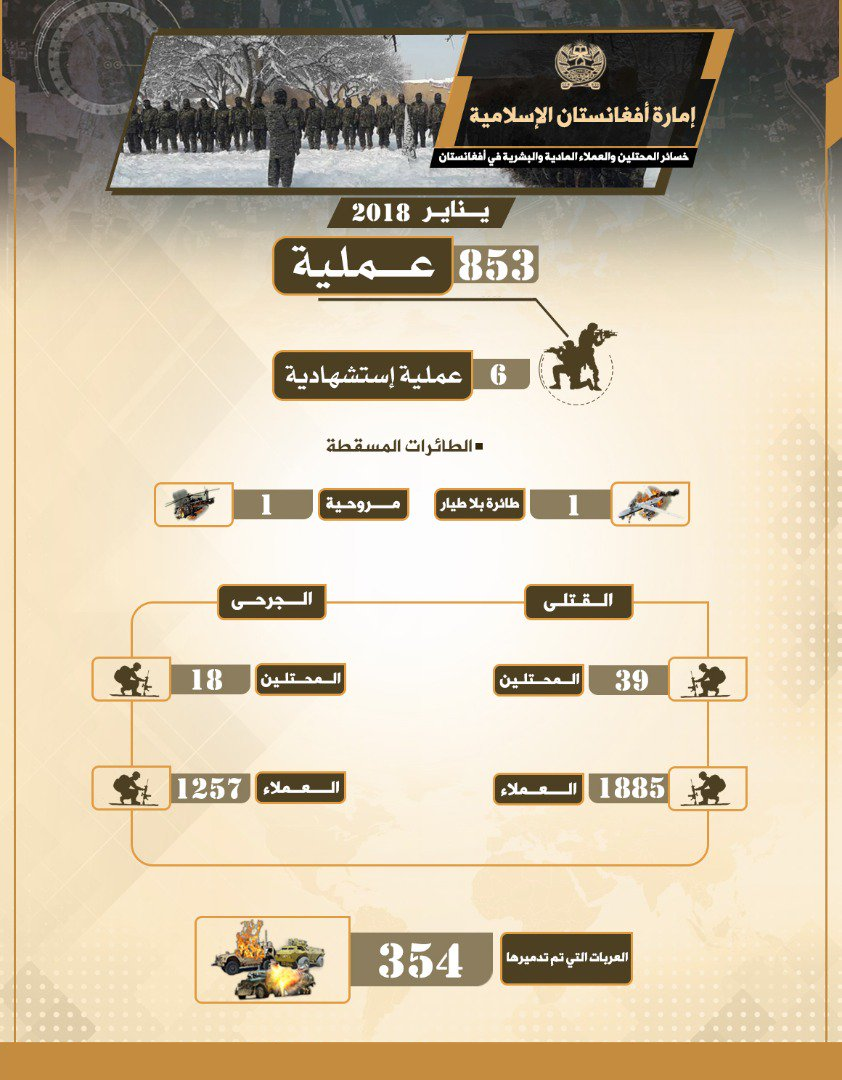 The Taliban also claimed that 39 service members of the NATO were killed and 18 others were injured by its fighters in January. However, the NATO has not reported about any casualties in Afghanistan since the beginning of 2018.

Moreover, the infographic shows that the Taliban allegedly shot down a UAV and a helicopter of the NATO without mentioning when or where. This indicates that these claims are also false.

It’s well-known that the Taliban news agency exaggerates the loses of the Taliban’s enemies. However, the Afghan Army indeed lost hundreds of its soldiers in January 2018. In the western province of Farah alone, the Afghan Army and Police lost over 100 of their service members during the last week of January, according to Afghan sources.

Won’t be long and the Taliban take over the whole of Afghanistan, maybe that will learn the US to stay home for once.

Gℴℴgle offereing to people of all ages $98/h to complete some internet services from home .. Do work only for few peroid of time daily and stay more time together with your own family … Anyone can do this easy work!!!last Tuesday I got a gorgeous Car after just getting $14625 this-past/five weeks .it’s really the easiest job however you can now not forgive yourself if you don’t see this.!xx203e:⇒⇒⇒ http://GoogleDirectoryLegitimateFreelanceEasyJobs/getpay/98$/per-hr… ♥x♥♥♥r♥j♥f♥♥j♥♥v♥♥k♥♥♥l♥♥♥m♥x♥♥p♥♥w♥s♥l♥♥♥t♥♥♥w♥m♥♥♥u♥♥♥a♥u♥♥j♥y♥d♥u♥i:::::!nx46g:lwuwu