After more than 10 years of bloody battles for the Afghan town of Sangin, the NATO forces and the Afghan Army retired, leaving the settlement to the Taliban. 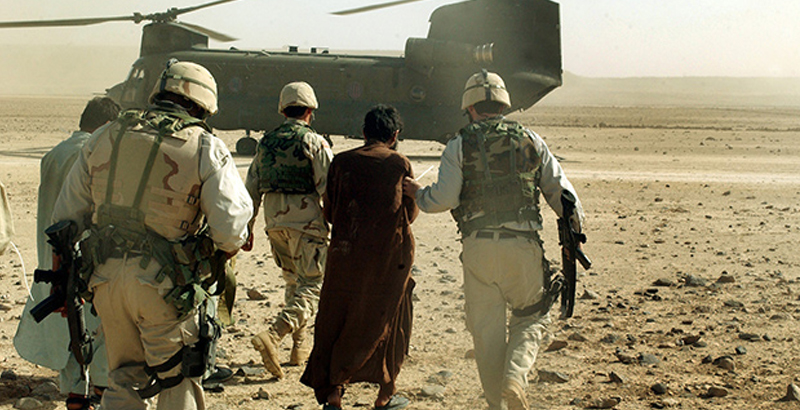 US servicemen with a detainee during a raid in Sangin, 2003 (Photo: Reuters / Jim Wagner)

A long and bloody battle for the small town of Sangin, located in the south of Afghanistan, has been completed. The UK and US forces suffered the biggest losses in the entire campaign on the country’s territory, and it was in vain – in the end, strategically important “bloody Sangin” town, as it was nicknamed in Western media, fell into the hands of the Taliban.

Sangin town, the capital of a district in the province of Helmand, fell on the morning of March 23 without any battle – US helicopters took out remaining defenders under the cover of darkness, the evacuation was covered by the US Special Forces. Now, the remnants of the Sangin’s garrison, fighters of the 215th Maivand Corps and policemen, are on a fortified base, located three kilometers from the town.

According to official spokesman for the Helmand authorities, Omar Zvak, this was only a “tactical redeployment,” undertaken in order to avoid civilian casualties. Zvak also noted that soon the Afghan Army would recapture Sangin.

However, these statements sound enough unrealistic, as immediately after the garrison’s evacuation, the US Air Force carried out an airstrike on the town in order to destroy defensive positions and military equipment that remained there. According to the US side, almost all ammunition and weapons have already been taken away. The airstrike was carried out on an abandoned police building and fortifications.

At the same time, Talibans claim that they managed to seize rich trophies, while US bombs and missiles hit mainly residential buildings.

Sangin town is located in the so-called green zone – the fertile valley of the Helmand River. It has an important strategic role, as the 661 highway passes through the Sangin valley and provides access to opium plantations and the Kajaki dam, which is critical for irrigation of lands and energy supply in the north of the province. In addition, control over Sangin facilitates a maneuver of the forces in any operation in the northern part of Helmand.

But the most important fact is that the Sanginsky valley is one of the opium production centers and a key transit point on the drug routes of Central Asia. Peasants from the surrounding villages brought their harvests to huge annual opium fairs in Sangin. From here the drug went to European markets. Those, who controls Sangin, gets a great part of proceeds of the local drug trafficking.

In addition, the valley is impregnated with blood of Afghans, Britons and Americans, who had been fighting and dying there for more than ten years. For NATO soldiers and the Afghan Army, the fall of Sangin is spittle on the graves of brothers in arms, who gave their lives to ensure that the Taliban’s white banner never rose above this land.

Sangin’s population has traditionally been supporting the Taliban. Even after the Taliban regime fell in Kabul in 2001, government troops preferred not to go to the valley.

In 2006, Afghan President Hamid Karzai convinced then UK Prime Minister Tony Blair and his generals to finally clean out Sangin – 3,300  British troops entered the valley. The military planned to establish control over the valley, as well as to build friendship with local population and persuade them to abandon the cultivation of opium in exchange for grain and subsidies.

About 120 British Marines and local police found themselves in a complete blockade in the town. They ensconced in a bazaar in the center of the town, building fortifications of sandbags and barbed wire, and were repulsing continuous Talibans’ attacks during a month. Food and ammunition were delivered by helicopters, but sometimes the fire from the ground was so strong that the deliveries were interrupted for almost a week. The policemen, who could not withstand the tension of the battle, deserted to the Taliban, telling them about plans of the Britons and the configuration of their positions.

The blockade was broken through only a month later. Officially, the battle was won in April 2007, but in fact the mine war continued. The Britons lost 106 people for three years in Sangin – a quarter of all their losses during the Afghan campaign. The Sangin area cost for the British Army at times more than any of the other 397 Afghan districts. However, all the victims were in vain. The local authorities did not intend to destroy the opium plantations. “The police in Sangin are a drug militia belonging to one tribe, and the Taliban are another drug militia. Whoever controls the Sangin bazaar is able to tax the drug crop. Hence why people fight for control of the bazaar,” Mike Martin, a British Army captain, said.

In 2010, the zones of responsibility were shared once again, and Sangin was given to the US Marine Corps, which concentrated a large group of its forces in the area and launched an offensive. Firepower and good preparation played its role. Talibans were thrown out of the valley, however, 55 US soldiers were killed and hundreds of others were wounded in the battle.

In 2011, the Marines left the area, transferring their positions to units of the Afghan Army, and Talibans returned. The battle started again. The number of losses exceeded several thousands.

Up to a certain time, the situation was saved by urgent redeployment of NATO soldiers. So, in 2013, Talibans almost captured Sangin, when Afghan soldiers started to panic and fled, abandoning weapons and ammunition and leaving their fortifications, after another attack on a checkpoint. The panic ceased only with the arrival of the UK and US Special Forces.

Ultimately, the Sangin’s fate determined at the end of 2014, when NATO withdrew the most part of its forces from Afghanistan. Next year, the Taliban cut off the 661 highway, the only road leading to the city. The last two years, Afghan soldiers had been fighting in the siege, getting reinforcements, ammunition and food from the air.

Two months ago, it seemed that not everything was lost. On February 1, the Sangin garrison, backed up with from the air, managed to repulse another attack of the Taliban. Afghan Prime Minister Abdullah Abdullah, who arrived in the Helmand’s capital of Lashkaragh, promised a major offensive and ordered the security forces to liquidate the Taliban in the province before the beginning of the spring.

However, the assistance did not come. When the US Special Forces evacuated the remnants of the Sangin garrison, only eight policemen and 30 soldiers were holding the defense.

Now, troops of the Afghan 215th Corps are deployed three kilometers from Sangin, and politicians in Kabul demand from them to launch an offensive. A Sangin’s representative in the Afghan parliament, Muhammad Hashim Alokazai, said that the military should return the region as soon as possible, otherwise the capital of Helmand, Lashkaragh, as well as the entire province, would be lost.

Now, Kabul’s strategists and their Western advisers have to make a difficult decision: to dispatch all their forces to Sangin and try to recapture the town, uncovering other directions, or to focus on the Lashkaragh’s defense, which will be much harder to be held without Sangin.

The Americans also face a difficult choice: either to strengthen their presence, or to leave definitively. In February, Commander of the US forces in the country, General John Nicholson, said that the situation had reached a deadlock, and in order to achieve a turning point in the fighting, it is necessary to dispatch several thousand people to Afghanistan.

Leave. I wouldn’t allow a single migrant from Afghanistan into a western country unless Christian. Let the others live in the hell they created. Also, let Westerners have all the heroin they desire in a putrid on and cremate them upon their death.

They created? Are you absolutely retarded??? Who created the mess in Afghanistan? Yes that is right, the US did.

Actually the UK did, the UK has had occupying solders in Afghan almost non stop for hundreds of years… If you read a book instead of watching TV. The UK has been controlling drug production in Afghan since the 1700’s The UK has fought 5 major wars in Afghan. When UK intelligence infiltrated the US by controlling the media, and the Rothschild’s conquering our banks from within. This is how the UK-Empire made us fight their war against central Europeans for them in the 1940’s. https://en.wikipedia.org/wiki/First_Anglo-Afghan_War

If USA leave and Taliban win…will be easy for Russia and Iran do a war against Taliban :D Iran would nothing but this.

Why is the US military still in this country after 15 years? Osama Bin laden was eliminated. That should have been the end of US military involvement but no, the Einsteins and geniuses at the US State Department and Pentagon still want to continue the death, destruction and mayhem in this long suffering land. The people do not need any American assistance for that. I say give the Afghan government an ultimatum: either defeat the Taliban and any other anti-government militant group this year or we leave you to your own fate. Enough is enough.

Why US still there? A good question. The following statistic may explain. In the 15 years of US ministrations the Afghani slice of the global opiate (heroin mainly) trade went from about 5% to about 90%. Coincidence? I don’t think so. It is the unaccounted slush fund for various intelligence agencies. The sums are very large. And the expenses are paid by the tax-payer. What a perfect business.