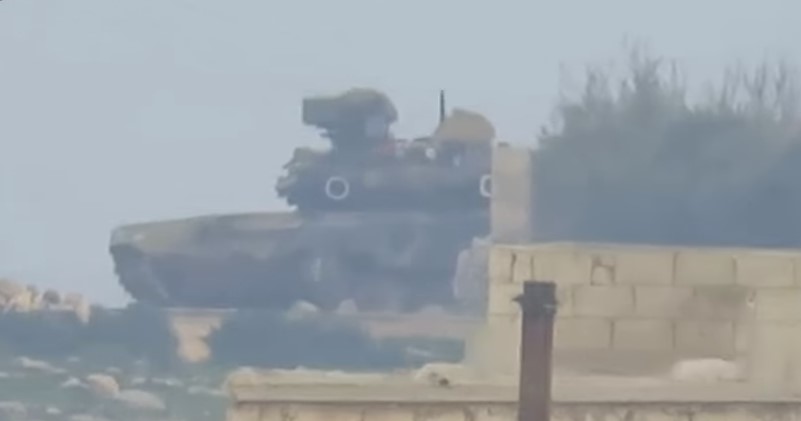 A video surfaced in the internet of a missile attack on a T-90 tank on Syria’s territory. The tank survived a hit by a US-made anti-tank missile. According to the specialists, the incident suggests the T-90s advantages over Western tanks.

The video shows the moment in which a US-made TOW ATGM strikes the T-90. The incident took place west of Aleppo, in rural areas where the SAA has been actively fighting against the Islamic State. The missile was fired by some “Desert Hawk brigade which apparently is part of the “moderate opposition” or, more specifically, to the Free Syrian Army.

“If that missile penetrated the armor, nobody inside the tank would have survived.”

Experts agree that the incident showcases the T-90’s advantages over Western tanks.

“The missile simply went off to the side”

The deputy director of Uralvagonzavod which manufactures the T-90, Vyacheslav Khalitov, notes that the video is too blurry so that it’s difficult to determine what vehicle it is, but it “closely resembles the T-90.” According to Khalitov, the video must have been composed of two parts. The first suggests that the Shtora optronic suppression system was effective because the missile “simply went off to the side.”

“Shtora is part of T-90s multi-layer protection. It is a subsystem designed to protect the vehicle against flare-tracked ATGMs,” Khalitov told Vzglyad.

According to Khalitov, the T-90 also has another protective system which detects an approaching missile by detecting the illuminating laser beam, and then launches a metallic aerosol grenade which disperses the laser beam thus depriving the enemy of the ability to guide the missile or estimate range using a laser rangefinder.

Khalitov also said that the second part of the video differs from the first one–the tank’s Shtora was not switched on which allowed the missile to strike its target but “then the reactive armor suite was activated which prevented the tank from suffering serious damage and the crew was able to leave it.”

“The tank remained operational after the missile hit. Reactive armor tiles destroy munitions striking the tank before they are able to penetrate the basic armor,” Khalitov noted.

He emphasized that the T-90 is  a survivable machine, which is confirmed both by testing and actual combat operations. “As long as the tank is provided with reactive armor tiles and not empty boxes, as has been known to happen, if all the defensive systems are functional and switched on, the vehicle is very survivable. Statistics of their use in combat has shown they are highly reliable and survivable, more so than their Western counterparts,” Khalitov claims.

Of course, one does have to qualify his statement by adding that a representative of the tank’s manufacturer could have hardly said anything else.

Colonel General Anatoliy Sitnov, Deputy Minister of Defense for Armaments, also says that the T-90s reactive armor allowed the crew to survive. “The crew survived. It means that the reactive armor worked. Had the armor been penetrated, nobody would have survived inside,” Sitnov told Vzglyad.

The modernized T-90MS tank was demonstrated three years ago. It contains a number of improvements “to satisfy potential customers.” It has a more powerful engine, a new air conditioner, thicker engine compartment armor, and a 12.7mm machine-gun in a remote-control turret mount.

Russia has been promoting that vehicle throughout the Middle East. Iran expressed interest in the T-90.

After the Russian campaign in Syria began, Syrian militants obtained over a hundred ATGMs, which caused the attacking Syrian forces lose  up to 10 armored vehicles a day. Videos published in October 2015 showed the rebels use US-made TOW ATGMs.

J.Hawk’s Comment: The T-90 in question most likely survived the attack, though one of its crewmembers, likely a Syrian army tanker who still has memories of operating early-model T-72s with thinner armor protection and often no reactive armor, likely instinctively jumped out of the tank fearing that the missile hit had scored a lethal hit which would soon result in a fire. The video also shows the Syrian tank crew in question is lacking in training–no matter how survivable the tank is, it is generally a bad idea to sit still in an exposed firing location for such a long period of time, because no tank completely invulnerable.

There was recently a report about a video that allegedly showed the Kurds using a Javelin missile against ISIS. This more advanced type of anti-tank missile hit its target from the top as most targets are there more vulnerable. There is some risk that rebels might get this type too.

It’s highly unlikely the video showed what it purported to show. The US would not have supplied that weapon to any Kurdish force, and the missile launcher shown in an associated photograph could be an Israeli Spike launcher (the Hezbollah surely captured or bought a few from the Israelis by now) or a mock-up created for propaganda use. The video itself could have been doctored to show a plunging missile whereas in actuality the vehicle was hit by something else. Besides, where there is one Javelin there would have to be more, so I’d wait to see whether similar attacks like that are reported and then analyze that evidence.

Thanks, that’s the photo I had in mind. Funny thing is, all I see is styrofoam and glass fiber. Oh, and a camera tripod! What I don’t see is any evidence of an actual missile, aiming devices, anything suggesting it’s an actual weapon and not a mock-up.

The Shtora System would have no effect on the TOW. The TOW is not a laser guided weapon, nor does it depend on painting the target with a laser beam. The TOW is Tube launched, Optically tracked, and Wire guided with a max range of 4 K. If the operator keeps his aiming point on the target, and nothing interrupts the thermal emitter in the rear of the missile or severs the guidance wires it’s going to hit the target. However, the TOW doesn’t have a follow through charge, and it does poorly against reactive armor.

Unless the thermal emitter emits a coded signal that cannot be spoofed by the Shtora (specifically, the two xenon lamps mounted to each side of the main gun, on the front of the turret), the Shtora should be able to have an effect on the TOW. The goal of the Shtora’s own emitters is to confuse the tracking system so that it sends the missile off course.

J.Hawk, Thermal emiter do not emits coded signal, termal emitter just lock on thermal source, u can hide thermal source, but i guess u must be kind of very fast, or use some hydrogen to spill over a tank. The Shtora System is copy of system used in Airplanes or any other IR interupting device like Anti road-radar systems in cars. Funny so chep and useful in military no body ever think of it, except russians who are known to try do something as cheap and simple as possible.

“nothing interrupts the thermal emitter” Those 2 ‘eyes’ on the turret are there to spoof the thermal emitter. You can see it here: http://www.youtube.com/watch?v=DNCRgWIhxJw ( notice the ‘eyes’ glowing ). But in this video the system was off, the hutches opened, crew playing with themselves in the middle of hostile territory…

The thermal emitter on the missile cannot be spoofed. The sensor in the sight locks onto the emitter, and doesn’t release that lock until impact. It might be possible to spoof the missiles sight/control unit, but the disrupting beam would have to target the sight unit itself. Needless to say, finding the TOW system (very small), and targeting the sight (tiny) at a range of up to 4 kilometers would be practically impossible. Remember, the TOW is 1970’s technology, and much of the new super duper whiz bang tech doesn’t work because the TOW is old, and stupid by modern standards. However, not to worry, the US is just disposing of inventory that’s at the end of its shelf life, and the US is too broke to buy many new toys for giveaways.

What I would have given for something like the T-90 when I was active in the craft. God, I love Russian armor, and most everything Russian, for that matter.

I fully endorse your statement Sir.

U mean like this one,,heh get your facts straight….

I’m not certain what facts you’re talking about. Unfortunately, I don’t speak the language in the video so it’s difficult for me to judge what’s happening. A miss like this can be caused by any number of things (smoke, dust, flares, mirage, bad bad sight calibration, gunner head space, etc.).

When I was using the TOW in Vietnam, and later as a TOW instructor, I became rather familiar with the system. Granted, that was many years back. I retired over 20 years ago, and there may be improvements to the systems that I’m not aware of. Regardless, the main principals still apply: Don’t fire over water (shorts the control wires). Don’t aim at the sun or fire with flares in the line of sight (overwhelms the sight sensors). Don’t fire into defensive smoke (metallic particles confuse sight). Stay on the sight until impact (tankers are trained to shoot at the launcher location to distract the gunner). There are many other subjects in the gunners POI, and there are numerous reasons that the gunner can loose control of the missile. In this instance it could be that the gunner just missed.

My facts come from learning, and battlefield experience. Perhaps you have recent combat experience or training on the TOW. If so, please share your knowledge with the group.

shtora jams the TOW guidance system by presenting the guidance unit with false missile guiding lights – that way the tube thinks it’s tracking the missile back light while instead is tracking a false one.

MBT’s are not designed to fight in built up areas .Assault guns are better suited for that type of environment ,they don’t require the speed or mobility and they can pack a bigger punch.

I’m still wondering why Moscow hasn’t supplied Syrian forces with BMPT Terminators. Those were designed specifically for urban combat, with all the lessons learned from first Chechen war and Afghanistan.

The Russian army has no plans to procure them so no sensitive info would be lost to their adversaries, and it’s primary export armour. I think the BMPT would excel T-90 in the war.