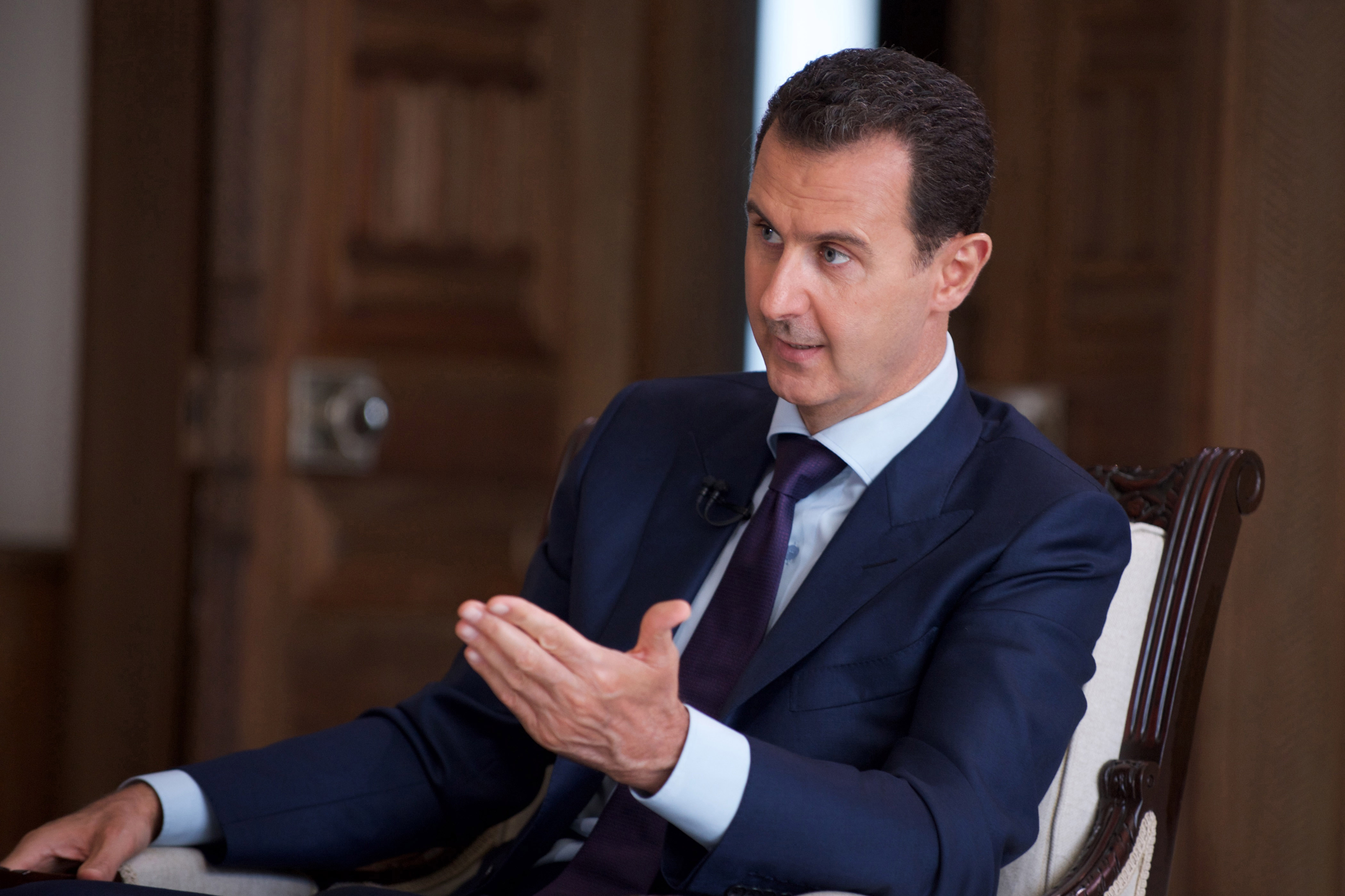 Syria’s President Bashar al-Assad is preparing to pay an official visit to Iraq this month or in upcoming May, the Iraqi al-Ghad Press reported on April 4, citing Iraqi political sources.

“The perpetration for the visit are being made by senior Iraqi, Iranian and Lebanese figures in coordination with prominent Syrian officials,” al-Ghad Press quoted one of the sources as saying.

The source said that Iraq’ President, Barham Salih, Prime Minister, Adil Abdul-Mahdi, and Speaker of the Parliament, Mohamed al-Halbousi, are warred that al-Assad visit could anger Washington, that’s rejecting any restorations of relations with the Damascus government.

The last few months witnessed an improvement in the already good relations between Iraq and Syria. In mid-March, Chief of Staff of the Iraqi Armed Forces, Othman Al-Ghanimi, visited Damascus, where he held a meeting with his Syria and Iranian counterparts.

The Syrian Presidency Office has not commented on these claims so far. However, it’s well-known that Damascus does not pre-announce al-Assad trips due to security reasons.

in particular should be discussed how the squatters shall be evicted once and for all – the new alliance between turkey and iran and qatar’s money enhanced by syria, hezbollah and iraq should be in a position to finish off the squatters post haste. just get rid of them.

and don’t think that putin in any way would come to the defense of the squatters.no one will so they’ll have to swim along way for safe land – whoawhoa.

Well, your in for a disappoitment. Putin has decladed already multiple times that Russia will always defend Israel if it is threatend in its existence. Just like NATO meaning the US/UK will do. If you are ready for a sober look at reality, read Elija J. Maginers latest blog post, that clearly lays out why even the Golan will not be liberated for decades to come. Believing Isreal would in any reality cease its existence by force from a neighbour state, is just delusional, if one looks at the millitary and geopolitical reality, like it or not. The only possible way for a change on the ground is political pressure, according to international law. Meaning a US president that forces Isreal back into international law. Until then, no chance. Everything else is propaganda and whishfull thinking.

But hate does make one blind, heh? And judging from your post, in reality you dont give a shit about Syria, about Palestinians, let alone jews that oppose the Zionist idology. You just love your hate.. So keep dreaming if it makes you feel better. PS: Werner is written with a “W” not “V”. Just so you know..

You either don’t understand international law or are ignoring it. The Turks led the creation of a UN mandated protection force as outlined in the UN General Secretary’s report required by the Turk’s resolution. This provides the frame work for a regional force armed with nuclear weapons to keep the US at bay and clear the IDF out of the occupied territories and police the resolutions that Israel is in violation of. Like the right of return. So that Israel can be voted out of existence. And Palestine can be dejudified and unified so that Israel, Jews and Judaism go extinct in Palestine. Which would be a good thing for the region and humanity.

Well, i am just stating what is REALISTIC, not some pipe dream or PR stunt. The Turks are the MENA country that has for decades been the most supportive to NATO and therefore US/Israel, and just like the empty declerations of the Arab world’s leaders, they say much but in the end are loyal to the US and the $. They pretend like the care about Palestine, but just like the Saudis, the Turks are only loyal to themselves. And again: The US+Russia have always declaed they will protect Israels existence with their millitary might, meaning the A-Bomb if needed. So any army that attacks Israel will be utterly destroyed, if they even have the chance to end the exinstance of Israel. Thats not my idea, but the reality. So in the geo polictal reality of today, the only chance to chance Israels course even slightly in regard to any occupied territory would be to have a US president in power who forces Israel to chance and a Russian president who is not oppenly supportive to Isreael like Putin is. And even then, only when then US+Russia plus most western nations force Israel to accept that they have to give back occupied territorys according to the UNSC resolutions there CAN be change. Again, not my idea, but the reality on the international geo political situation. And i stand by that, everything else is an illusion.

You’re ignoring reality and living in an illusion. The reality is that Israel’s neighbors have been at near constant war with it. Such as the Egyptians alone being involved in 4 wars. And the Syrians recently shooting down Israeli aircraft and striking IDF positions in the occupied territories with Russian weapons supported by Russia. As well as the Palestinians hitting Israel proper on a regular basis.

Israel needs to go away and not come back. The planet needs to be dejudified. Judaism is a criminal organization and evil pedophile rape cult that needs to be extinct.

“In an emergency meeting on Wednesday, the United Nations General Assembly adopted an Arab-sponsored resolution calling for greater protection for Palestinians …

The resolution was adopted by a vote of 120 in favour, 8 against, with 45 abstentions.”

a) I am pleased to see that you think you know how to spell a name – but in this particular case you’re as wrong as a jew in a mosque in medina.

I have never heard or read in the 28 years Putins been around that he in any way favours the squatters – in fact I think it is evidently wrong since there is no need for Putin to have a view on the squatters as long as they don’t interfere with his plans. the balance between the two is best clarified by the fact that netanyahu travels to moscow to beg for something and also that he has been caught lying coming back and which moscow kindly has pointed out. that fact leaves quite a different view of the matter than what netanyahu claims is the case.

and I am quite certain that Putin has a good idea of who started the syrian debacle (moronistan’s (aka usa) and israel) and he would be quite prepared to take side should it come to that, I think you would be most disappointed when he would chose not the squatters but the alliance between turkey, iran, syria,hezbollah and iraq and backstopped by russia. from russia’s point of view, that alliance has more to offer than the squatters and the fact that a large percentage of the squatters hail from russia, jewish to the core, wouldn’t change his view at all. truth is they were disliked when they left and no one missed them and that is a basic fact in the situation.

but it is always fun to see netanyahu beg and beg, cause that’s what he’s doing. .

Iraq is obviously the primary party to the partition of Syria by allowing it’s land and airspace to be utilized by the US for air strikes against the Syrian government coalition and war material and troops to be transported from Iraqi Kurdistan into Syria. Which is the only thing preventing Syrian government coalition advances into SDF held territory to end the partition.

Getting this issue resolved in Syria’s favor would go a long ways towards shutting down the partition project and getting the US out of NE Syria without hostilities. The Kurds will quickly come to the negotiating table rather than fight both the Turks and the Syrian government coalition in a two front war. Just like they did after the US troop withdrawal announcement.

Iran, Iraq, Syria and Lebanon are now intrinsically linked at all levels and this strategic alliance will only deepen further as regional dynamics shift and Yemen is also included. The Shia now are a strong overwhelming majority in the real Arab world of Mesopotamia and Persian region. Egypt is the most populous country of Africa and no much to do with Arabs as it has sold out to Zionists, the Turkeys are nominal Sunnis of Wahhabi AKP funding and not part of the Arab world either, so that only leaves a real Shia crescent in the Arab world of Middle East with Persian Iran as its power center. The Persians with the sheer dint of their size and cohesive population have dominated the region for over 3,000 years, and now the Shia demographic shift has made it permanent.

That’s confidence, he has no worries about his personal security during his upcoming visit to Iraq, even though the US is still operating there with all sorts of nasty weapons, is he brave, confident, or stupid. The Arab league have pulled off another miracle, and still not a peep from the media, mmmm. The first miracle was back in June last year when they convinced the US, Israel and the EU to change the mantra from “Assad has to go” to “Assad can stay”, and now they’ve also delivered immunity from assassination to Assad as well, another unreported on miracle from the Arab league. Does anyone really believe the best prepared Iraqi and Iranian security measures could really stop an assassination attempt by the US or Israel if they really wanted to hit Assad, especially while visiting a US occupied country infested with assassination drones, I don’t, but the Arab League’s diplomatic measures will protect him like a dome of steel while he’s there, well done gentlemen, the LGBTQI media don’t recognise your efforts, but some of us do. Soon the US will get its marching orders from Iraq too, they’ve long overstayed their welcome there and the Iraqis and the Arab league are now doing what they can to expedite the withdrawal of US forces out of Iraq as well, and I think they’ll win out in Iraq too, I’m getting ready to hear the League’s next big demand, ‘US forces are not needed in Iraq’. They’ll have to change their name from the Arab league to the League of Extraordinary Gentlemen soon, that’s if they keep pulling of miracles like these. Cooperation against a common enemy, that’s what the league was originally formed to do, not to fight amongst themselves, and definitely not to prostitute themselves off to either the US, Israel or the EU, but not anymore they don’t, we have a new and improved League now. Assad’s biggest worry while visiting Iraq will be the Turks and Isis, not the US and Israel.

Seriously, let a plastic surgeon smash your ugly Jew honker, gratis at US taxpayers expense. I kid you not, you give the term filthy ugly Jew a new meaning :)