A picture taken on March 12, 2017 shows a road sign reading in Arabic “Road to Jadidah” (TOP) and “Road to Iraq” (BOTTOM), in the area around Arar city along the Saudi-Iraq border. (File/AFP)

The Iraqi Border Ports Authority announced on November 18 that the Arar border crossing with Saudi Arabia had been reopened.

The Arar crossing has been closed since 1990, when the forces of the then-president Saddam Hussein invaded Kuwait provoking the first Gulf War.

In an official statement, the Iraqi Border Ports Authority said the crossing is now open for “trade exchange between the two brotherly countries.”

“Interior Minister Othman Al-Ghanmi deputized for Prime Minister Mustafa Al-Kadhimi, and the inauguration took place in the presence of the Deputy Commander of Joint Operations Lt. Gen. Abdul Amir Al-Shammari and Major General Omar Adnan Al-Waeli, Chairman of the Border Ports Authority, the Governors of Anbar and Karbala, and my leaders Anbar and Border Police,” the statement reads, according to the Iraqi News Agency.

The ceremony was also attended by Saudi Ambassador in Baghdad Abdulaziz Alshamri and a number of other officials from the Kingdom.

Iraq and Saudi Arabia have been preparing to reopen the Arar border crossing since May. The reopening of the crossing is a symbol of the improving ties between the two countries, whose relations were tense for the last 30 years. The reopening of the crossing will reportedly have a good impact on Syria’s struggling economy.This will facilitate Syrian legal and illegal traffic, including weapons, drugs and humans.

According to several media sources, Saudi Arabia, which lifted a ban on shipping from Syria earlier this year, had asked Iraq to facilitate the passage of Syrian goods through Arar.

Syrian exports to the Gulf, including Saudi Arabia, are now being shipped through Jordan, which impose high taxes on Syrian-made goods. The new route through Iraq should lower the cost and time of shipping from Syria to the Kingdom.

“The transit of goods and trucks from Syria to Gulf states and vice versa through the Arar border crossing is considered better and faster than moving through Jordan’s territory,” Hassan Ajam, co-chairman of the Union of International Cargo Shipping Companies in Syria, told Sputnik.

The reopening of a direct shipping route between Syria and Saudi Arabia through Iraq’s territory may be a sign of a near rapprochement between Riyadh and Damascus.

“The reopening of the crossing will reportedly have a good impact on Syria’s struggling economy.This will facilitate Syrian legal and illegal traffic, including weapons, drugs and humans.”

When the shadow economy is actually bigger than the offical one, this is both funny and important.
Life is always pretty cynic, but mostly so in MENA.
;)

yea terrorists always smuggle TOW missiles through border crossings since there is no tax on them..

not as corrupt as America where US govt reports 800,000 children go missing each year–sold in Thailand or Topeka and most workers receive no vacation or sick leave or health benefits

Real worl economy is way too big,too fast and too strong for the inept new worldly fake stocks,
This too invariably destroys cia/4th reights covert phaedo reserve tyranny,infact look insomuch how rebellion against nwo/facist policys are to become redundant,null an void,no future in us petrodolla!
Sadman insane was a cia asset,like the other cretin whom got blown outta the fkn way too,either way
with or without trump the petrodolla is doomed and there shall be no 4th reicht slime digital conscript who assume people of planet earths to rely only on their fake currencys + aka bitcion fror bransens,
better late than never,pre 1990 policys were far more enterprising for reality workers whom untill then factually built 99% of modern days feasable products,where todays not single apple phone built sht! 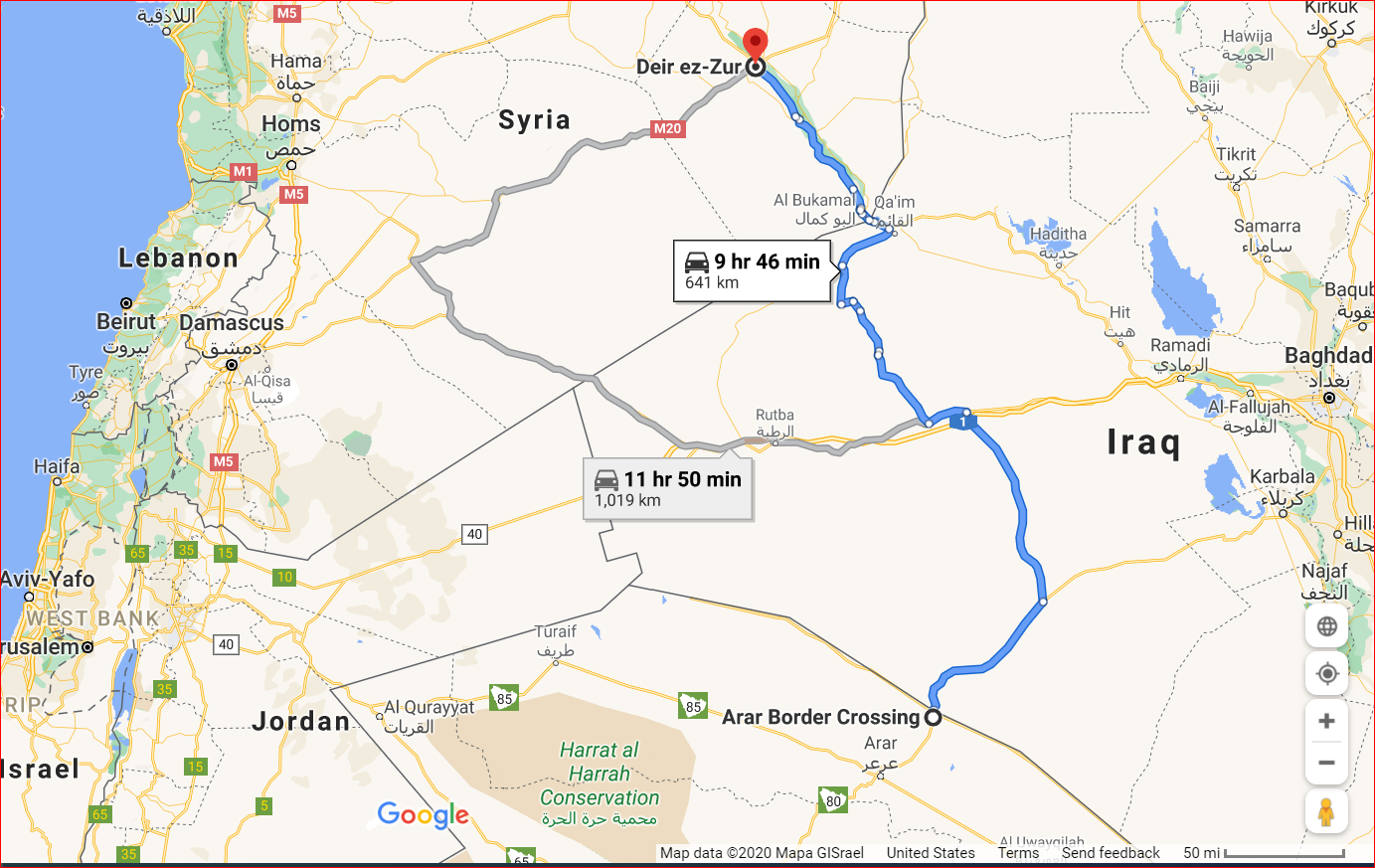 It’s just a pity the western route has the US base stuck near the highway, it’s a long way to Damascus when you can’t use the shortest route.

What will Iran think of this, I can’t imagine they’ll be pleased with either of their allies doing business with the Saudis, just reopening a highway crossing may not sound like much but I’m sure the Iranian’s will be having nightmares over it.
But who cares about any of that, it’s just great news for Syria at exactly the right time it’s needed most, one of the civilian populations biggest grievance with the Government now is economic concerns and this will certainly help in that regard, well fed and cared for civilians are less likely to revolt.
But it’s a long way around with that US base at Al Tanf stuck in the way, so it’s time the Saudis put their money where their mouths are and did a bit more to help Assad get rid of that US base, or at the very least let the Government reopen the highway there, that’d save everyone even more money and time.